Tuesday Cain and dad Billy spoke to Salon about the double meaning behind their famous sign, and their next move 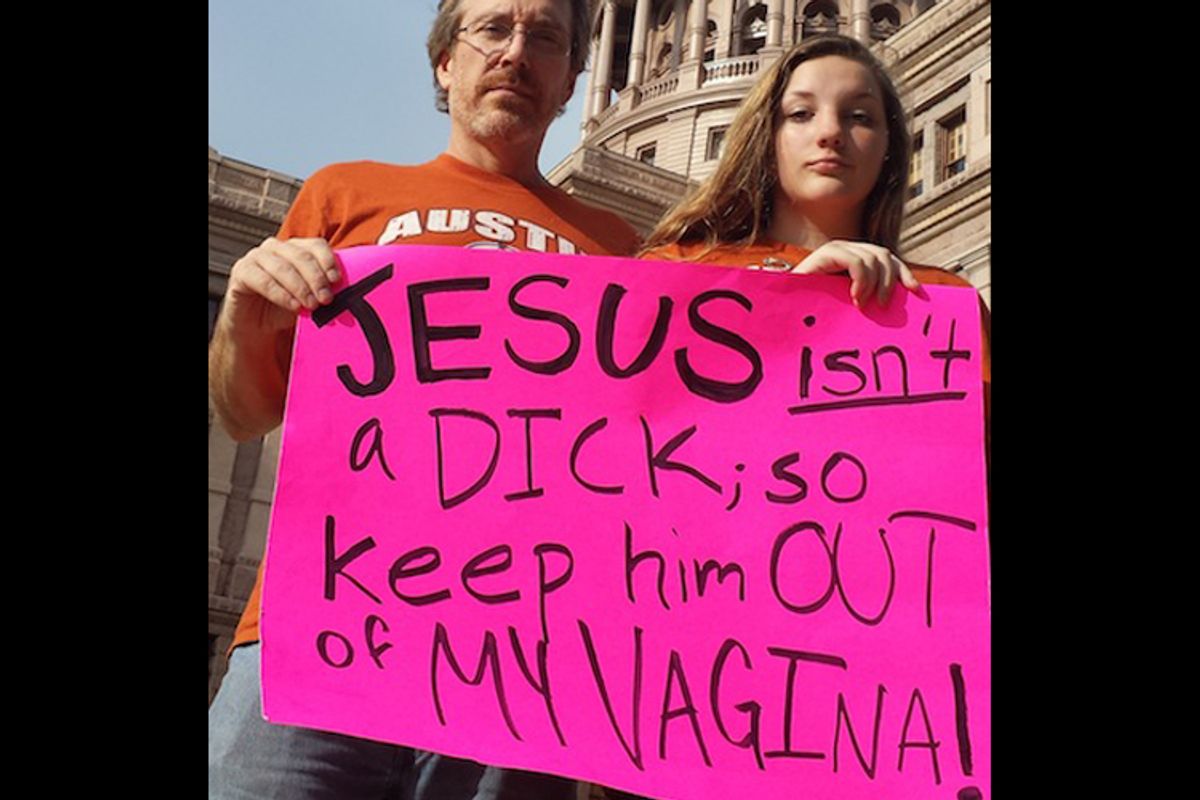 It was the dick joke heard 'round the world.

After days spent demonstrating against Texas' sweeping new abortion restrictions and watching as reproductive rights opponents used religion as a justification for bludgeoning women's access to basic health care, Tuesday Cain grabbed a piece of pink poster board and wrote down her take on the situation: "Jesus isn't a dick; so keep him out of my vagina."

The 14-year-old Texan wanted her message to state lawmakers to get people talking -- and that's exactly what it did. An image of the sign quickly went viral, igniting a storm of cheers and criticism from all corners of the Internet, and keeping the nation's attention focused on Texas for yet another news cycle.

Tuesday's dad, Billy, has been at his daughter's side through it all, giving her cheeky sign the green light (Tuesday wanted to make sure it was OK to use profanity for a good cause), and becoming his daughter's biggest defender when some on social media began to hurl insults at the young activist.

The father-daughter pair spoke with Salon about what brought them to the Capitol, their surprise over what a strong response Tuesday's sign generated and why speaking your mind is a Cain family value.

Billy, you've mentioned before that it was while watching the people's filibuster -- the moment when reproductive rights advocates in the Senate gallery erupted to halt the vote on SB 1 -- that you were first inspired to join the protests in Austin. Why is that?

As soon as [state Sen.] Leticia Van De Putte said, “At what point must a female senator raise her hand or her voice to be recognized over her male colleagues?” …  As soon as she said that, everyone in the gallery started freaking out and I thought, “Oh my god, I have to wake up my daughter!”

We've done that during other important events -- kind of moon landing stuff. Those are really important moments for us.

Tuesday, what was your reaction to it?

Why did you decide to go to the Capitol?

Tuesday: After that, we started following the protests every day. It was getting so out of hand that we finally decided, "You know what? We should go down there. Let’s ‘Stand with Wendy.’”

Billy: Once I found out that they were going to call another special session, I thought, "This is just never going to stop.” They [state Republicans, including Gov. Rick Perry] said they were going to pass the bill no matter what, so we felt strongly that we had to go down there to show support for women's rights. When I started discussing the possibility with my wife, Tuesday was like, "You bet I want to go down there with you!"

She does have a set of ovaries, you know? She has a stake in the game.

But what I think is so compelling, Billy, is that you don't have a set of ovaries, and yet you see yourself as having a real stake in the game, too. You are part of what seems to be a growing contingent of Texas men taking up this fight as their own. Do you have a history in these issues or was this extreme abortion ban an awakening moment for you, too?

I've always been a proponent of individual rights. I think my political views had always been towards freedom and individual rights, so this particular moment struck a nerve. This is something that women have fought long and hard for, and won access to, for decades. The world has been transformed by those victories, by birth control being available, by women having the ability to have careers.

When you see people trying to take those rights away -- when we're in a situation where women are viewed as cattle, and all pregnancies could be forced to come to term --  we're going to lose those gains. It's going to drag us back down.

When I see men trying to strangle women's opportunities, it just drives me crazy. To me, this issue is a no-brainer: these lawmakers want to see women turned back into property.

Tuesday, you had been at the protest for a couple of days before making the dick joke heard 'round the world. Was there anything about the experience of being at the Capitol that inspired you to make such a bold statement?

Tuesday: It wasn't a master plan to make a big blowout, but on the fourth day that I was there we brought a bunch of blank posters and markers to make a sign and, I don't know, the thought just kind of crossed my mind and I asked my dad if I could do it. He said it was a fine idea, and I just made the sign right there in the hallway. That was that.

Billy: And the sign was also a response to so many of the anti-choice people there using Jesus to advance hateful things. It's like, dude, Jesus wasn't a dick!

Tuesday: I know! One sign said that having an abortion means you'll go right to hell. I mean, where is that in the Bible, really? I've read the entire Bible the whole way through and not once have I seen anything that said, "Hey guys, I'm going to send you to hell if you have an abortion. Love, Jesus!"

Exactly! The sign is a great joke, but there's also a subtly affirming message behind it, too. Though, clearly, the Internet had a less nuanced read on it, and the vitriol being lobbed at you got pretty outrageous. Was the atmosphere at the Capitol also confrontational?

Tuesday: Every time I went, just wearing an orange shirt [a symbol of being in support of reproductive rights and against the abortion law], anti-choice protesters looked down on me.

Obviously you met some aggressive types, but I'll bet there was a ton of support, too.

Billy: The thing that's amazed me is that there has been an enormous amount of positive support, but the problem is that what becomes the news is the negative feedback, the people who are just trolling.

The sign was a really a clever way to invite people to talk about the actual issue and what is really at stake right now in Texas. But the the thing that's been so interesting is that Tuesday's critics, the adults calling her a “whore” on Twitter, for example, are all focusing on the sign, and not the actual policies that prompted her to make it. Those policies, to me, are actually quite a bit more dangerous than a 14-year-old uttering the word "dick."

Billy: The sign has nothing on these policies! It's unfathomable what these lawmakers are trying to do.

And of course these laws are part of a much larger problem in Texas, and scarce access to reproductive health care is only part of it. Sex education in the public school system is tremendously regressive, and Texas has one of the highest teen pregnancy rates in the country. Tuesday, what has your experience in school been like? Is comprehensive sex education something you’ve talked about in your health classes?

Tuesday: I've been to a few different schools, actually, and it's a mix. I went to a school where it was absolutely taboo to even mention sexual contact. Even in health classes! They don't go over basic ways to take care of yourself, contraception, all of those things, just because they think "Oh no, children can't know about those things! They're too young!" When the reality is that teenagers are having sex, and no one is teaching them how to do it safely. It's terrible.

Some people seem genuinely shocked when they see teenagers who are politically engaged. Have people been puzzled by your age and your level of awareness?

Tuesday: I have gotten a ton of messages from people saying "Why are you doing this? Stay out of this, you have no say." But, in my opinion, I think people should be supportive of [teenagers becoming politically active]. Wouldn't they support their own kids getting involved in issues they cared about, doing what they felt was right?

I think there's also something really powerful about you two as a pair. You are two parts of this movement that are often overlooked: young people and men. You are a counterpoint, really, to those who want to minimize the reach and depth of the movement growing in Texas right now.

Billy: I hadn't really put that together. It never occurred to me inside the bubble. But hey, this is an older guy and a younger woman -- his daughter -- and they are fighting for all the women in between.

Tuesday, is this the beginning of something bigger for you?

Tuesday: I've definitely learned a lot about politics. I've learned a lot about protest. I've learned all sorts of things from all sorts of people, people contacting me to tell me their stories, share their wisdom. And because I don't see any of these bills stopping or slowing down anytime soon, I'll continue to fight for women's rights and women's equality. And other things, too.

And what about you, Billy? Are you and Tuesday forming a father-daughter team to fight for justice and righteousness in Texas?

Tuesday: We could get capes and stuff!

Billy: We are not having capes! You saw “The Incredibles”! Capes always get stuck in jet engines and stuff!

Tuesday: That is a good point.

Billy: I mean, I've always been outspoken. This is just the first time that I've really had the time to go and do anything about it. And Tuesday had lightning strike her with that sign. It did exactly what she wanted it to do -- start a conversation.

If Tuesday wants to keep doing stuff, I am going to have her back. Even if I disagreed with what she's doing, I'd still support her. I'd pack her a sack lunch and support her decision to go fight for what she thinks is right.

Tuesday, any response to the people trying to stop you from speaking your mind?

Tuesday: It sounds weird but I kind of want to tell them, "Thank you for being mean." All they've done is made everyone stick together. I feel like because they've been mean to me it's made it so that more people believe in our cause. It's made us stronger. I feel like I want to say thank you for that!

Though some of the hate messages -- it's hard for me not to go grammar crazy on them when they make spelling mistakes, though!

Billy: The thing that's important in the overall scheme of things is that this fight isn't over. It's coming to a state near you -- it's already there. There are like 300 bills being introduced all across the United States. It's outrageous.

People have to wake up. We need public debate -- as long as it's not all about the wording on the sign. We want to keep focusing on the future and the fight for women's rights, not about using the word "dick."