As the new season draws near, a look back at Walter White's most involved contrivances and concoctions 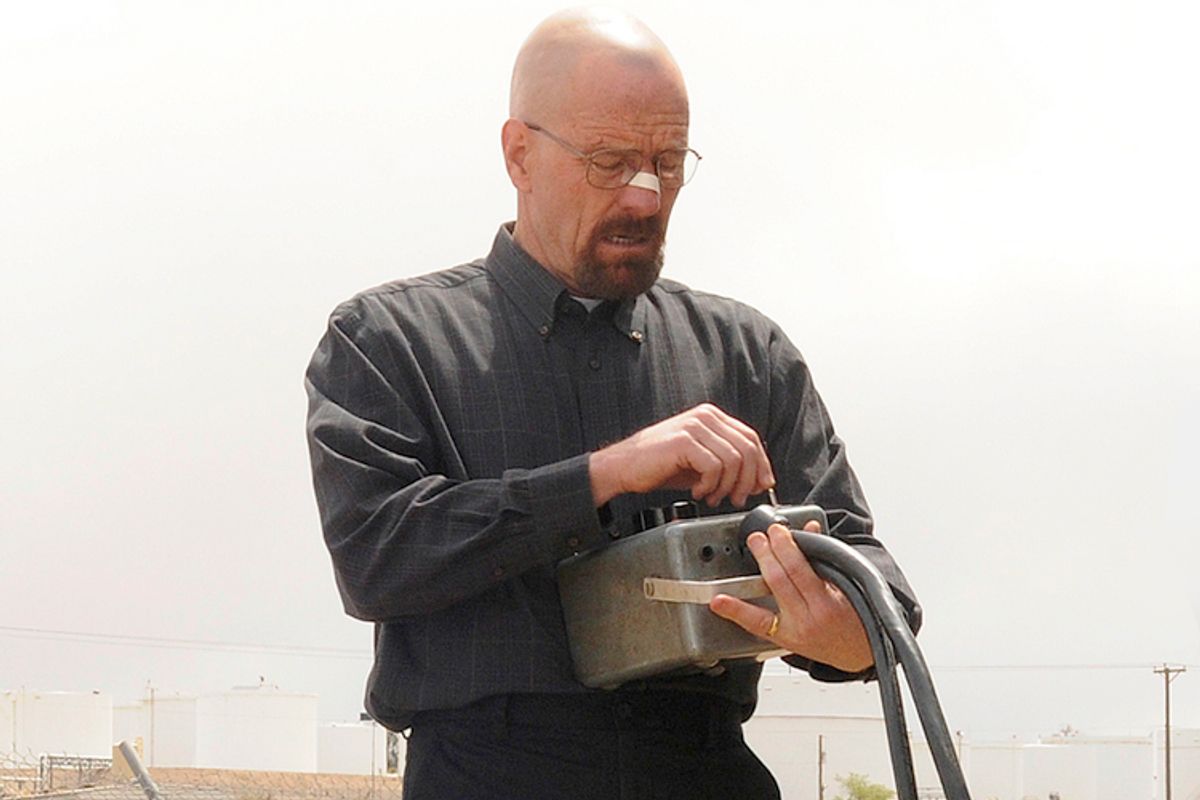 Remember Angus MacGyver, that mulleted 1980s action hero who, with each episode, combined everyday objects with his masterful knowledge of the physical sciences to get himself out of a pickle? A comedienne once quipped that he could “make a bomb from a tampon and some hand lotion.”

Much like "MacGyver," every "Breaking Bad" episode has Walter White relying upon his bottomless stash of chemistry facts and creativity to solve life-or-death problems. (Of course, one series features an all-American hero, and the other shows a man spiraling into the evil antihero whose death we cannot wait to see.)

Beyond the brilliant and dark premise of the show (genius and nerdy high school chemistry teacher gets diagnosed with lung cancer, becomes a murderous crystal meth kingpin to provide for his family), the writers need to surprise us with each episode. Often the first solution to a problem fails, requiring Walter to think on his feet and come up with a new and cleverer answer.

With the new season upon us in just a few short weeks, let’s recount the top ten moments (and we mean "top" dramatically, not morally) where Walter White channels his inner MacGyver. Warning: For those who aren't caught up, spoilers follow.

So Walter creates a new recipe that’s not dependent upon pseudoephedrine, but rather the phenylacetone in a tube furnace. Then he uses reductive amination to produce methamphetamine, and of course, methylamine. Easy, right?

It’s every bit as chemically pure as Walter’s original recipe. As Jesse says, "Yeah science!," all of Albuquerque gets hooked on the stuff.

9. Rigging a bomb to an old man's bell

By this point, Walter has alienated himself from Jesse and become locked into a game of mortal chess with Gus, his former boss who is just as methodically cold and conniving as he is – yet better dressed. To off his rival, Walter makes both a car bomb and detonator in his kitchen. The problem is that Gus has a sixth sense for ambush, which thwarts the initial plan of blowing up his Volvo.

So Walt leverages Gus’s internecine relationship with Don Hector “Tio” Salamanca, who uses a wheelchair and communicates through a bell (as well as through grimaces and bowel movements). Walt lures Gus to Tio’s convalescent home by first convincing the old man to visit the DEA. When word of this reaches Gus, he’s compelled to visit Tio and stick him with a syringe full of what we can only assume is a fatal substance.

However, Walt has rigged the bomb to Tio’s bell. As Gus is about to inject Tio, the old man repeatedly dings the bell – its suddenly muffled tone giving viewers a clue that something terribly wrong is about to happen.

After the bomb explodes, Gus seems to emerge from the room without a scratch, as if he’s some kind of immortal creature. The camera pans around while he shows his final signature gesture of straightening his tie… and half of his face is missing. Checkmate.

“Why in God’s name would I poison a child?” Walter asks as Jesse points a gun at him. The answer is that he surreptitiously did so with Lily of the Valley berries because Jesse, childlike in many ways (zero impulse control, fascinated with bugs, plays peekaboo with a toddler after witnessing one of the kid’s drug-addled parents crush the other’s head with a stolen ATM), will kill anyone who harms a kid.

Walter is able to convince Jesse that Gus was the real child-poisoner in order to maneuver Jesse into killing Gus, his former partner. This brings Jesse back to Walter’s side, and they ultimately team up to eliminate Gus.

Not only does Walter know the lethal potential of the berries, but he also possesses the cunning to manipulate the relatively moral Jesse into helping off his rival.

Bonus creepiness the following season when Walter sits next to the child, Brock, and watches him.

7. Pulling off a train heist

Here’s a major problem – the methylamine is all gone. So Walter’s gang decides to pull off good ol' fashioned train heist!

This wasn’t Walter White’s idea – it was actually Lydia’s, as her job grants her access to the methylamine shipment schedule. Because the methylamine tanker will be weighed at its destination, Jesse figures out that replacing the stolen weight of methylamine with water will prevent anyone from discovering the robbery. While digging the ditches for the tanks, Walter gives us the science lesson and takes care of the details, such as anticipating the watered-down methylamine will be blamed on China.

Such foresight ensures that the shenanigans go down without a hitch, as always.

6. Letting Jane choke on her own vomit

There’s actually no science here -- just spur-of-the-moment, cold rationality masked as indecision. Jesse's junkie girlfriend, Jane, has become a major problem, whipping Jesse into siding against Walter. He stands by helplessly as she blackmails Walter for Jesse's share of the latest drug deal -- $480,000 to be exact.

When Walter inadvertently flips her on her back while she’s in a heroin slumber, he then watches her choke on her own vomit. Problem solved.

It’s another dent in Walter’s moral compass. And all this occurs while Walter is on an errand buying diapers for his newborn daughter.

5. Escaping a handcuff with electricity

To get themselves out of the business, Mike and Jesse make an all-or-nothing deal to sell off the thousand gallons of stolen methylamine to a competitor. However, Walter reveals that he’s in neither the meth nor the money business, but “in the empire business.” Deciding Walter cannot be trusted to go through with the deal, Mike handcuffs him to a radiator and leaves him alone with the supply.

Walter sees a glass coffee pot, which he tries to break into shards. But it only bounces intact and rolls out of reach. So Walter chews through the pot's power cord and proceeds to burn through the cuff with the electrical arc.

4. Making an RV battery from loose change, sponges and copper

For the first two seasons, that rickety RV is almost as much of a character as Walter and Jesse. It’s practically the third partner in their trade.

During a monster meth cooking session in the middle of the desert, Jesse leaves the keys in the ignition and drains the battery. Then their generator catches on fire, which causes Jesse to dump their only water supply all over it. If they don’t figure out a way to get out of the desert, they will die of dehydration. Or worse – Walt will miss his diversion flight and Skyler will give him hell.

When Jesse demands that his partner “cut out all your loser crybaby crap right now and think of something scientific,” Walter fashions a battery from loose change, nuts, and bolts, which contain galvanized or solid zinc. Then he uses the brake pads as a source for mercuric oxide and graphite to jump the engine.

Eventually, the RV starts and they live to cook another day.

3. Exploiting the powers of ricin

Ricin: so easy to make (if you’re a genius like Walter White), it appears in many episodes, yet it never really causes much damage. Still, it’s Walt’s preferred killing method, since it's slow-acting and “easy to overlook during an autopsy," and can be made with just a handful of beans.

The poison first appears in Season 2 when Walter and Jesse try to trick Tuco into smoking ricin-laced meth, only to have Jesse’s mouth ruin the plan. Then they season Tuco’s burrito with the stuff, only to have Tio’s bell thwart this attempt.

Walter creates it again in Season 4, in Gus Fring’s lab, because he knows that he’s on borrowed time with the boss. The poison is placed in a cigarette to be used on Gus. Jesse later demands the ricin to off the rival dealers responsible for Combo’s death, but Walter refuses. For a few moments, we thought that Gus used the rare poison on little Brock.

One of the great elements of the show is that the writers waste no time in making everything go to hell for the protagonists. While sitting on the toilet that flushed the melted remains of his captive’s partner, Walter composes a pro-and-con list of whether or not he should kill Krazy-8.

The column called "Let Him Live" lists many reasons ("It's the moral thing to do," "Post-traumatic stress," and finally "MURDER IS WRONG!"), and the other -- called "Kill Him" -- has only one ("He'll kill your entire family if you let him go"). Walter equivocates until he receives a sign in the form of a missing broken plate shard. This becomes his cue that his new occupation requires him to adopt a kill-or-be-killed mentality.

As he’s about to strangle Krazy-8 with a bicycle u-lock, tears stream from his eyes with the regret of the impending murder -- and the amoral man he'll need to become to play the meth business.

When Jesse returns to the house, the eerie quiet and a vanished Krazy-8 are his first glimpses into nerdy Mr. White's ruthlessness.

After Tuco beats the crystal-crusted snot out of Jesse, Walter White confronts the sociopathic thug, demanding payment for both the stolen meth and for Jesse's pain and suffering.

Tuco laughs at the old dude as if he were a court jester placed in his office for entertainment. Walter places a block of the rock on Tuco's desk, only it's not meth. It's mercury fulminate – highly explosive and sensitive to shock. Walter then hurls it in slow motion to cause an explosion. Then he threatens to detonate the rest of the fraudulent meth bag.

The explosive chemical’s make-up first appears on Mr. White’s chalkboard in the beginning of the episode -- a classic example of Chekhov’s gun.

In addition to transforming the very product that drives the series into a weapon, what makes this moment and episode number one is that this is where Walter first morphs into his alter ego – Heisenberg. From then on, it’s all shootouts and shoot ups for one hell of a series.