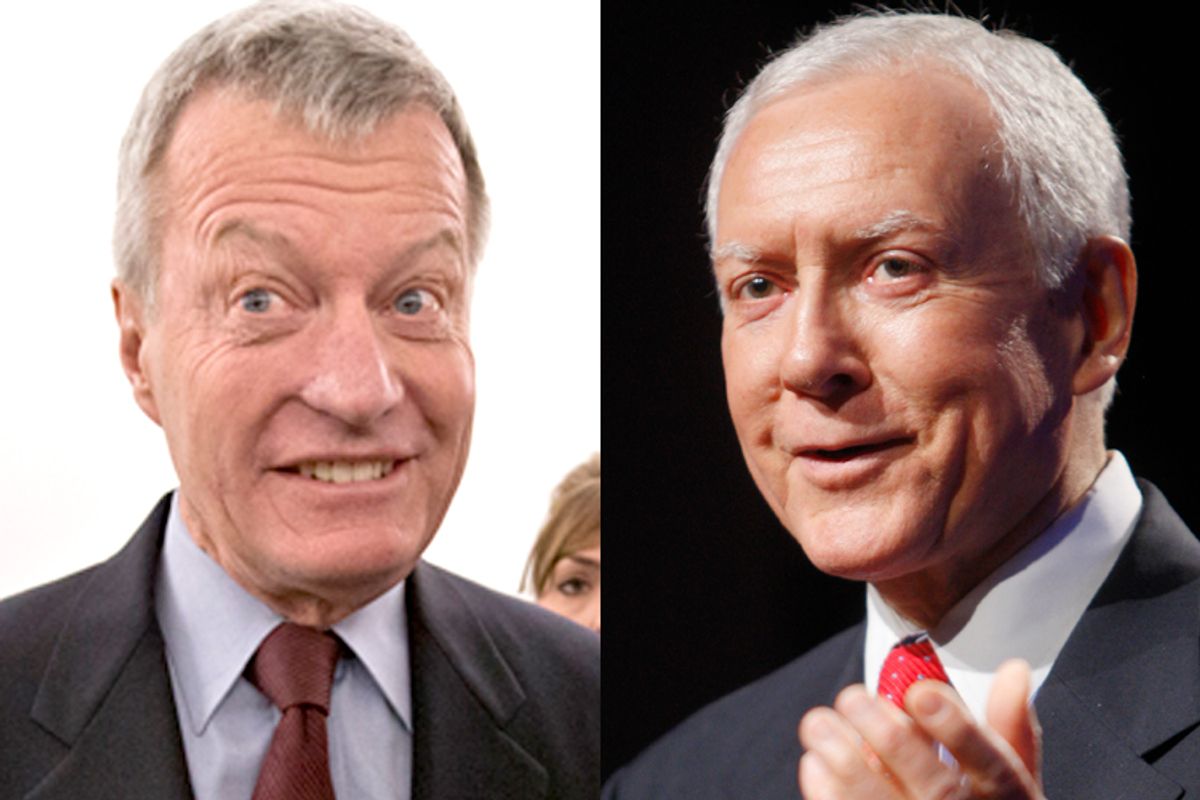 With more and more operations of the executive and judiciary branches happening behind closed doors and out of public view, the legislative branch was bound to join Washington's secrecy-fest at some point. That point apparently is now.

As The Hill reports, the U.S. Senate's "top tax writers have promised their colleagues 50 years worth of secrecy in exchange for suggestions on what deductions and credits to preserve" in a tax "reform" bill that aims to overhaul the tax code from scratch. The system, reports the newspaper, allows only 10 congressional staff members to have "direct access to a senator’s written suggestions" and "each submission will be given its own ID number and be kept on password-protected servers, with printed versions kept in locked safes" in the National Archives until the end of 2064.

The architects of this scheme, Senators Max Baucus (D-MT) and Orrin Hatch (R-UT) suggest that secrecy is the best way to facilitate input from all senators, as lawmakers will know they can make substantive suggestions without the fear of political retribution.

An optimist might initially see some merit to that logic - after all, as the Hill notes, there is "enormous pressure being brought to bear by K Street lobbyists, who are working furiously to protect their clients and the tax provisions that benefit them." So, theoretically, detaching senators' identity from the specific tax initiatives they are proposing could be a way to encourage them to do the right thing. It could, for instance, give them a means of offering much-needed proposals that end various wasteful corporate tax giveaways without having to fear political retribution (nasty television ads, contributions to opponents, etc.) from the corporations that benefit from such giveaways.

But theory is different from reality. And here's the reality: secrecy is more often than not the instrument that helps Washington do things that are bad for the general public and, thus, wildly unpopular - but good for the politically connected.

In the national security realm, for instance, secrecy has fostered stuff like the government's unpopular warrantless surveillance and unpopular mass data mining - stuff that is bad for the average American's civil liberties but good for both government officials who seek monarchical power and for private defense/intelligence contractors seeking to expand their profits.

A similar dynamic plays out with economics. In that policy realm just a few years ago, secrecy famously shielded policymakers from public outcry and resulted in a stealth $16 trillion bailout that handed out huge tranches of taxpayer cash to some of the largest corporations in the world. Now, as Businessweek's Brendan Greeley notes, it's the same dynamic playing out on tax policy (emphasis added):

Sausage is gross, and backroom deals are necessary. But these secrets, the scraps of paper on which Senators write their wishes, vouchsafed in a hope chest at the National Archives, are so precious that they can’t even be trusted to a back room. Senators are scared. Some tax loopholes are just indefensible to voters. There is no way to pretend that they help our kids, or jobs. They just go to people and companies that donate money. That’s what this secrecy is for. The only possible reason for it to exist is to prevent senators from having to defend their choices to the public.

So here’s what we know about Baucus and Hatch’s “blank slate” process, which wipes the tax code clean, forcing senators to justify every loophole they ask to have written back in. We know that some of the loopholes just aren’t defensible, so toxic to voters that not only can we not know them, we may not ever know them...Any senator with a tax plea so secret it has to be physically locked away is definitely, absolutely not requesting it for the voters.

To know Greeley has it right, just consider the career of one of the architects of this scheme, Max Baucus.

The retiring Montana senator is the senior Democrat on the tax-writing Senate Finance Committee. In that position, he hasn't used his power to rid the tax code of corporate-written loopholes, subsidies and handouts - the public record shows that he has used his power to riddle the tax code with those expensive giveaways. In exchange for embedding those handouts in the tax code, Baucus has been rewarded handsomely with campaign cash to the point where he has been famously labeled "K Street's Favorite Senator." That label is particularly appropriate considering a recent dispatch from the New York Times showing that "no other lawmaker on Capitol Hill has such a sizable constellation of former aides working as tax lobbyists."

In light of such a record, the notion that Baucus has built the anonymous submission system in order to help challenge K Street is, in a word, absurd. Having spent so much political capital enriching his corporate donors and lobbyists at the expense of taxpayers, he is retiring with one last gift to those benefactors - a secrecy system designed to let them rewrite the tax code from scratch in a way that most serves their interests.

Of course, senators don't have to allow their tax proposals to be hidden for the next 50 years. They can, for example, follow the lead of Vermont Sen. Bernie Sanders who declined the secrecy offer and voluntarily made his proposals public on his website.

Now that the submission deadline has passed, senators could also move to open up the secrecy system and immediately release all the proposals to the public. Sen. Ron Wyden (D-OR), in fact, seems to be in a perfect position to do that. He has been a vocal proponent of government transparency, generating international headlines demanding an end to the secrecy surrounding the NSA surveillance programs. As a senior member of the Finance Committee - and potentially the panel's next chairman - he is in a perfect position to apply his pro-transparency principles by calling for a disclosure of all the submitted tax proposals.

This or something like it is the only way Americans will know how their new tax code is being constructed, because Congress exempted itself from the Freedom of Information Act and the public therefore cannot compel transparency. Without a group of lawmakers standing up for transparency, we will never get to see the most basic information that should be accessible in a functioning democracy - the information that lets voters know what proposals their elected representatives are putting forward on their behalf. By design, we will also never get to see how campaign donor cash prompts tax policies that deliberately send public money back to the donors.