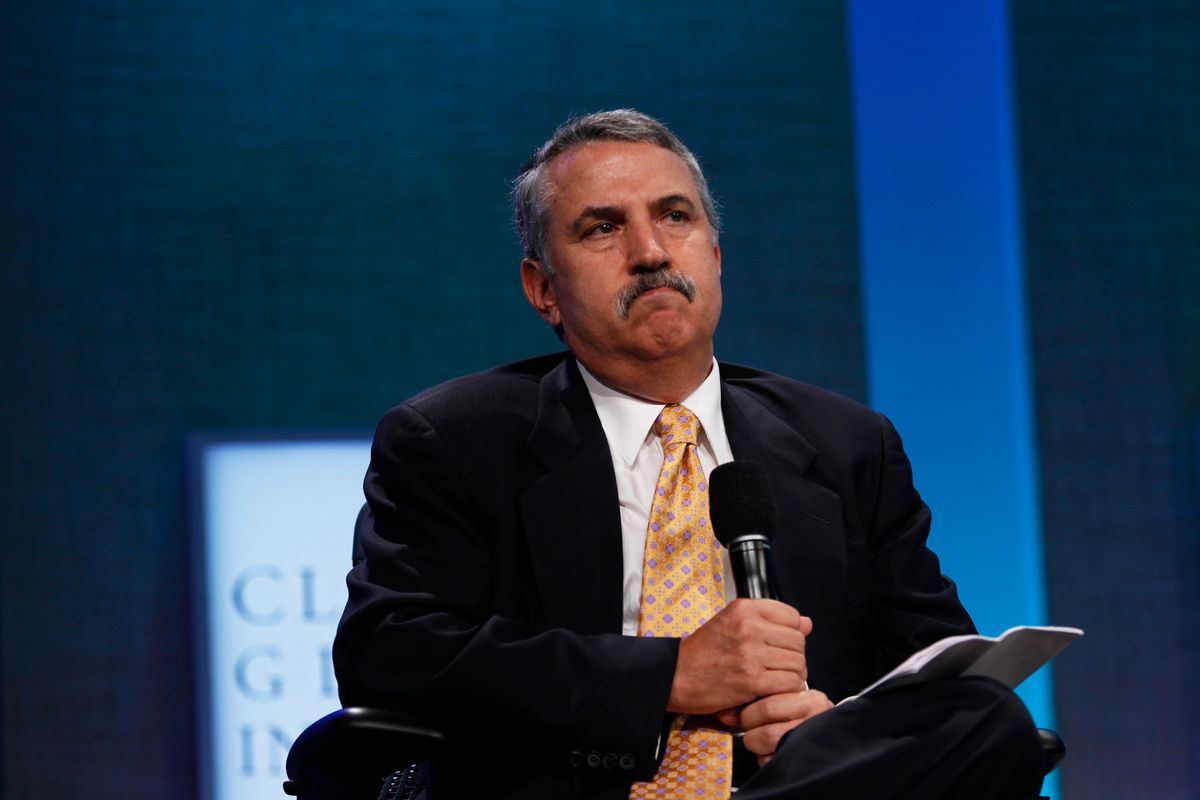 If Thomas Friedman didn't exist, America's high-tech entrepreneurs would have had to invent him.  Come to think of it, maybe they did. The dark science-fiction vision he celebrates serves them well, at pretty much everyone else's expense.

Friedman's vision is worth studying, if only because it reflects the distorted perspective of some very wealthy and influential people. In their world the problems of the many are as easily fixed as a line of code, with no sacrifice required of them or their fellow billionaires.

Ayn Rand with a human face ...

Friedman occupies a unique place in the pundit ecosystem. From his perch at the New York Times, he idealizes the unregulated, winner-take-all economy of the Internet and while overlooking human, real-world concerns. His misplaced faith in a digitized "free" market reflects the solipsistic libertarianism of a technological über-class which stares into the rich diversity of human experience and sees only its own reflection staring back.

Friedman is a closet Ayn Rand in many ways, but he gives Rand's ugly and exploitative philosophy a pseudo-intellectual, liberal-friendly feel-good gloss.  He turns her harsh industrial metal music into melodious easy listening: John Galt meets John Denver. That make him very useful to those who would dismantle the engines of real economic growth, the ones which create jobs while protecting life and limb.

Friedman's column in this weekend's New York Times is, characteristically, a Panglossian panegyric to online technology as the salve for all economic problems. In it he paints the picture of a global dystopia where decent jobs are scarce, educational advancement is unattainable, and people must sacrifice their homes, their possessions, and their personal lives to serve and amuse complete strangers.

He can hardly wait.

The framing device for Friedman's vision is the tale of two twenty-somethings who, like so many Friedman protagonists, built an Internet company. Friedman's column is called "The Sharing Economy," and it celebrates the creators of an online platform called "Airbnb" which lets people rent out their homes to strangers.  Online marketplaces like Airbnb are very interesting economic phenomena. They can be useful and even transformative. But they can also be dangerous, unsafe, and overhyped.

Digital libertarians like Jeff Bezos of Amazon see these digital marketplaces as the electronic realization of a free market fantasy. They promote platforms like Bezos' "Mechanical Turk" system of online job sharing, unconcerned about their ability to accelerate the destruction of decent wages and secure jobs. (They're also blissfully unaware of the embarrassing contradiction between their own libertarianism and the fortunes they've earned from government-created technologies like the Internet.)

Friedman seems to share a Bezos-like vision of unregulated marketplaces for every aspect of  human activity. He waxes ecstatic about Airbnb, which he sees as both a practical solution and a broader model for a future economy. Friedman thinks that renting out your private space, your personal time, and your possessions will soon become the only way to make ends meet - that is, unless you possess extraordinary skills, which could land you a mediocre job at best.

And he thinks that's just fine.

Consider this passage from Friedman's column:

"In a world where, as I've argued, average is over -- the skills required for any good job keep rising -- a lot of people who might not be able to acquire those skills can still earn a good living now by building their own branded reputations, whether it is to rent their kids' rooms, their cars or their power tools."

This paragraph reads like a Zen koan pieced together from cast-away fragments of motivational sales speeches. We're left to infer the meaning of its more obscure phrases from their context, the same way World War II codebreakers cracked particularly difficult passages in enemy telexes. So let's try to tease out its meaning, phrase by phrase:

"In a world where, as I've argued, average is over ..." (Emphasis from the original.)

"Average is over"?  Averaging is a mathematical function, inextricably woven into the fabric of reality as we understand it. How can it be over? It's like saying that subtraction is over, or means and medians are null and void.  (Watch yourself, standard deviation. Thomas Friedman has his eye on you.)

What's he really saying here? The "as I've argued" offers one clue to motivation, if not meaning: Anything self-referential from this author - and that's a lot - is a signal that he's floating another potential "The World Is Flat" book title.

But what's he saying?  Our context-driven codebreaking takes us to the next phrase:

Ah, I see. "Average is over" is connected to job skills. Friedman apparently means that you can't get a good job anymore if your skill level is only average.

Why didn't he just say so?

What are the implications of a world in which you must be above average to get "any good job"?  When Garrison Keillor described Lake Woebegon as a place where "all the children are above average," it was a joke. But Friedman's not joking. He's describing a world in which ordinary people are excluded from decent employment - and he's doing it without expressing regret or demanding change.

To be fair, Friedman is an advocate for education - in his own way. But his education arguments, like his economic ones, focus on the online, the gimmicky, and the jargon-laden.  Friedman's world doesn't seem to include manufacturing jobs, or construction jobs, or good government jobs. He envisions a workforce made up almost exclusively of "lateral thinkers" and "integration" engineers. Students should be trained to "invent" their jobs, says Friedman, who claims that self-invented work will be the best source of future employment.

Based on the number of people currently seeking full-time employment in the US alone, 15 or 20 million people need to "invent" their jobs pretty quickly. That's a lot of Internet start-ups, along with a whole boatload of "lateral thinking."

Friedman's unrealistic view of the labor force, shared by many tech entrepreneurs, is one in which the middle class is as passé as a Commodore 64.  How can formerly middle-class Americans survive in the world they envision?

According to Thomas Friedman, tens of millions of un- and under-employed Americans can "earn a good living online by building their own branded reputations." (That's right: He went there. He said "branded reputation.") Using websites like Airbnb, Friedman suggests, they can rent out "their kids' rooms, their cars or their power tools."

Friedman seems unaware that millions of Americans don't have kids' rooms. (Lots of people don't have cars or power tools, either.) He might be astonished to learn that even in New York City, where he is professionally based, nearly half the population is considered either "poor" or "near poor." Those who live in ghettoes or other concentrations of minority poverty don't seem to exist for him.

"Three people stayed with us," said co-founder Brian Chesky, "and we charged them $80 a night. We also made breakfast for them and became their local guides."

San Francisco's one of the most desirable tourist destinations in the country. It doesn't seem to have occurred to Friedman that not everybody lives in such a desirable location - or that some of us would rather not give up a large chunk of our personal space to strangers while serving as their personal cooks and chauffeurs. What's next? Hiring ourselves out to millionaires as "faithful family retainers," antebellum-style ?

As I read this column my mind kept wandering to the recent Bill Moyers program about Milwaukee, "Two American Families," and to a recent visit to my equally hard-hit home town of Utica, New York. Trust us, Mr. Friedman: There won't be a lot of "Airbnb" tourists looking to rent beds or cars in Milwaukee or Utica.

Friedman seems blithely unaware of the role of regulation in keeping us safe. Do we really want to rent cars from strangers without knowing whether they've been properly maintained? A "branded reputation" is fine until the brakes give out on a steep incline. And power tools?  One broken chain-saw blade and you could wind up looking like a bit player in a Tobe Hooper movie.

But safety, important as it is, barely scratches the surface of the problem.  Friedman's overall vision, his conception of a "new economy," is what's truly terrifying.

Any rational person who has glimpsed Friedman's dystopian future - which he has pretty accurately envisioned, based on current trends - would urgently begin seeking out alternatives and solutions. They'd want to prevent our economy from becoming an electronic marketplace where the needy and desperate peddle their time, space and possessions to the well-to-do in a desperate bid for survival.

They certainly wouldn't celebrate this sci-fi dystopia, as Friedman does.

There are alternatives we can pursue collectively: An aggressive government program of job creation. A return to the days of social mobility. An end to the gross concentration of wealth in the hands of a few. And, above all, affordable education for all so that we can restore the American dream of self-advancement.

Instead Friedman glorifies globalization and the destruction of good jobs. He's indifferent to the loss of social mobility and infatuated with mediocre or at best mildly clever web enterprises. Friedman is the praise singer of Palo Alto, the griot of Los Gatos, and he's never met a Internet billionaire he didn't like.

Thomas Friedman is the perfect mirror for the undeserved self-infatuation which has infected our corporate, media, and political class. He's the chief fabulist of the detached elite, the unfettered Id of the global aristocracy, the Horatio Alger of self-deluded, self-serving, self-promoting techno-hucksterism.

But give the man his due: When it comes to "building your brand reputation," Friedman's a master of the art. It helps to have the perfect platform, of course. As soon as the New YorkTimes is ready to hire 20 million more columnists, our employment problems will be over.