Filner – not Weiner – is the real Democratic sex scandal

When media outlets conflate the two scandals, they ignore the issue of consent and do women a disservice 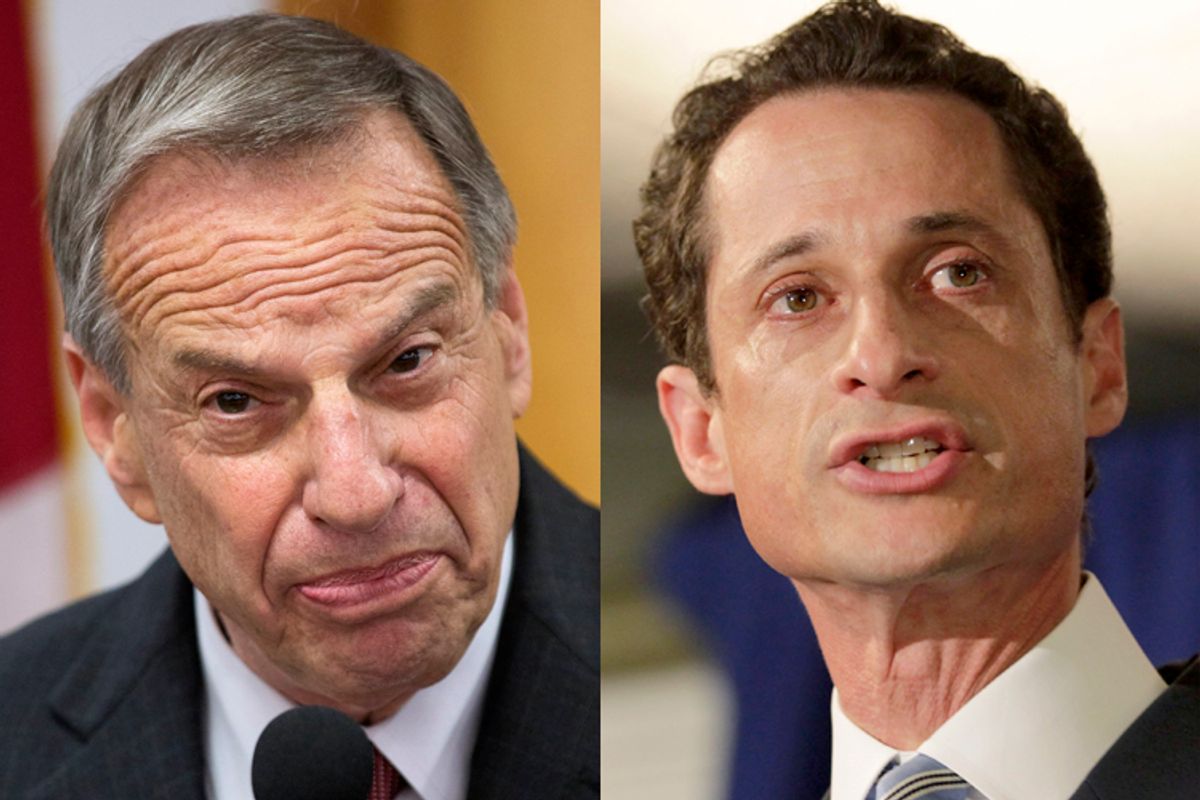 Perhaps the most troubling aspect of the new sex scandals involving Democratic politicians is the way the media and politicians are conflating very different types of behavior. If you didn’t know their back stories, you would think that San Diego Democratic Mayor Bob Filner and New York City Democratic mayoral candidate Anthony Weiner were guilty of the same, equally reprehensible thing. Rachel Maddow, for instance, grouped together Filner and Weiner, saying they “recalibrate for us as a nation the depths of shame that we are supposed to accept from people who are in positions of public leadership.” During a press conference last Thursday, Nancy Pelosi was asked about her “take on former congressman Weiner's latest transgressions, having repeated the same action that occurred for his resignation in Congress.” Though asked only about Weiner, Pelosi replied by linking Weiner to Filner: "I think I have spoken and acted in terms of Anthony Weiner, in terms of when he was in the Congress of the United States. In his case, in the case of Mayor Filner, clearly, they have both admitted they need therapy. I think maybe that therapy could better be accomplished in private ... the conduct of some of these people that we are talking about here is reprehensible. It is so disrespectful of women." And in an article titled "Are Anthony Weiner and Bob Filner and Their Ilk Politically Redeemable?” the Los Angeles News Group explicitly equates the behavior of the two men, calling them "Politicos Behaving Badly" and “Old Boys Gone Wild.”

Yes, Bob Filner and Anthony Weiner both may have done something sexually creepy. And, yes, Weiner's actions can be seen as immoral in their disrespect for his wife and the public, both of whom he told he had stopped his sextual behavior. But Weiner's actions appear largely to have involved consenting adults. (It's worth noting that one of the women Weiner sent a crotch shot to says the photo was unsolicited, but this case hasn't been the focus of the media firestorm, at least in mainstream outlets.) Filner allegedly made advances on unwilling women -- forcibly kissing them, shoving his tongue down their throats, licking their cheeks, putting women in headlocks so he could kiss them, touching a woman's buttocks, putting his hand down a woman's bra, telling a woman who worked for him to come to work "without panties on,” and more. He is accused of violating their bodies and autonomy. To hear them tell it, he didn’t care that he made them feel "fearful," and "violated."

The Republicans have conflated their own anti-woman policies with individual actions against women, by presenting the allegations against Filner and Weiner as part of the War on Women. But the mainstream and even progressive press's response is perhaps equally dangerous. For it overlooks the critical matter of consent.

We’ve seen a similar problem in the coverage of military “sex scandals." Some media outlets failed to distinguish between consensual relationships that violate military policy, and sexual assault and rape, which violate people. All behavior related to sex was thrown into the same general sex-ish bucket. In all fairness, this major disservice to rape and sexual assault victims is also reflected in the military’s alleged practice of prosecuting rape as adultery. Former Marine Intelligence officer Matt Collins writes that, “One troubling tack commanders have taken is to pursue adultery charges in rape cases. For the victims, this means that their attackers will get off on a misdemeanor conviction and do not have to register as sex offenders ... Rape victims are denied the satisfaction of the military acknowledging the crime and properly punishing the attacker." The Air Force’s top commander, Gen. Mark A. Welsh III, attributed the military's sexual assault epidemic to a “hookup mentality.” Twenty percent of women report they had been sexually assaulted, he said, “before they came into the military ... So they come in from a society where this occurs ... Some of it is the hookup mentality of junior high even and high school students now, which my children can tell you about from watching their friends and being frustrated by it.” So rape is just an extension of hooking up too much. Got it.

What we're seeing in the conflation of Filner and Weiner's behavior is an extension of rape culture, which normalizes the violation of women (and sometimes men) by attributing it to boys being boys. But even if the media doesn’t always recognize the substantive difference between Weiner's actions and the allegations against Filner, the law does. Though sexual harassment per se isn't criminal, several of the things Filner is accused of could be defined as sexual assault, which is a crime. And sexual harassment can result in lawsuits -- indeed, the city of San Diego is now suing its mayor. As City Attorney Jan Goldsmith explains, “If Bob Filner engaged in unlawful conduct and the city is held liable, he will have to reimburse us every penny the city pays and its attorney fees." What Weiner did, though reprehensible to some people, was not illegal. You might not want to date or marry or be married to someone like Weiner, but that doesn't make what he did against the law. (Yes, adultery is technically illegal in some states, including New York, but this relic of a law is hardly ever enforced, unlike sexual harassment cases.  And it's a stretch to call what Weiner did adultery.)

Part of the problem with the media and political response, even on the left, stems from the influence of the religious right. Their censorious attitude toward sex and sexuality makes it hard to talk about sex at all, let alone about the important differences among different kinds of sexual behaviors. Their moralism fails to recognize the importance of consent. These forces are a lot to take on. But the very least we can do when we talk or write about Weiner or Filner, sexting or sexual harassment, is avoid the easy, sloppy and irresponsible framing that fails to take the importance of consent into account.