Updated: Million-dollar speaker Cory Booker has not yet decided when you should be allowed to retire 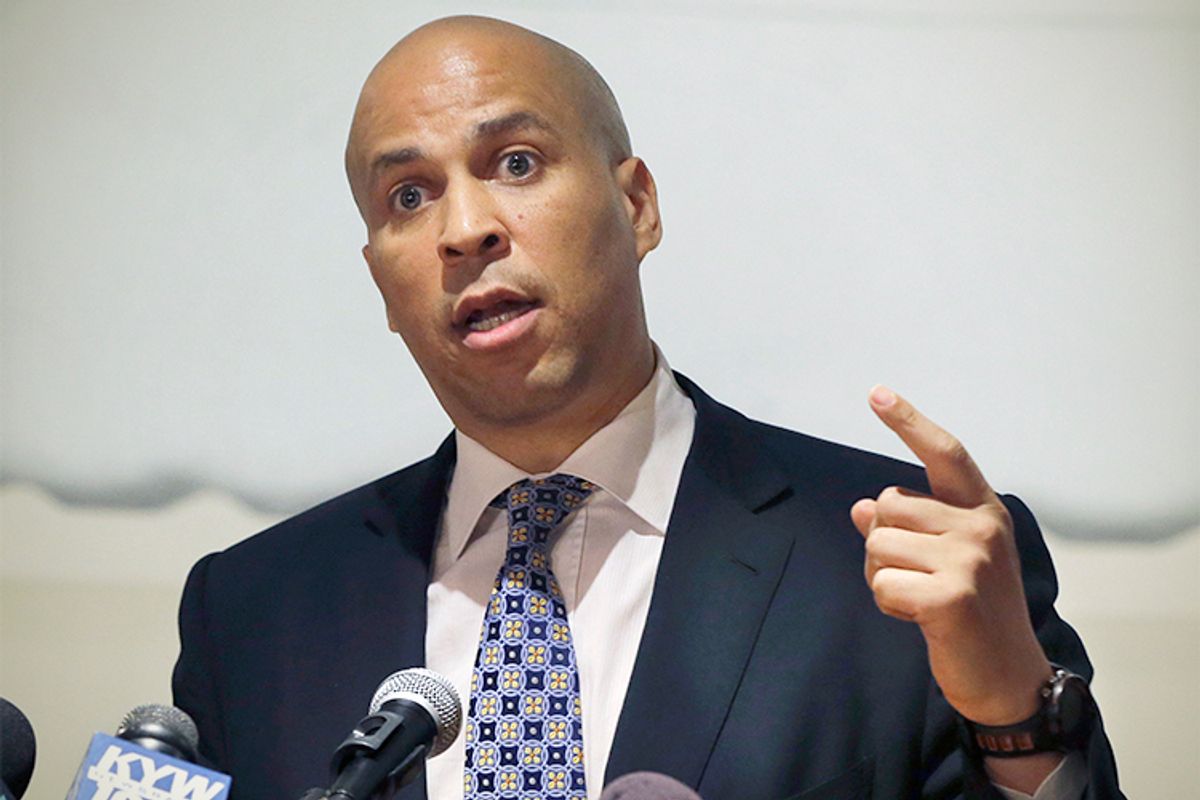 Twitter superhero and Newark Mayor Cory Booker was supposed to give a speech at the University of Iowa this month, but it has been canceled, because Booker is currently campaigning for a U.S. Senate seat. The scheduling was a bit strange -- the speech seemed to have been booked after Booker announced his candidacy -- but it is now called off, which means Booker will not be receiving the $30,000 the school was contractually obligated to pay him in exchange for his nice words.

Yes, $30,000, for one speech, given to a public university. That is by no means an unusual amount of money for a Booker speech. Over the last five years, while he's been mayor, Booker has earned $1.3 million for his nice words and inspiring presence. He has donated half of that money to charity, but that still leaves him with a respectable six-figure income.

This is only natural. Booker, by the standards of his educational background and social sphere, is quite poor. Most of Booker's friends are very rich -- you don't go to Stanford and Yale and make poor friends -- but Booker has spent most of his career in city politics, unlike pols like Chris Christie and Michael Bloomberg, who made sure they were rich before they ran for office. So speaking fees are really Booker's best bet for making something close to what he would draw in the private sector, and, for some insane reason, organizations across the nation are not just willing but thrilled to pay famous people the equivalent of a year's worth of blue-collar wages to repeat inspirational platitudes about leadership for an hour. It's insane, but it's just the way it is. If someone offered me $30,000 for one day's worth of fairly light work, I would not refuse it. (Call me, universities, corporations and interest groups!)

But I want you to keep those numbers in mind when you read this paragraph from a newspaper editorial board interview with Booker:

For Social Security, Booker said he opposes raising the retirement age for most people in the country – except, perhaps, for people in their 20s or younger – because the country made promises to them.

That is quite vague. I think it is intentionally vague. One strange thing about Cory Booker is that his beliefs on Social Security and Medicare seem to be secret. This is, as best I can tell, the first time he's ever even hinted at what he thinks about proposals to "reform" the programs (by cutting them). Newark Assembly Speaker Sheila Oliver, who is challenging Booker in the U.S. Senate primary, has asked him point blank whether he'd oppose cuts to the programs, and he has not answered.

It is one thing for a big city mayor to not have an opinion about the federal budget, but as a U.S. senator Booker may end up being a crucial vote for or against a proposal to raise the eligibility age or reduce benefits. If he has formed opinions about proposals along those lines, voters probably ought to hear about those opinions.

But one could make some semi-informed guesses about those opinions, based on this statement and Booker's various financial and social ties. Booker has always enjoyed a great deal of support, financial and otherwise, from the finance community. This is why he offered that unfortunate but strident endorsement of the business of private equity in the midst of the 2012 presidential campaign. The people of hedge funds, venture capital and private equity are his people. (In this Booker is not hugely different from lots of other Northeastern Democrats.) These people tend to share an ideology that is often called "centrist" or "fiscally conservative and socially liberal," but it is really just neoliberalism: a belief in deregulation, privatization and low taxation. These beliefs are self-serving, for rich people, and they have also made America a very unequal and unnecessarily impoverished country. But among the American elite there is still broad consensus that this political philosophy is not just correct but also popular. (Hence referring to it as "centrism," as if these people occupied the exact midpoint of American politics.) Booker has palled around with "No Labels," a "centrist" nonprofit funded and run by rich neoliberals who are convinced that their ideas would be hugely popular if only they were marketed correctly.

One thing the rich neoliberals care very much about is the federal deficit, and nearly all of them believe that the best way to address the federal deficit is by cutting Medicare and Social Security. This is a terribly unpopular idea everywhere in America besides parts of Washington, D.C., and Manhattan, but those parts of Washington, D.C., and Manhattan have most of the journalists and rich people whose opinions actually count in our national politics.

We don't know if Booker agrees with his friends and donors. But we do know, now, that when it comes to Social Security, Booker believes it is sacrosanct -- for currently old people. For the young, he seems to feel that they could live with some cuts. This is a popular belief among people over 40 with healthy incomes. Today's kids will have to learn to live more frugally, because of ... responsibility, or something, and because we are Running Out of Money.

Here is the thing about people in their 20s: There's really no way many of them are ever going to be able to retire. The unemployment rate for Americans 20 to 24 years old is currently 13.5 percent, effectively unchanged from a year ago. The unemployment rate for people 16-19 years old is 24 percent. Those numbers don't take into account young people not working because they are in school or young people not working because they gave up looking for work. A quarter of all Americans 25 to 34 don't have jobs, period.

The official numbers also don't take into account the underemployed. A year ago, Gallup claimed that a third of Americans 18-29 years old are employed part-time but looking for full-time work. "Young adults were more than twice as likely as those in older age groups to be underemployed," according to Gallup's survey. And the young people not in the labor force because they are in college are often taking on tremendous amounts of student loan debt. The longer you remain jobless in this economy, the harder it is to eventually actually find work. There is absolutely no sign of a decent job market for today's young people.

Meanwhile, 401Ks, the investment devices that almost totally supplanted traditional pensions for Americans of the last two generations, are a disaster. Many young people entering the workforce with college degrees and student loan debt -- the high-achieving young people most likely to earn good salaries, in other words -- will be forced to delay saving for retirement for years while they pay down that debt. It seems very likely that a few decades from now Social Security will constitute the vast majority of the retirement income of currently young people working part-time or not at all. To propose to cut those benefits now, for the sake of imaginary numbers on 40-year budget projections, is madness.

The only sensible "reform" for Social Security, as Duncan Black has repeatedly argued, is expansion, not cuts. Because most of today's young people are not going to earn millions of dollars on the speaking circuit.

Cory Booker apparently agrees with me.

No. None & if anything expand Social Security RT @JasenComstock: Do u support cuts to social security or Medicare?

That's good! We're on the same page. Though this doesn't square with what he told the Bergen Record, or at least it doesn't seem to square with its characterization of his comments. Regardless, it is nice to have him on the record, now, on Social Security.

Booker confirmed his position in a few more Twitter responses, including one to Adam Green, cofounder of the Progressive Change Campaign Committee. The PCCC held an event today calling on Booker and his fellow Senate candidates to endorse Social Security expansion. Booker confirmed that he considers both raising the retirement age and "chained CPI" cuts, and he opposes both proposals.