Pick of the week: Lindsay Lohan in "The Canyons"

Pick of the week: No, I'm not kidding. Paul Schrader's "The Canyons" is flawed and cold, but Lohan's amazing 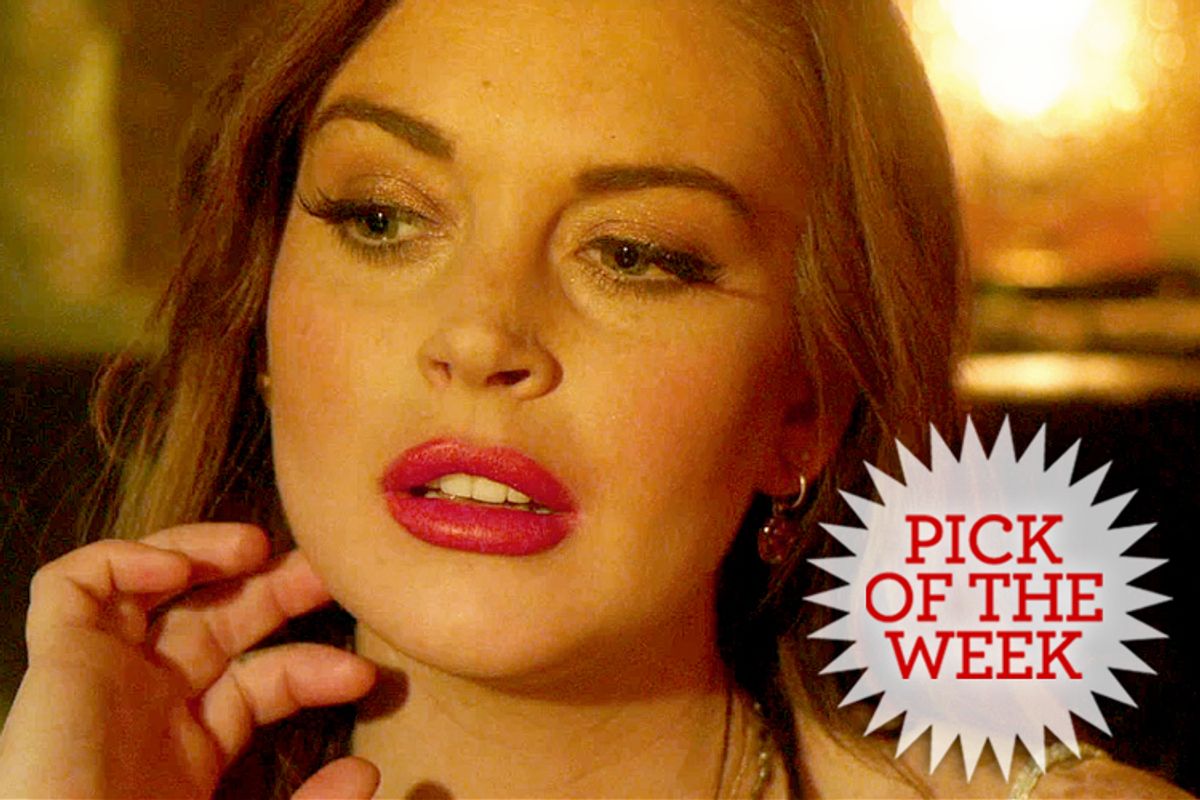 Paul Schrader’s no-budget L.A. nihilist odyssey “The Canyons” begins and ends with bleak but gorgeous washed-out images of shuttered and decrepit movie theaters, most of them in suburban malls that were probably booming two decades ago, or even one. Schrader also uses these images, which have no direct connection to the movie’s story, as chapter headings or interstitials, breaking the narrative into separate days. It took me a while to grasp the symbolic connection Schrader is making, which is that “The Canyons” is meant as “post-theatrical cinema,” a movie made after the age of movies.

There’s another parallel that may go even deeper, one that Schrader – a revered movie veteran who scripted “Taxi Driver” and directed “Blue Collar,” “Patty Hearst” and “Mishima,” among many other films -- may not have noticed. Those empty palaces of imitation glamour are analogous to the people in “The Canyons,” and especially to Lindsay Lohan, who gives an extraordinary performance that may not exactly be acting, or that blurs the imprecise boundaries between acting, psychotherapy and autobiography. Like the abandoned theaters, Lohan is a relic of the recent past, both noble and pathetic, a leftover fragment of a boom that abruptly went south. Her character, Tara, isn’t meant to be famous – she has no job or career beyond being the live-in girlfriend of a rich degenerate – but she represents, as Lohan does, the eternal archetype of a beautiful young woman chewed up by Hollywood. She’s made too many bad decisions with too many bad people; there've been too many drugs, too much booze, too much sex with random strangers at 5 o’clock in the morning.

Lohan is now 27 years old, around the same vintage as a lot of those suburban movie palaces. That’s young by any reasonable human standard, but as Schrader delicately put it in a Q&A session after the screening I attended in Manhattan, “Lindsay is out of her ingénue period.” With her whiskey-and-cigarettes voice and overdone eye makeup – the cast provided their own wardrobe, makeup and transportation in this Kickstarter-funded production – Lohan’s Tara is one of those hard-shelled tough broads out of a late ‘60s or early ‘70s film, with a vulnerable streak she’s trying to repress. (Schrader has variously suggested Ann-Margret, Angie Dickinson and Gena Rowlands as points of comparison; whether audiences of the “post-theatrical age” have ever heard of them is another matter.)

It was brave of Lohan to expose herself the way she does in “The Canyons,” and I’m not talking about the nudity, which is no big deal. I suppose when you’ve been vilified and tabloid-moralized as much as she has, a little more doesn’t matter. Schrader has made it clear that she was a major pain in the ass to work with, often showing up late or not showing up at all. (She’s reportedly been in and out of rehab at least once since finishing the picture.) But he also said he’d work with Lohan again in a heartbeat, and that she still has a long career ahead of her if she can shake her reputation. Anyway, he added, a director can shoot around bad behavior, but not around a lack of charisma – and whether you view what she does in this movie as great acting or a public meltdown, it’s riveting.

Before Lohan took it over and turned into her own personal non-comeback story (arguably to the movie’s betterment), “The Canyons” was a no-budget, sexy-time experiment for Schrader and writer Bret Easton Ellis, funded with about $70,000 of their own money and another $160,000 or so they raised on Kickstarter. All the locations had to be free, and all the actors, including Lohan, male porn star James Deen (making his legit acting debut) and “Glee” cast member Nolan Funk, worked for minimal pay or none at all, with promises of back-end participation. If the film’s plot is largely standard-issue Ellis – white, moneyed Los Angeles as a vapid moral wasteland, full of “beautiful people doing bad things in nice rooms,” as Schrader puts it – the director’s combination of formal discipline and search for human connection pushes it beyond those limits.

This is a movie about people who make movies, or at least claim to, but who barely seem interested in them, except as a means to an end or as lifestyle accessories. In one perhaps overloaded scene, Tara asks her supposed friend Gina (Amanda Brooks) when she last went to the movies. Gina starts to talk about going to a glitzy premiere of something with her boyfriend and Tara interrupts: Stupid celebrity parties with instantly forgettable films attached don’t count. She means going to the movies because you want to see a movie. Gina and Tara actually met while working together on a hypothetical horror movie funded by Christian (Deen), Tara’s immensely bored trust-fund boyfriend. It’s hard to evaluate Deen’s acting ability after this one role (and innumerable adult videos), but he’s a brooding, compelling presence as a hyper-controlling, compulsive wiseass who’s sliding toward psychopath territory.

For Christian, the movie is a way to keep his dad off his back so he can pursue his real passion – making increasingly baroque cellphone porn videos starring Tara and random people recruited off the Internet. For Gina, the one somewhat genuine and sincere person in this toxic web, the movie offers a chance to get her feckless boyfriend Ryan (Funk) the acting break that might rescue him from his day jobs as a hotel concierge and underwear model. Ryan may be doing other work Gina doesn’t know about – and she definitely doesn’t know that Ryan and Tara are ex-lovers who’ve reconnected hot and heavy after the movie brought them together again. Christian likes to front as a sexually liberated guy, but as he tells his shrink (a cameo for filmmaker Gus Van Sant), he always needs to be in control. He can feel Tara trying to wriggle free from his control, and he means to stop her.

If that sounds like a rehash of every Ellis movie-novel project (especially “American Psycho” and “Less Than Zero”), mixed with a few dashes of “Melrose Place,” you’re in the ballpark. But every movie, of the “post-theatrical age” or not, is primarily a question of execution. Schrader and cinematographer John DeFazio, shooting with VOD release on the small screen in mind, notice character quirks and capture the ambience of iconic L.A. locations in ways other filmmakers might miss. As a visual symphony, “The Canyons” is often masterful, and while it may be pornographic in places, it’s never campy. At the center of its cold, beautiful and half-dead world is the almost incandescent Lindsay Lohan, burning like a flawed diamond.