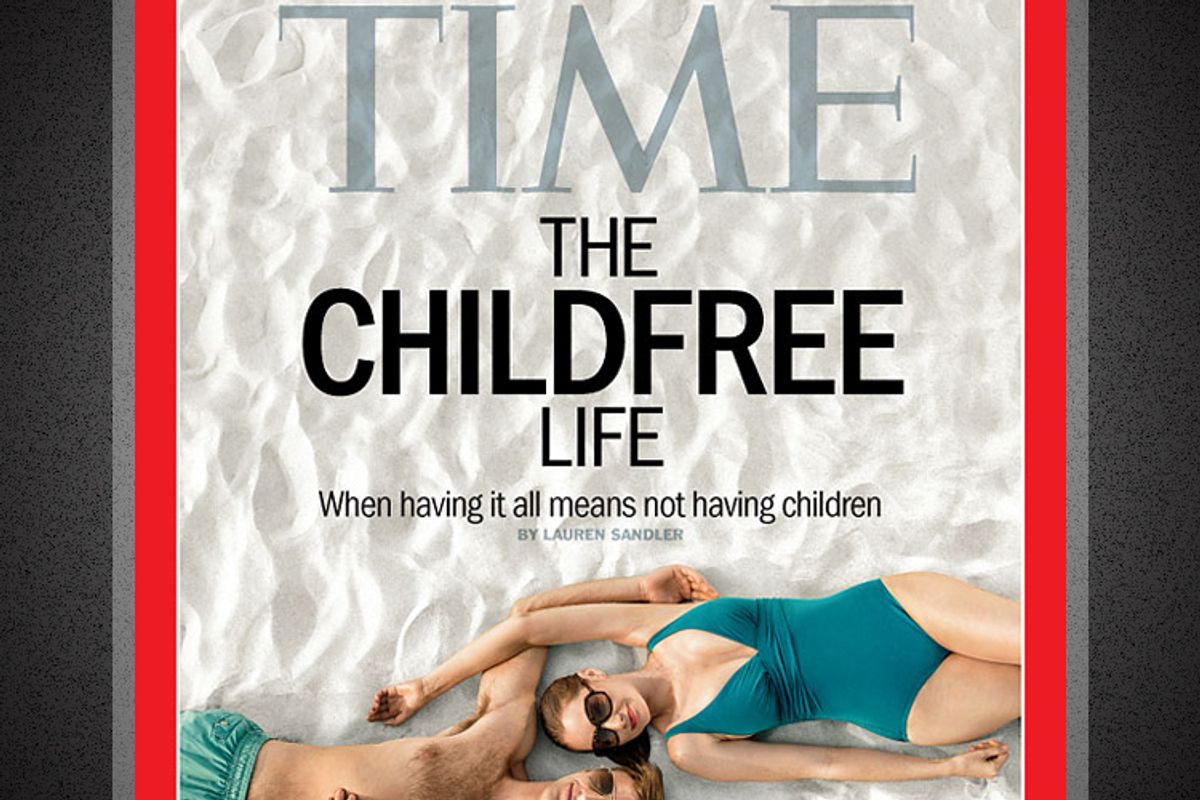 Living in a culture that fetishizes parenthood – and more specifically motherhood – to the extent that ours does, at a point in history when bump-watching is a full-time media job, you might not guess the quiet truth. But here it is: Fewer of us are procreating than ever before. Between 2007 and 2011, the U.S. birthrate dropped by almost 10 percent. But a provocative new Time cover magazine story reveals our new, less kid-centric ways -- and seeks to redefine "having it all" as not having children.

Author Lauren Sandler, who recently made the case for being – and having – an only child, this time goes one step further, revealing the joy of none, despite the perpetual pressure to reproduce. The magazine's cover image sure makes it look good -- a blissful man and woman lounge together on the sand, not a sippy cup or errant Lego in sight.

As Sandler notes, despite a seismic shift in our patterns – one in five American women will now never have children – we still live in a land "that often equates womanhood with motherhood," one in which "the baby product industry is at a record high." And, she explains, with an unprecedented range of technologies and opportunities now available to women who might otherwise have been tactfully excused from motherhood – older women, lesbians, women with fertility issues – the "oppressive … ambient roar" about having kids can be unceasing. It's a roar that's come at certain moments from Time itself, the magazine that just last year defiantly, attention-gettingly asked if you're "mom enough."

Where Sandler gets it right is in her cheery willingness to burst the balloon of people without kids as sad spectators in the glorious circle of life. She talks to a professional woman with no interest in the "glamorous martyrdom" of motherhood and a 50-year-old who happily declares, "I don't give a s--- what anyone thinks." And the Time issue expansively offers perspectives from other writers too, including Beth Lapides, who describes her contented relationship with "the man I didn’t have children with" and a life that has been "one big no and a million little yeses." There's Carolina A. Miranda, explaining an idea that at this point in history "should not seem that radical" -- that being childfree is not tantamount to being "selfish" or "slavishly self-involved." And researcher Sonja Lyubomirsky explains that while "94% of parents say that it is worth it," parental satisfaction or lack thereof is an incredibly variable condition, based on a large number of mitigating factors. Essentially, you can have a happy life with or without kids, but kids themselves won't make you happy.

Despite the increasing numbers of Americans opting out of having kids, parenting is still largely taken as the default path of adulthood, and those who go down a different road are still often regarded with skepticism and disdain. So it's better than great that a mainstream, doctor's-waiting-room magazine like Time has devoted such considerable space to destigmatizing the childfree. It's too bad, though, that for a cover story that features the image of a man and a woman, the topic of whether or not to be childfree is still presented in terms relating almost exclusively to women. Carolina A. Miranda even notes that the questions of potential regret "are generally directed at me — not at my husband," but there's only one story in the whole package written by a man. And that one, by the way, is a feature by sociology professor Philip N. Cohen explaining, with lots of crisp facts and figures, why the shrinking birthrate is no reason for end-of-the-species panic. Where, in Lauren Sandler's examination of the "maternal instinct," is a question about the paternal one? Where, in any of it, is the thoughtful, reasoned voice of a guy who just doesn't want to be on the daddy track?

The fantasy of motherhood as the BEST AND MOST IMPORTANT job in the world sells a lot of diapers and fuels a lot of mommy blogs. Meanwhile, the most that men who don't have kids usually get is the occasional grudge piece about George Clooney. But in the interest of making a more peaceful, less sanctimonious world for all of us, wouldn't it be nice if Time had done more to acknowledge that reproductive choice means choice for men too? It's not as if it's just so difficult to find adult men out there who've decided fatherhood isn't for them. (Just swing a cat in Manhattan, for starters.) And wouldn't it be grand if Time remembered that having children – or not having them -- isn't something that only happens to women?