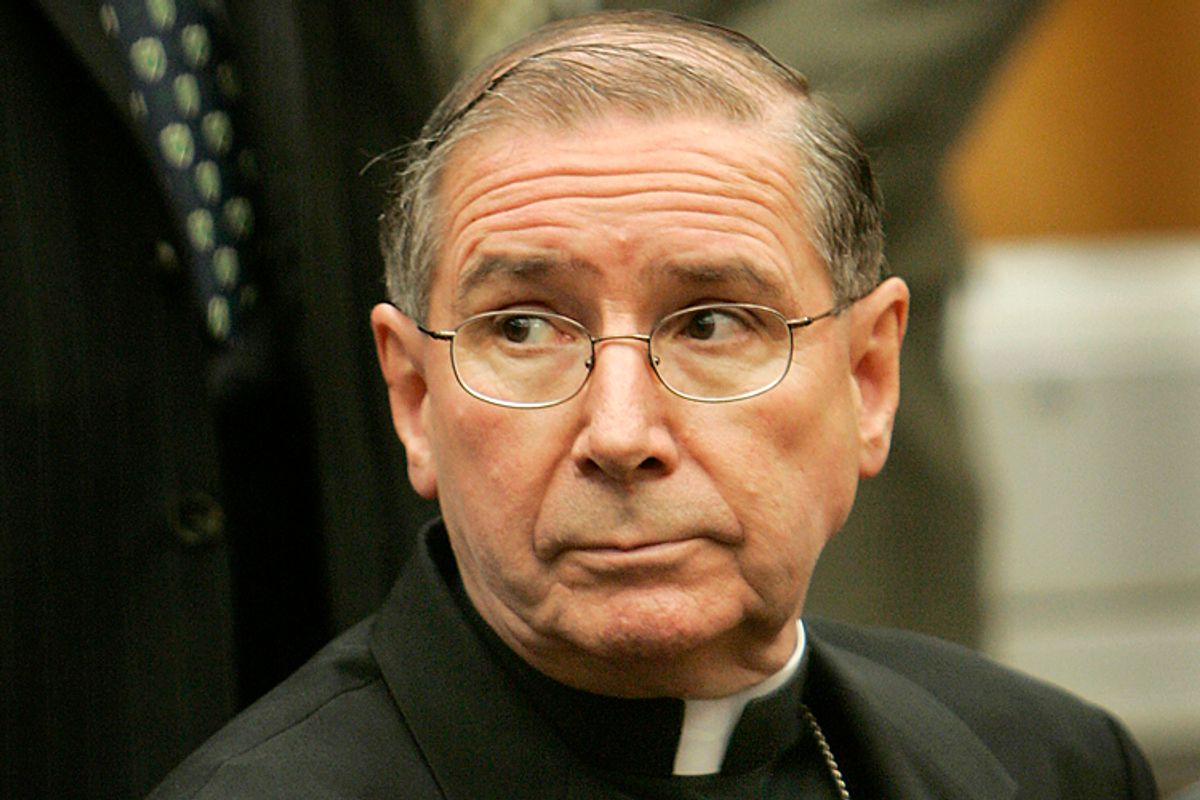 The seemingly limitless book of sexual abuse by Catholic clergy – and its coverup by a doggedly self-preserving church administration – added yet another new chapter this week. Just one month after Milwaukee released a mind-boggling 6,000 pages of documents revealing the personnel files of over 40 priests with "verified abuse claims against them" and the clever maneuvers the church went through to protect millions of dollars in its funds from lawsuits, on Wednesday five Los Angeles religious orders released 1,700 pages of documents pertaining to "a dozen priests, brothers and nuns accused of sexual misconduct."

The move is not the first stark revelation of the massive abuses within the L.A. diocese. In January, the Los Angeles Times published a disturbing set of internal church documents – documents that "the Archdiocese fought for [five] years to keep secret" -- detailing how Archbishop Roger M. Mahony and Msgr. Thomas J. Curry worked together to conceal abusers' "past problems" from law enforcement. These new papers, released to sexual abuse survivors as part of "the first wave of a court-ordered public disclosure" in a $660 million settlement, are not quite as earth-shattering. Instead, they offer "little or no reference to abuse allegations" save for cryptic references to, for example, one priest's "problem" and "difficulty." They also shed no new light on the sex abuse charges toward two nuns named in the subsequent lawsuits.

The papers do, however, reveal 500 pages of documentation regarding Ruben Martinez, who in 2005 confessed that he had molested "as many as one hundred boys." There's a note from Father Paul Nourie about Martinez's "alleged misbehavior with younger males," and his assertion that he has "every reason to believe their veracity." The note appears to have been written "shortly before he assign[ed] Martinez to another parish in the Imperial Valley ... to work with children."

Earlier this year, Cardinal Roger Mahony was stripped of his public and administrative duties, though he still participated in the papal enclave in March. For his part, Mahony has testily explained that when, during his tenure, "a small number of cases did arise ... I sought advice from several other Bishops across the country, including Cardinal John O’Connor of New York, Cardinal Joseph Bernardin of Chicago, and then Bishop Adam Maida of Green Bay." (Apparently calling the cops never crossed his mind.) And, he has said, "I have stated time and time again that I made mistakes, especially in the mid-1980s. I apologized for those mistakes, and committed myself to make certain that the Archdiocese was safe for everyone." He's apologized for them – but time will tell if he's yet fully revealed them. As the L.A. Times reports, "An additional 45 religious orders will release the personnel files of their accused clergy by this fall."