You can't be a Christian and a Democrat at the same time, Virginia's GOP candidate for lieutenant governor says 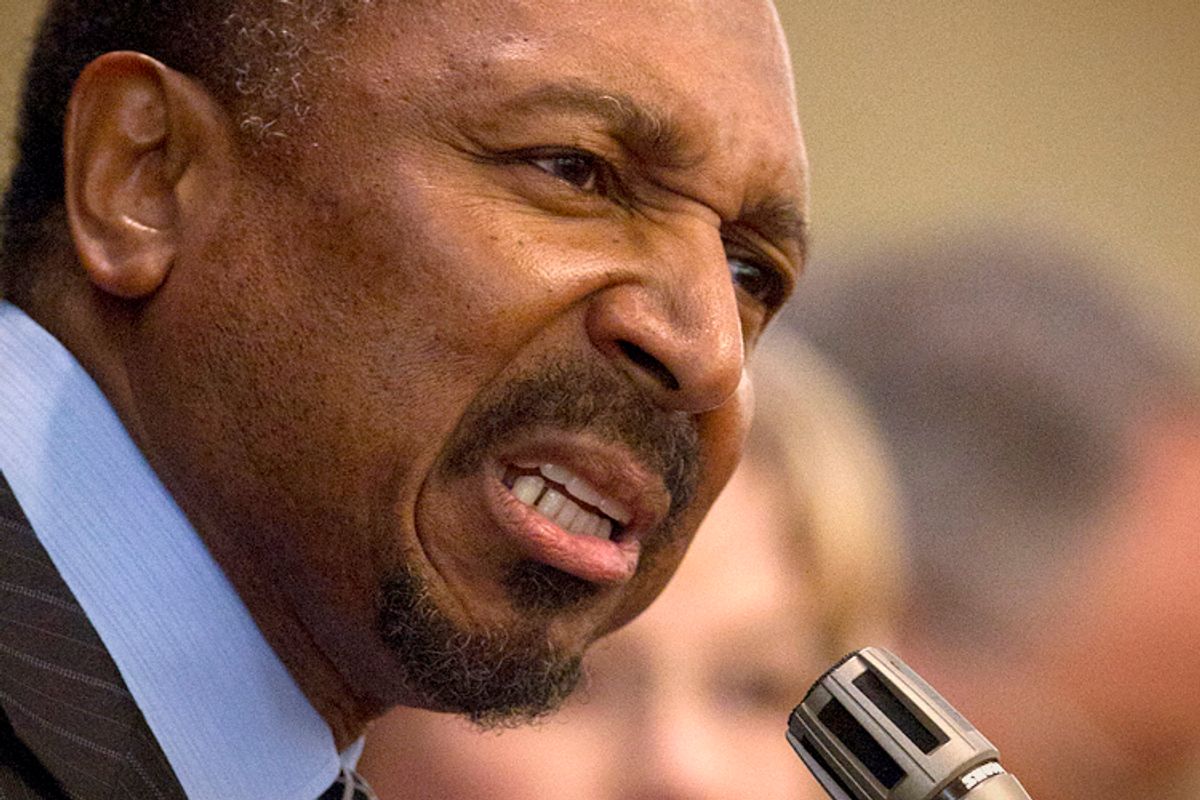 In a local radio interview this morning, Virginia Republican lieutenant governor nominee E.W. Jackson said the Democratic Party is "anti-God" and that Christians should leave it.

Jackson has said in the past that he thinks believing in God and voting Democratic are fundamentally incompatible, so WLEE host Jack Gravely asked if he still believes it. Gravely explained that he's a Christian and tends to vote Democratic, just like his parents and family. Jackson didn't back down.

"You are saying for us, we’re all wrong, leave that party. And all I’m saying to you is, if you said it before, you still have to believe it, why did you say it?" Gravely asked. "Oh, oh, oh I do believe it," Jackson responded.

Listen to the interview here.

Jackson, a bishop and outspoken social conservative, has run intro trouble for his stridently anti-gay and antiquated social views in the past. Even his running mate, the state's GOP gubernatorial nominee, Ken Cuccinelli, who is no San Francisco liberal himself, has distanced his campaign from Jackson's.

While Republicans do tend to be slightly more religious than Democrats, 77 percent of Dems surveyed by Pew last year said they "never doubt the existence of God." Sixty-two percent of Democrats also agreed that prayer is an important part of their daily life, and that “we will all be called before God at the Judgment Day to answer for our sins.”

Democrats see Jackson's latest comments as evidence that the party isn't serious about being more inclusive after it's much-discussed autopsy report issued earlier this year. "The actions and rhetoric of EW Jackson and his scandal-plagued running mate are an embarrassment but the sad fact is that they are the standard bearers of today’s Republican Party that are pouring in resources in direct support of the Virginia Republican ticket. It’s high time for the Republican Party to stand up to the extreme elements that are calling the shots in today’s GOP, but I won’t hold my breath," DNC communications director Michael Czin said in an email.

UPDATE: In a statement to Salon, Virginia Republican Party Chairman Pat Mullins said he disagrees with Jackson's comments. "I do not agree with that statement. My parents were Democrats, and I've got a lot of Democratic friends in Christian churches all around Virginia," he said.