"Catfish" tells the truth about dating in America

The show reveals the way we think about relationships as economic transactions, where what matters is our "value" 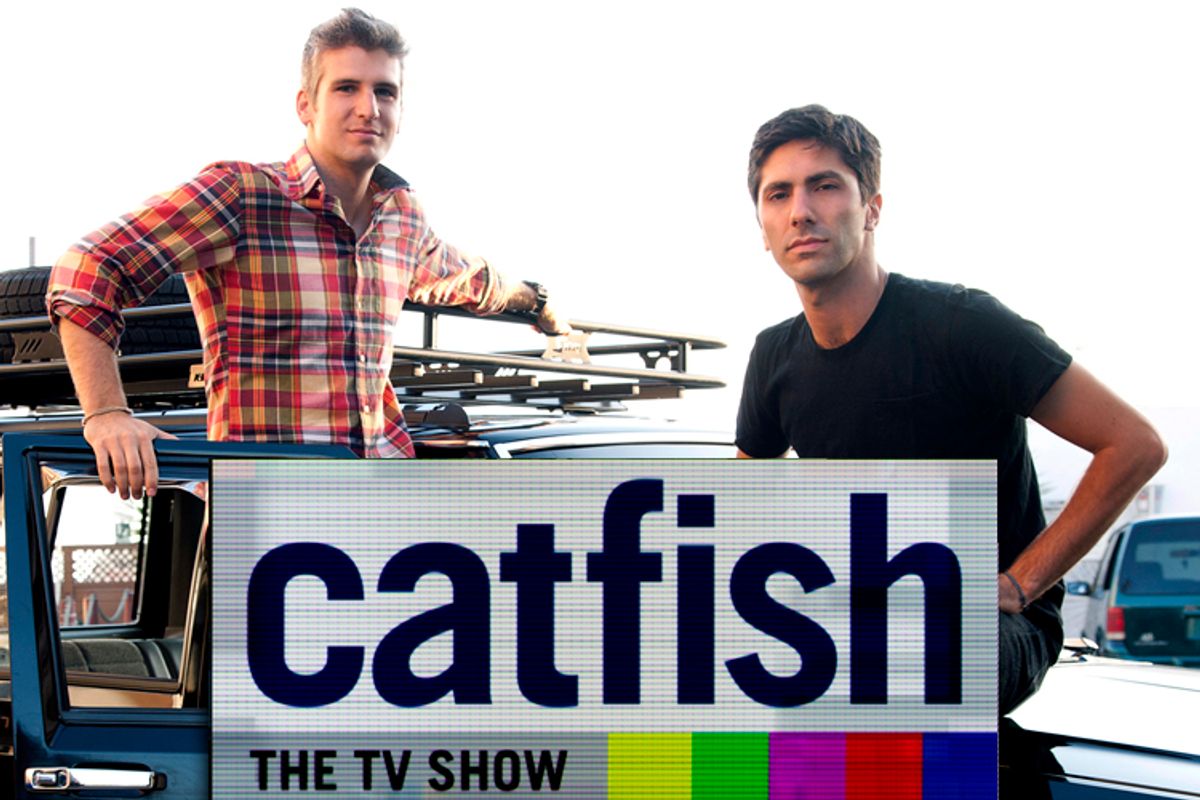 With Weinergate II landing hard last week, the mismatch between online and "real life" identities — to whatever degree they can be separated — no longer comes as a shocker. But on "Catfish: The TV Show," MTV asks us to see some creepy things we can’t unsee about our dating culture. Beyond the obvious deceptions that the show serves up to eager rubberneckers, we see the most disturbing scam of all: our eerily economic approach to dating.

Each episode follows love-drugged saps across the US who find themselves in online relationships that are deep and intimate, though perhaps not based on facts. The optimistic chump wants to transform the connection from ethereal to corporeal. In comes MTV’s Nev, a fancy, big-city reality TV host who uses his basic internet skills to locate the object of affection, uniting the would-be betrothed for the first time in the most awkward manner imaginable: on national TV. Tears are shed. Waivers are signed.

"Catfish" aims to capture a certain “reality,” loosely conceived, that includes fact and fiction, as well as the emotional truths in the space between. The show is bizarrely shot, with cameraman Max aiming a point-and-shoot camera at Nev while the rest of the crew shoots Max shooting Nev. Max points his camera at the laptop screen, revealing an effluence of intimate self-captured affection: sweet texts and private sexts interspersed with coy, fish-faced selfies from those whose identities have been clumsily spoofed. The show is as much an ad for the technologies through which we can reinvent ourselves online as it is an indictment of people who don't look like ads. And in the heart-stopping moment before each couple’s in-the-flesh reckoning, audiences are left to ponder (over the commercial break) whether real feelings can trump fake identities. With few exceptions, the answer is no.

Can you be in love with someone who stayed up all night soothing your wounds after a personal tragedy if you don't know that person's actual name? Can you be in love with someone with whom you had hot online sex, who seemed to know you better than you know yourself, if that person turns out not to be an "international model"? If you're in love with someone, what's the information that, if revealed, would make them fundamentally unlovable to you? Spoiler alert: the show's undistilled and disturbing suggestion is that obesity and lying about one's gender are our society's most unforgivable revelations.

"Catfish" promises to crack open the forensic psychology of why liars lie. Equally perplexing is why we lie to ourselves with all the damning evidence at our fingertips. Does Ramon reject Loyda because she lied to him? Or is it because Loyda doesn’t look like her avatar, bikini-clad Paola, whose photos Loyda snatched from someone else’s profile? After approaching Paola online, Ramon fell in love with her “amazing personality.” Loyda’s, presumably. When the two meet in person, Ramon is hurt and angry. MTV bleeps the most obvious reaction to the show’s entire premise, “that’s pretty fucked up.” We feel bad that Ramon sent her $3000 to help with her bills, and weirder when we learn that Loyda used it secretly to buy herself an engagement ring.

But Ramon quickly stops being the perfect victim when Loyda defends herself, revealing that he knew much more than he admitted to Nev and perhaps himself. She’d come clean three times, each time recanting when faced with her lover’s real-life sadness. She wanted to be seen and loved by him. There’s hurt in her voice when she pleads, “you called me by my name before.” For Ramon, the depth of his self-delusion is perhaps the biggest betrayal. If he had access to the truth all along, what did he visit Loyda to find out? Is he angry about Loyda’s lie or her appearance? The show dangles this grotesque suggestion in front of viewers' faces for entire painful minutes. The show invites us all to scream at the TV what Nev won't confront in front of his face, "If you loved her 10 minutes ago, why don’t you love her now?"  The encounter’s creepy afterimage leaves us wondering if he would have cut Loyda more slack if he found her as hot as Paola. Which exactly is the real deal breaker?

And how bad is a fake photo, anyway? Can we even agree on what would be an honest profile pic? Online dating norms have only begun to crystallize, but we know that lying is rampant and people are notoriously bad at identifying the qualities that make for a compatible partner. And as long as we insist on seeing romantic partnership in economic terms, we will keep measuring partners against each other in terms of their perceived value (how could she snag that hot guy? or I guess he must be rich?). It's precisely this transactional model that drives our umbrage when a photo leaves us with a sense of “false advertising.” For all the griping about misleading profile pics and the treachery of push-up bras, a woman’s misrepresentation of her looks—her value—is seen as not just a lie but a kind of theft.

What’s fascinating is the number of people on the show, men and women, who represent themselves as models: rare humans whose looks alone are worth cold, hard cash. The romantic economy is not a metaphor. How does it feel to be paired with someone whose looks are marked to market and judged valuable indeed? And what does it mean to find out on national TV that your bubble is burst? There’s plenty of commentary on the perils of dating-by-checklist, but we don’t much talk about the checklists enforced from the outside, the ones that have nothing to do with our authentic attractions or our ability to recognize humanity in those who might not match up. Last week's spoof blew the minds of Max and Nev because the spoofer was conventionally attractive, underlining the show’s assumptions about what's worth lying about. In Nev’s weekly post-breakup pep talk, he reassures Alexis that she’ll be OK. Her real life is not so bad. She has a “beautiful smile.”

The switcheroo, the old bed trick, is a tale as old as time, predating Madame X, Cyrano, and the the obsessions of the Bible. Throughout human imagination, it’s a trope that won’t quit. "Catfish" captivates us because each episode seems so preposterous, and yet the profound and relatable motivations are the same. The most compelling episode followed Kya and Alyx who catfished each other simultaneously. Two people, two sets of fake photos. Kya eventually came clean, relieved but also alarmed by Alyx’s instant forgiveness. With plans for marriage but no plans to video chat, Kya called in Nev’s assistance. Three Google searches later, we meet not Alyx but Dani, a trans man at the beginning of a difficult process. Kya’s compassion overshadowed the sting of the lie, and she wasn’t much concerned about the gender stuff. They both wanted to love each other, and they found a way.

Beyond rejection, we know that Dani's fears are rooted in a terrifying reality that the show repeatedly touches but does not tackle head-on. Violence and bullying against LGBT youth are pervasive, with 9 out of 10 experiencing harassment in schools, and trans people in particular facing a tragic barrage of dangers, including an astronomical risk of domestic violence. Big picture aside, Kya and Dani modeled a kinder, gentler encounter than the usual "Catfish" fare. Not everyone is going to be a match, for a variety of reasons including but not limited to attraction. But the episode leaves viewers with a sense that even if this hadn't worked out, the two were prepared to treat each other with humanity, reflecting Kya’s mom’s GIF-worthy response to Dani's gender identity, “as long as they treat you with the dignity and respect that you deserve, that is all I care about.” More of that, please. It helps that neither of these two was a cold-hearted snake looking for random women to practice his “game” on, as in this week’s episode that provoked some unusually unambiguous ire from Nev and Max, dropping a string of f-bombs and noting, “people are gonna think you’re a douchebag.”

With Dustin Hoffman's recent tear-jerking mansplanation of why straight guys think that if they were women, they’d be the hot ones, we see how disturbingly comfortable we are damning other people by their looks. The catfish cite “low self-esteem” driving their lies. But is it simply low self-esteem to recognize that, in our culture, people will judge, dismiss, and dehumanize women based on their weight? That many people believe same-sex attraction should relegate someone to a life of invisible, lonely celibacy? Is it so misguided to reject these ideas and demand to be seen and validated, even if the seeing is a mis-seeing? Are the catfish the delusional ones, even if their jig will eventually be up, or is it the people who look past all evidence so that they can continue believing that they’re individuals with superior shells, upping their own sense of self-worth in the process?

I’m not minimizing the devastation that comes from being conned. While the the catfishing trap is cruel and short-sighted, it’s perhaps also an authentic resistance against the voice in our culture that says that some people deserve intimacy and others don’t, and that you only need to look as far as a profile pic to tell which one is which. For a show that doesn’t mess much with real reality, it offers some true revelations about the romantic consumerism that we cling to no matter how uncanny the fiction: a world where we're living in the body we want, loved by the people we want, and looking hot in the photos we uploaded onto the laptop that we want to have already paid off.

Melissa Tapper Goldman creates content sometimes about other media and sometimes for its own sake. alliedfields.com