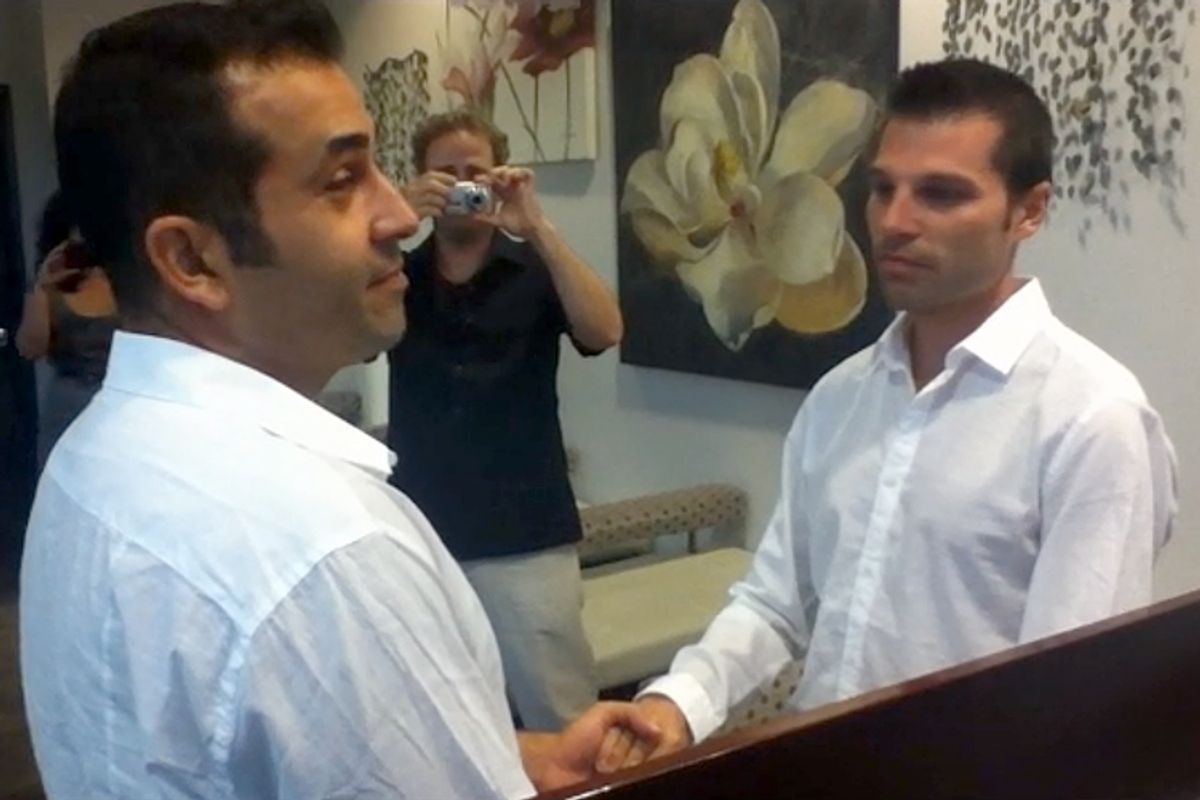 Lest we think that Pope Francis' statement earlier this week that "If someone is gay and he searches for the Lord and has good will, who am I to judge?" would immediately usher in a bold new era of tolerance in the Catholic Church … oh come on, none of us really thought that it'd be that easy, did we? So who's surprised that a California Catholic school recently canned a veteran teacher shortly after he married his partner?

English instructor Ken Bencomo had taught at St. Lucy's Priory High School in Glendora for nearly 17 years. And shortly after the Supreme Court reopened the door for marriage equality in June, the 45-year-old Bencomo married his partner of a decade, Christopher Persky. Nothing more might have come of it but a few new household appliances, had not the Inland Valley Daily Bulletin run a story about newly married local same-sex couples. Included with the piece were photos and a video of a jubilant Bencomo and Persky. Persky told the paper, "We're just really excited about having the same rights as our friends and family." And he shared a story of how, a few years prior, Bencomo had not been permitted to visit him in the hospital after surgery, because he wasn't considered "family." "When civil rights are being intruded upon," he said, "it's great that the Supreme Court can step in and say, 'That's not allowed.'" So what happened after such a beautiful, hard won-victory, such a bittersweet moment of love conquering all? St. Lucy's turned around and told Bencomo they would not be renewing his teaching contract for the fall.

Bencomo's attorney Patrick McGarrigle has said that the school has known of his orientation for the past decade and that he has introduced Persky to administrators at school events. But, he said, officials "specifically mentioned the wedding and the publicity it received" when they told him he would not be returning to work. "Ken was one of the school’s star educators and the decision to terminate him because he lawfully married a man is just heartbreaking to him –- it's crushing," he said. "The school went to the Draconian measure of firing him without warning and without legal reason. They haven’t expressed any interest in finding a way for Ken to return." Through a spokesman, the school issued the terse statement that it is "a community of faith for those who wish to express, practice and adhere to values in education based on the Roman Catholic tradition."

Bencomo isn't the only person kicked to the curb by a Catholic school for teaching while being gay. Earlier this year, an Ohio jury awarded Christa Dias more than $170,000 in her discrimination lawsuit against the Roman Catholic Archdiocese of Cincinnati. Dias, a lesbian, was fired after she became pregnant via artificial insemination. The diocese, in the meantime, had claimed "there was no discrimination" and that Dias had violated her contract to abide by Catholic doctrine. And this past spring, also in Ohio, Carla Hale claimed she was fired from Bishop Watterson High School after 19 years when a self-proclaimed "concerned parent" pointed out that Hale's mother's obituary mentioned she was "survived by her daughter Carla and her partner." In a statement, the diocese said, "All Catholic school personnel at the outset of their employment agree that they will abide by the rules, regulations and policies of the Catholic Diocese, including respecting the moral values advanced by the teachings of Christ."

As a Catholic school vet myself, I find these capricious, hateful dismissals especially galling. They tell students, in a clear and explicit way, that being honest about your identity is a punishable offense -- which is as unkind and un-Christian a thing as I can imagine. To look at Bencomo and Persky's emotional, overjoyed faces on their wedding day and think, they don't deserve to work now, is unconscionable. Any institution that hurts its hardworking educators – and hurts them for having children, for losing their mothers, for exercising their legal right to marry – has totally lost sight of what its alleged "values" really are. And one that desperately needs to be taught a lesson.