Snowden, Manning: The face of patriotism 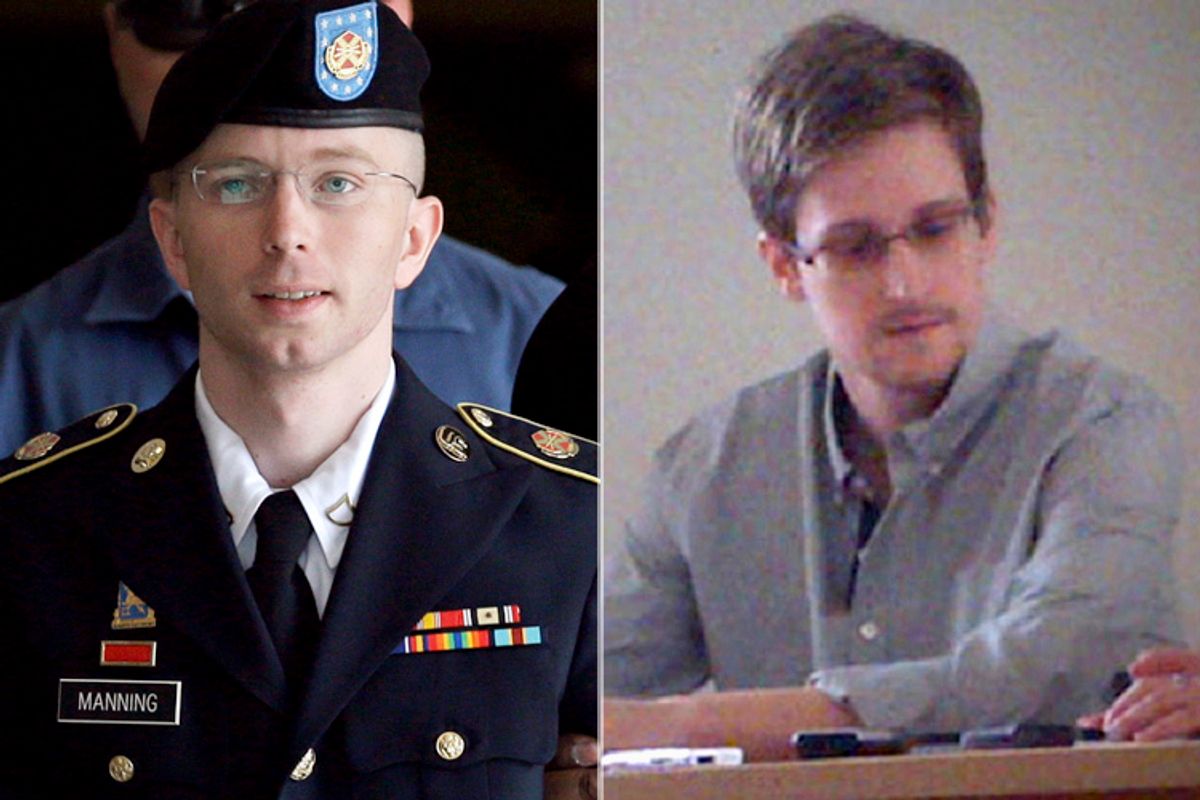 A big week on the spookery front -- and some of the news is good. With asylum in Russia, Edward Snowden stands a chance of a long, honest life on the preferable side of prison bars. Bradley Manning was released from charges of “aiding the enemy” when he transmitted 700,000 diplomatic messages to WikiLeaks three years ago. Constitutional rights advocates are especially pleased about the Manning decision.

Here is how Snowden saw things after the Russian Federation granted him a one-year visa on Thursday, allowing him to leave the Moscow airport for the first time since he arrived on June 23. “Over the past eight weeks we have seen the Obama administration show no respect for international or domestic law,” Snowden said by way of a WikiLeaks release, “but in the end the law is winning.”

I am with him on the first half, but not the finale. A lot of us may think the law is winning as we come to terms with the surveillance apparatus and secret illegalities of the American government as Snowden and Manning have exposed them. And a lot more of us wish the law were winning, surely. But it is not.

Also this week, and again by way of Snowden, the former contractor of the National Security Agency, we learned that the NSA is operating yet another immense eavesdropping technology, this one giving unfettered access to the universe of email, Web browsing, chat rooms and so on. This one follows Prism and is called XKeyscore. (You have to love these names.) Even with the exposure of XKeyscore, we hear little concern from any quarter that these technology applications are illegal. The discussion is wrongly tilted toward what such systems can do and away from whether they should do it — means, not ends.

So it is that we see this week the emerging shape of the response to recent revelations that it is best to anticipate from the White House, Congress and the NSA itself. They are all on the same team, it turns out. It is not a daring prediction, but get ready for nothing to happen at the last moment.

The Obama administration defends the legality of the surveillance monster with preposterously unconstitutional arguments — doublethink dressed up as befuddling legalese. The NSA tells us nothing can change without jeopardizing American security — the argument intended to stop all arguing (as historically it has). And Congress is making its usual feints to persuade voters how upset it is even as it rejects the mildest reform legislation. Capitol Hill is merely keeping the ball in the air until the national ADD kicks in and most people forget about it all.

One is pleased that Edward Snowden is safe. Although Bradley Manning is to be sentenced on 20 lesser charges, he could have faced a life sentence. So it is good to think he may walk freely before he needs a Zimmer frame. These people are heroes. They both risked their lives, and in any outcome Manning is to surrender a lot of his. They did what they did for the sake of their consciences and for America’s integrity, such as it is, not for any “enemy” or “foreign power.” No one looking squarely at these cases can take the official position on this point at all seriously.

Having revealed what is being done in our names — done to us and to others — Snowden and Manning give us a responsibility, a duty. We are obliged to recognize that America is regressing into a historically unprecedented reinterpretation of its Constitution and the protections arising therefrom. “Corruption” is actually the better term.

It comes to this: We must keep our 18th century Constitution because it is our claim to be the world’s chosen people. But the Constitution was not written with any thought of the technological capabilities science and industry would bring our way. So we are asked to accept that much the government does — more all the time — is not subject to constitutional constraints. This course will ultimately give the document the value of loo paper.

Our duty is to see the danger of this course and decide if we accept it. Even now we participate in the making of a world more diabolic than anything Orwell or Aldous Huxley imagined.

Paranoid, you say. The guy is a Cassandra. I do not think so. Anyone still in the “It can’t happen here” camp reads too many Golden Books full of exceptionalist fairy tales. The reality is we are watching “it” happen.

Some years before he left us, Daniel Patrick Moynihan, the New York senator, wrote a book called "Secrecy." In it he traced the use of secrecy as an instrument of governance since World War I. He gets to 1971 and writes, “The moment had come when the rituals of secrecy could move into the center of political life.” He referred, of course, to Daniel Ellsberg and the Pentagon Papers.

It kind of makes you feel at home, perversely enough. Four decades on, it lends a little ballast to the current conversation.

The Obama administration discourages comparisons between Snowden and Manning, on the one hand, and Ellsberg on the other. Ellsberg was (and is) a credible dissident. Snowden is no dissident, White House spokesman Jay Carney reminded us for the umpteenth time this week. He is a criminal. As for Manning, get ready for the new drift in the newspapers. He is no dissident, either. He is an off-balance misfit with a bad childhood behind him and confusing sexual preferences.

The importance of this kind of language should not be missed. If you judge someone a dissident, that person bears credibility and you will ask, “Dissenting from what?” There is context. Criminals and kooks warrant no such inquiry. They are imprisoned or otherwise incarcerated, and there is no need to ask anything. They have no context.

Obliterating context is one way America’s leaders maintain the desirable degree of confusion among the citizenry. This, too, should not pass us by at this moment.

Remember Richard Perle, the right-wing political hack and intellectual poseur, after the Sept. 11 attacks? “We must decontextualize terrorism,” Perle said on repeated occasions. “Any attempt to discuss the roots of terrorism is an attempt to justify it. It simply needs to be fought and destroyed.”

Perle went straight to the point as it remains intact among us. I mark that comment among the first truly important stupid things said in the 21stcentury. More to come, of course.

The habit of destroying history is hardly new in America. It was at its most evident during the Cold War, but it extends back further and is still with us. We now enter a time when our nation makes and destroys history simultaneously. Soon we will have no useful understanding of how we live, what we do or who we are. It is already shaky, I have to add.

Read the history texts, and you will see that America’s famous and quite admirable confidence has from the first been accompanied by an anxiety as to all others. Security is our traditional obsession — and I stand by the term. It reflects nothing so clearly as the depth of our insecurity. These are habits we are now tasked with overcoming. We have to if we are going to be any kind of decent nation in the 21st century.