As an author, marketing myself is a crucial part of the business -- but that doesn't mean I hate doing it any less 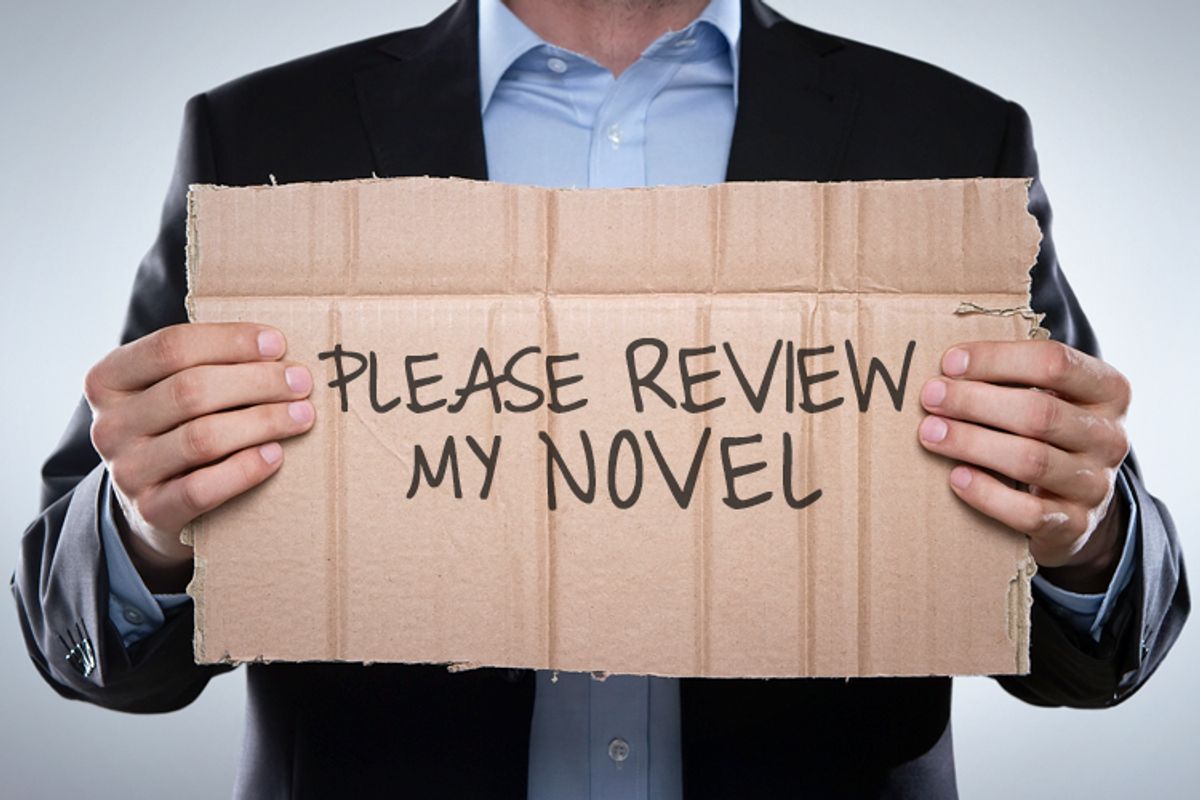 I HATE FACEBOOK. I hate Twitter. I spend a lot of time on both. At least a solid hour a day. I also maintain a website, have a Tumblr, an Instagram account, a tour website, a tour page, and a YouTube channel. Since I don’t feel comfortable posting much about my personal life, almost the entirety of my time online is spent promoting one of my books. I usually do it somewhat obliquely, using random jokes to deliver the requisite dose of self-serving self-deprecation. But there is no doubt that in every instance, like a Jehovah’s Witness or shady mortgage financier, I am blatantly hawking some aspect of what I have chosen to view as a career.

It reeks of desperation, these pleas, this constant litany: read me, recognize me, buy me, buy me again. On an authorial scale, being relatively unknown and resolutely Mid-list is like spending a few years on the floor of a deafening concert, angling for attention from every quarter, stuck in a sweaty throng of the equally disregarded, ultimately reduced (en masse and from the obstructed view seats) to holding up a lighter and screaming at the bass player–who couldn’t possibly give less of a shit, even if he could hear above the distortion and tinnitus and quart of hastily guzzled Jack Daniel’s.

I have 975 followers on Twitter, an embarrassing pittance for anyone trying to move units. That number rises and falls, but tends to remain fairly constant regardless of what I tweet: funny, political, serious, emotional, or just plain propaganda. I find composing (composting?) a worthwhile thought in the span of 140 characters to be a mostly pointless exercise, the writerly equivalent of being sewn into a sleeping bag with a flashlight and the Dummy’s Guide to Semaphore. I also feel a mixture of contempt and sadness when I see other authors (often friends of mine) typing things like “Here’s my new book trailer!” or “I’ll be appearing at Barnes & Noble on Wednesday!” or “Win a signed copy of something so valueless I’m giving it away for free!” mainly because it’s embarrassing to watch their yearning for bandwidth slam against the indifference of a million kitten-occupied Twitter accounts. And yet I write exactly the same sort of things myself, again and again and again.

I have two Facebook pages; a personal and an author page. My author page has 2,229 “fans,” a large percentage of which seem to hail from Malaysia. I have no idea why. On my personal page, I have 775 friends, most of whom I do actually know, or at least have met at some reading or conference or cocktail party. Although there are plenty I have zero clue about and who can’t possibly know me. Those are the ones who tend to comment the most enthusiastically, which is a disconcerting notion.

Meanwhile, my family has acquired Promo Fatigue Syndrome–a condition associated with reflexive conversation-ending, rude topic-changing, abrupt room-leaving, and a tendency to insist that they have “long since given up reading books of any kind.” Our neighbors rarely come out of their houses. At work, my colleagues shamble by, bleary-eyed with exhaustSEAN. Even the rare sub-group of geeky acolytes and plucked-eyebrow fanboys that once bought Infects T-shirts and You Killed Wesley Payne stickers by the fives and tens decided to block me long ago.

And then, on November 16th, 2011 at 7:55 a.m., a very dangerous critical mass was reached: every single person I ever went to school with, from kindergarten to high school to college, became fully sentient. By which I mean, acquired the vague awareness that I have a book or something out. At noon of the same day a second damning mark was plateaued: each of those classmates independently reached the subconscious but irrevocable conclusion that they have absolutely no desire to hear about any goddamned thing I’ve ever written, ever again.

I don’t blame them one bit.

In fact, I’m almost certain my years-long squat of self-promotion has been entirely pointless. If I could have back every minute I’ve spent on social media and apply it to churning out actual prose, I would probably have finished at least one bestselling swords-and-incest fantasy trilogy instead. Maybe even two. In any case, it’s pretty clear that whoever reads what I post (a diminishing coterie, to be sure) has either already bought whatever book I’m flogging, or never had any intention of doing so in the first place. Everything else is just more white noise, a narcissistic armada of turds floating down the center of the Hudson, or the river of pixels, or the throat of the cybersphere. We’ve all heard it before, seen it before, been pitched everything from Sham Wow to rote sham. We’ve sat through a lifetime of fifteen-second commercials in order to watch the ubiquitous YouTube clip of some Khaki Dad taking a Wiffleball to the nuts. Like everyone else, I am truly and deeply bored by the incessant marketing and self-promotion that comprises a majority of any day spent in front of any screen.

But not nearly as bored as I am by my own.

So why do I keep shoving the collective face between my spread pages? Why do I continually force the communal nose deep into my gluey bindings?

Mainly because publishing a book is an exercise in terror.

Yes, nothing rivals the ennui and impotence that comes with the very real possibility that a week after your book is published, (the culmination of years of obsessive scribbling, mental wreckage, familial damage, and quivering vulnerability) it will be quickly forgotten, widely ignored, aggressively un-reviewed, pulled from shelves, and thoroughly remaindered. In writing there is no safety net, no structure below, just an Amazon ranking and the mystery of Internet buzz. There is the kindness of friends and the randomness of reviews, but they pale in the face of rote indifference.

I had no clue what I was getting into when my first book came out. I barely told anyone. I was embarrassed to. It would have directly contravened my lifelong policy of remaining enigmatically detached from all things that even hinted at vanity, while secretly being very vain–I just wanted the accolades to originate from somewhere less obvious. Not any more. I am now my biggest booster, each sentence a hypo to the cultural mainline filled with blinking promotional neon and liquified thesaurus.

But late at night, when I am alone and naked in our vintage pink-tiled bathroom, I look in the mirror and cringe at the notion of my twenty-year-old self catching a glimpse at the hoop-jumping fool I am now. That young dude would be truly horrified. That young dude would smash furniture and tear shit up. In fact, he’d kick my ass out into the street like Denzel busting a crease in Ethan Hawke, denounce me as a media whore, fling my laptop into the ocean, and then force me to get re-hired at my old construction job, pronto.

The thing is, it wasn’t always this way. Publishers used to do most of the marketing for the books they put out. The best an author could do was finish the last chapter and then show up reasonably sober for a tri-city book tour. The hope was that the book would eventually be widely reviewed, and then take off on the strength of word-of-mouth. But social media has crushed that seemingly innocent past.

I was the last of my friends to get a cell phone, and acted for a long time like not connecting to the internet was some sort of anti-corporate political statement. Or at least a nod toward the many pleasures of being a stubborn anachronism. But those days are long gone. Authors are a manufactured persona, often just as much of a commodity as their books. They are expected to become promotional machines, a brand, an online industry of extra-novel content that pours from the smokestack of their Innate Marketing Genius, while releasing noxious gas from the vent of their publisher’s Zero Marketing Budget. In other words, you are responsible for your own book unless you’re John Grisham. And even he bitches about his promo budget.

It’s essentially the record business model. A label signs 100 bands and tosses a few singles out there, hoping one gets noticed and blows up. Meanwhile, they spend all their cash stroking Mariah Carey, who is going to sell the same shit-train of albums regardless. The label does nothing to promote the 100 unknown bands, and if their singles die–which almost all of them do–so be it. Contracts were made to be canceled. But there are rare unexpected and random hits, and that’s where the money comes from. Suddenly The Black Keys, once an indie/cult fave, sell a single to Volkswagon, and then the label swoops in with a posse of suited publicity tools, VH1 chicks, and comped tables at Spago.

Writers are an odd lot. A volatile mix of bravado, insecurity, insatiable need, unusual discipline, and occasional talent. Despite that fact that writing itself is a lonely, obsessive, and mentally unstable vocation–just the sort of pursuit that lends itself to anti-social habits and behaviors–authors are likewise expected to be great in front 0f a crowd, hilarious at the podium, and engaging at the lectern. They are expected torepresent the worth of their prose through expressions of personal charm. Which is, of course, completely ludicrous. But since the collapse of publishing (or at least the explosion of dire, whiny articles about the collapse of publishing), publishers themselves no longer spend the requisite money to advertise the existence of all but a handful of titles.

So, as a self-employed independent contractor of suspect means, you either have to get out there and market yourself, or choose to remain silent and hope for the best. In an industry where 150,ooo titles were published last year, hoping for the best tends to be a failing strategy–if not a bit naive. Therefore one is forced to ask themselves, “If I am not going to make the effort to publicize my own work, why aren’t I a third-year law student instead?” Further, and most damningly, “If people are not reading what I write, why am I writing at all?”

For me, the answer is pure communication–an intellectual exchange. Telling a story is the first step. Having that story read and enjoyed and interpreted and understood is the second. Obviously I would like to do so on the largest scale possible. Forget bestsellers and movie rights and relative fame and huge advances (although all those things would be nice in their relative ways), the bottom line is that if I am not communicating with a sizable group of readers, if I am writing in a vacuum for a static body of acquaintances–spending six hours a day in front of a laptop for ten years suddenly seems like a masturbatory and delusional exercise.

The great white hope of writing is to reach the point where you no longer have to pimp yourself at all, where you tap into a weird alchemy in which you suddenly have enough name recognition and sales that word-of-mouth and momentum do all the work for you. Then you can sit back and troll Facebook, posting cake recipes and cat pictures and acting like your royalties are preordained and that you are way, way too cool to flog yourself ever again–as if you ever had.

Yeah, I want to get there. But mainly because I love writing, I love what I do, and I don’t ever want to go back.

Oh, and by the way, my new book, Wise Young Fool comes out in exactly one week. It’s a raw-throated punk rock black comedy love story. Slated to move a million units. Or at least a couple dozen.