Shakespeare defined our concept of nothingness

"If it be nothing I shall not need spectacles" 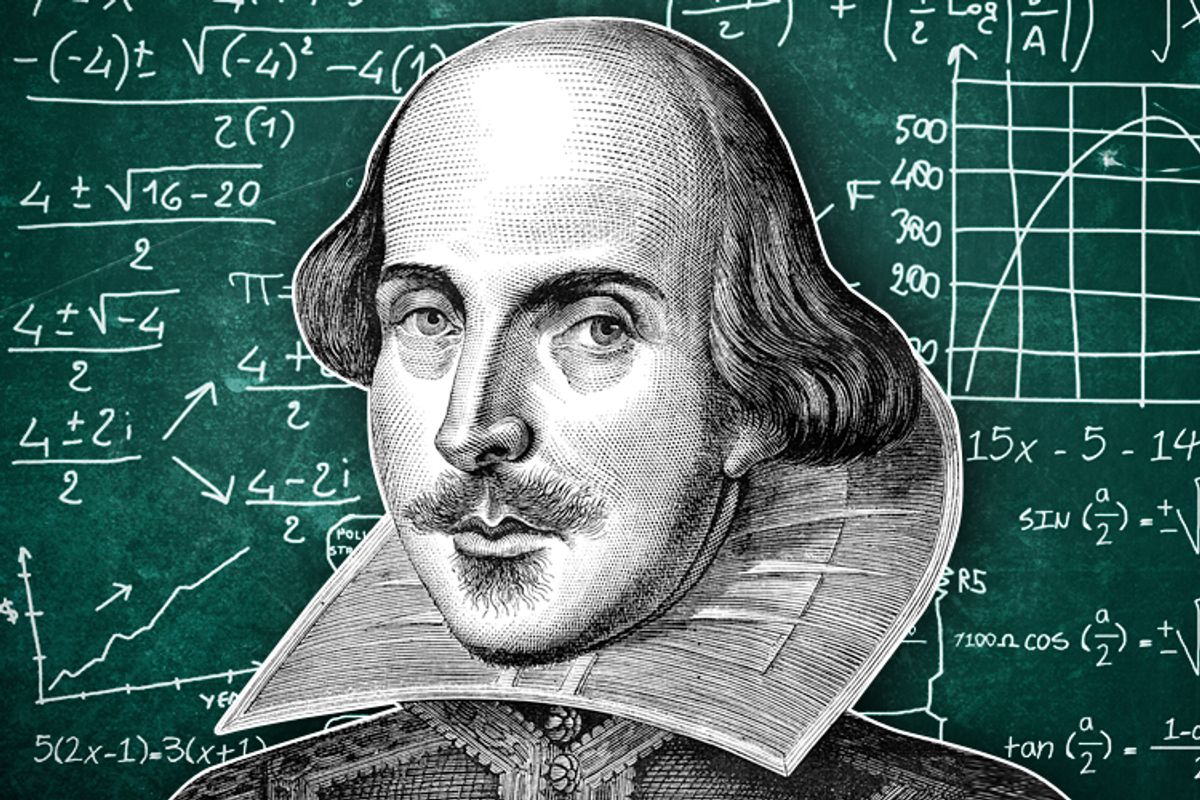 Excerpted from "Thinking in Numbers"

Few things, to judge by his works, so fascinated William Shakespeare as the presence of absence: the lacuna where there ought to be abundance — of will, or judgment, or understanding. It looms large in the lives of many of his characters, so powerful in part because it is universal. Not even kings are exempt.

The scene is one of the tensest, most suspenseful moments in theater, a concentration of tremendous force within a single word. It is the ultimate negation, tossed between the old king and his beloved youngest daughter, compounded and multiplied through repetition. Nothing. Zero.

Of course, Shakespeare’s contemporaries were familiar with the idea of nothingness, but not with nothingness as a number, something that they could count and manipulate. In his arithmetic lessons, William became one of the first generation of English schoolboys to learn about the figure zero. It is interesting to wonder about the consequences of this early encounter. How might the new and paradoxical number have driven his thoughts along particular paths?

Arithmetic spelled trouble for many schoolmasters of the period. Their knowledge of it was often suspect. For this reason, lessons were probably short, often kept until almost the final hour of the afternoon. Squeezed in after long bouts of Latin composition, a list of proverbs or the chanting of prayers, the sums and exercises were mostly drawn from a single textbook: The Ground of Artes by Robert Recorde. Published in 1543 (and again, in an expanded edition, in 1550), Recorde’s book, which included the first material on algebra in the English language, taught “the work and practice of Arithmetike, both in whole numbres and Fractions after a more easyer and exarter sorte than any like hath hitherto been sette furth.”

Shakespeare learned to count and reckon using Recorde’s methods. He learned that “there are but tenne figures that are used in Arithmetick; and of those tenne, one doth signifie nothing, which is made like an O, and is privately called a Cypher.” These Arabic numbers — and the decimal place system — would soon eclipse the Roman numerals (the Tudors called them “German numbers”), which were often found too cumbersome for calculating.

German numbers were, of course, letters: I (or j), one; V, five; X, ten; L, fifty; C, one hundred; D, five hundred; and M, one thousand. Six hundred appeared as vj.C and three thousand as CCC.M. Perhaps this is why Recorde compares the zero to an O. Years later, Shakespeare would deploy the cipher to blistering effect. “Thou art an O without a figure. . . Thou art nothing,” the Fool tells Lear, after the dialogue with Cordelia that destroys the king’s peace of mind.

In Shakespeare’s lessons, letters were out, figures (digits) in. Perhaps they were displayed conspicuously on charts, hung up on walls like the letters of the alphabet are now. Ten to a hard bench, the boys trimmed and dipped their quills in ink, and their feathered fingers copied out the numbers in small, tidy lines. Zeroes spotted every page. But why record something that has no value? Something that is nothing?

England’s medieval monks, translators and copiers of earlier treatises by the Arab world’s mathematicians, had long before noted the zero’s almost magical quality. One twelfth-century scribe suggested giving it the name “chimera” after the fabulous monster of Greek mythology. Writing in the thirteenth century, John of Halifax explained the zero as something that “signifies nothing” but instead “holds a place and signifies for others.” His manuscript proved popular in the universities. But it would take the invention of Gutenberg’s printing press to bring his ideas to a much wider audience, including the motley boys of King’s New School in Stratford.

Gloucester: What paper were you reading?
Edmund: Nothing my lord.
Gloucester: No? What needed then that terrible dispatch of it into your pocket? The quality of nothing hath not such need to hide itself. Let’s see: Come, if it be nothing I shall not need spectacles.

The quality of nothing. We can picture the proto-playwright grappling with zero. The boy closes his eyes and tries to see it. But it is not easy to see nothing. Two shoes, yes, he can see them, and five fingers and nine books. 2 and 5 and 9: he understands what they mean. How, though, to see zero shoes? Add a number to another number, like a letter to another letter, and you create something new: a new number, a new sound. Only, if you add a number to zero, nothing changes. The other number persists. Add five zeroes, ten zeroes, a hundred zeroes if you like. It makes no difference. A multiplication by zero is just as mysterious. Multiply a number, any number — three, or four hundred, or 5,678 — by zero, by nothing, and the answer is zero.

Was the boy able to keep up in his lessons, or did he lag? The Tudor schoolmaster, violence dressed in a long cloak and black shoes, would probably have concentrated his mind. The schoolmaster’s cane could reduce a boy’s buttocks to one big bruise. With its rhyming dialogues (even employing the occasional joke or pun) and clear examples intended to give “ease to the unlearned,” we can only hope that Recorde’s book spared Shakespeare and his classmates much pain.

The first place is the place of units or ones, and every counter set in that line betokeneth but one, and the seconde line is the place of 10, for everye counter there standeth for 10. The thirde line the place of hundreds, the fourth of thousands, and so forth.

Perhaps talk of counters turned the boy’s thoughts to his father’s glove shop. His father would have accounted for all his transactions using the tokens. They were hard and round and very thin, made of copper or brass. There were counters for one pair of gloves, and for two pairs, and three and four and five. But there was no counter for zero. No counters existed for all the sales that his father did not close.
I imagine the schoolmaster sometimes threw out questions to the class. How do we write three thousand in digits? From Recorde’s book, Shakespeare learned that zero denotes size. To write thousands requires four places. We write: 3 (three thousands), 0 (zero hundreds), 0 (zero tens), 0 (zero units): 3,000. In Cymbeline, we find one of Shakespeare’s many later references to place value (what Recorde in his book called each digit’s “roome”).

Three thousand confident, in act as many —
For three performers are the file, when all
The rest do nothing — with this word “Stand, stand,”
Accommodated by the place . . .

The concept must have fascinated him ever since his schooldays. A nothing, the boy sees, depends on kind. An empty hand, for example, is a smaller nothing than an empty class or shop, in the same way that the zero in 10 is ten times smaller than the zero in 101. And the bigger the number, the more places and therefore the more zeroes it can contain: ten has one zero, whereas one hundred thousand has five. He thinks, the bigger an empty room, the more the things that can be contained inside: the greater an absence, the greater the potential presence. Subtract (or “rebate” as the Tudors said) one from one hundred thousand and the entire number transforms: five zeroes, five nothings, all suddenly turn to nines (the largest digit): 99,999. Perhaps, like Polixenes in The Winter’s Tale, he sensed already the tremendous potential of self-effacement, understood imagination as shifting from place to place like a zero inside an immense number.

And therefore, like a cipher [zero]
(Yet standing in rich place), I multiply
With one “We thank you” many thousands more
That go before it

Recorde’s book abounded with exercises. Shakespeare and his classmates’ sheets of paper would have quickly turned black with sums as they measured cloth and purchased loaves and counted sheep and paid clergy. But William’s mind returns ceaselessly to the zero. He thinks of ten and how it differs from his father’s ten. To his father, ten (X) is twice five (v): he counts, whenever possible, in fives and tens. To his son, ten (10) is a one (1) displaced, accompanied by a nought. To his father, ten (X) and one (i) have hardly anything in common: they are two values on opposite ends of a scale. But for the boy, ten and one are intimately linked: there is nothing between them.

Ten and one, one and ten.

The boy sees that, with a retinue of zeroes, even the humble one becomes enormously valuable. Imagination can reconcile even one and one million, as Shakespeare affirmed in his prologue to Henry V, when the chorus stake their claim to represent the multitudes on the field of Agincourt.

O, pardon! Since a crooked figure [digit] may
Attest in little place a million,
And let us, ciphers to this great accompt,
On your imaginary forces work

But it is perhaps in his poetry that the boy — now a young man — would most clearly express the impact of Recorde’s teaching on his mind. In Sonnet 38, Shakespeare wrote about the relationship between himself and his beloved Muse, comparing their couple to a ten: the poet, the zero, and his beloved, the one.

O, give thyself the thanks, if aught in me
Worthy perusal stand against thy sight . . .
Be thou the tenth Muse, ten times more in worth . . .

This relationship, as everyone knows, would prove remarkably fruitful: his poems and plays multiplied. In the Globe Theatre, round as an O, an empty cipher filled with meaning, Shakespeare’s loquacious quill drew crowds.

“Shakespeare was the least of an egotist that it was possible to be,” wrote the nineteenth-century critic William Hazlitt. “He was nothing in himself; but he was all that others were, or that they could become.” That nothing, who had once been a dazzled schoolboy, laboring for the breakthrough moment when he comprehended the paradoxical fullness of the empty figure of a zero, would surely have been delighted with this description.