Disney, Sony and Warner Brothers have made fanboys of us all. Creator-owned media may be our only salvation 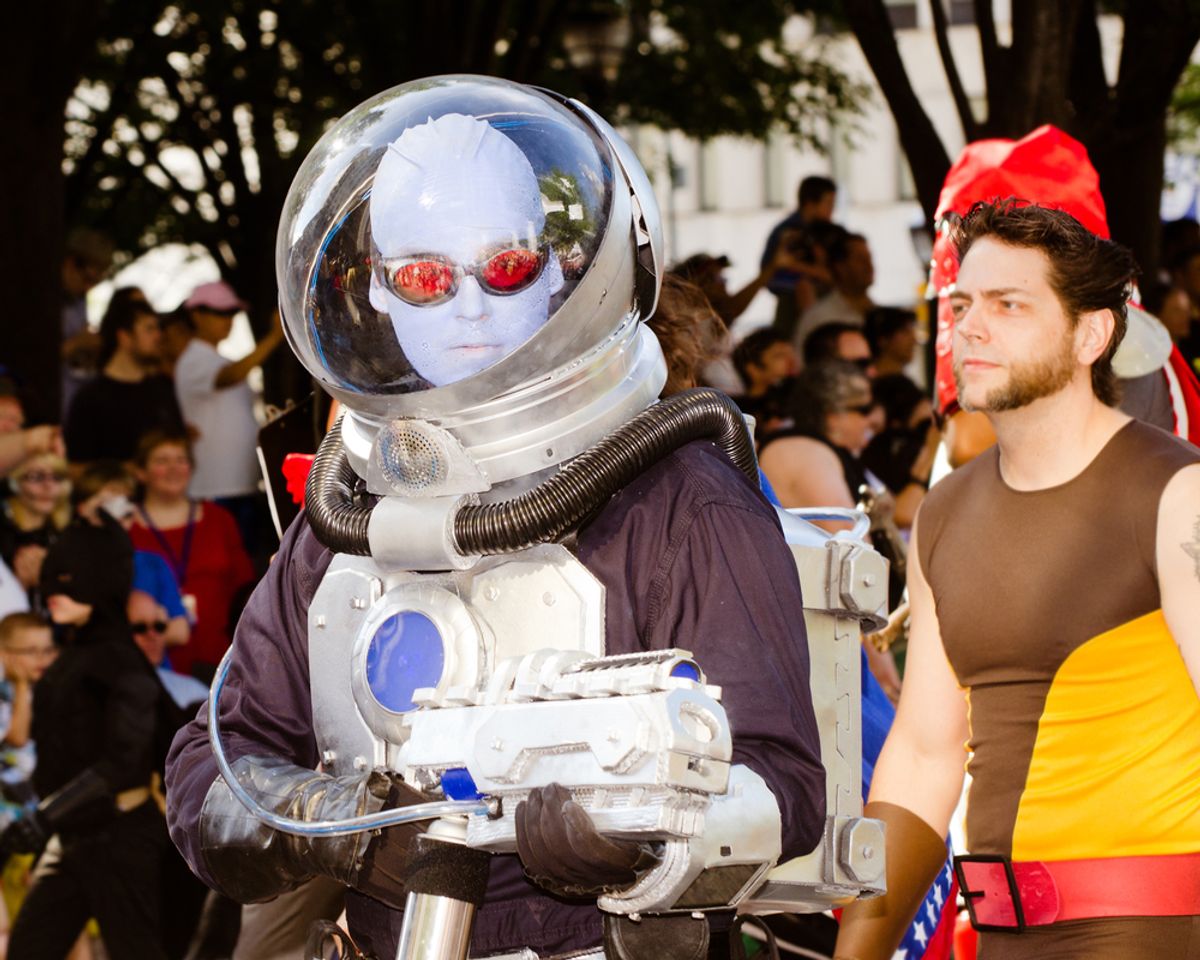 In 2009, a small budget but critically successful film called Big Fan hit theaters. The film’s action centers on Paul Aufiero — a man obsessed with the New York Giants to the exclusion of all other pursuits — and the rapid collapse of his life after a chance encounter with his favorite player.

Paul is a geek. A stereotypical (as defined by big media) geek. He lives with his mother, is a portly white man in his mid-30s, has no sexual relationships to speak of, and finds personal validation in his interactions with the subject of his fixation. The role works in no small part because Paul is played by Patton Oswalt, a comedian with impeccable geek culture credentials. The only difference between Paul and a stock geek culture character is what Paul geeks out about: sports. And sports, as we all know, are not geeky.

It was little remarked upon at the time, but the convergence of Oswalt’s casting, Paul’s obsessiveness over the Giants, and sports culture signified a new, more relevant understanding of the geek. In the world of Big Fan, the type of media Paul interacts with isn’t what designates him as a geek; it’s how he interacts with it.

We live in a world where comic book movies pull in record breaking box office numbers again and again, where Game of Thrones not only outsells mainstream fiction in book form but draws huge commercial and critical acclaim in television form, and where gatherings such as ComicCon — for years on the furthest periphery of mainstream consciousness — have become places for large scale entertainment news dumps. What was traditionally understood as geek culture is now the mainstream. Geeks are no longer marginalized outsiders; they’re the new normal.

This is hardly a new or novel observation, but it demands a fresh examination of what geekdom actually centers on. Just as Big Fan hints at, it’s instructive to examine interactions between consumers and media rather than the type of media being consumed, especially when it comes to corporate media.

Even by the narrow strictures of what’s traditionally accepted as geek culture, the whole thing isn’t remotely monolithic. The author, a proud participant in traditional geek pursuits, has a particular fondness for pen and paper roleplaying games — placing him below video gamers but on par with Star Trek fans — and enjoys Michael Moorcock, but can’t stand Star Wars, Doctor Who, or superhero comic books. This lack of uniform interests  is more common than not; what is portrayed as geek media is diverse, as geeks have varying tastes. If we’ve already fractured geek culture into a thousand cliques and interests, the term “geek culture” loses all meaning beyond one of vague convenience.

If, instead, we begin to look at the geek as someone who allots space for media interest alongside or in place of class, race, or gender identity, then a more meaningful pattern emerges. The geek gives primacy to media consumption, using it as both identifier and lens with which to view the world; what that media happens to look like is irrelevant. The tie that binds geeks of a given strain together is what they choose to buy.

This is touched on in the brilliant essay “Postmodern geekdom as simulated ethnicity.” Time and again, an observant critic will see geeks slip into language equating fans of a specific show (or book or game) with ethnicity or class. Sometimes this is extremely overt and even offensive, as a cursory web search for “nerd blackface” will reveal. More often, it makes subtle and innocuous claims that the opposite party in an argument needs to display “tolerance,” or calls for fewer identity politics within geek culture.

On its face, this is innocuous enough (outside the obvious offended sensibilities), but the simulated identity politics in question can become remarkably vicious. In my beloved roleplaying game circles, doxing and threats of violence over the internet occur regularly over which edition of Dungeons and Dragons people prefer. Go to any video game forum and one can see pages of arguments about which console is the “right” one to enjoy. On and on it goes, across intellectual properties and hobbies, right down to nearly breaking out in actual physical violence.

This is remarkably similar to diehard sports fan culture. It’s not merely that a disagreement exists over which consumed product is superior; it’s that the fan of the other team is an Other. This, again, blurs the lines between what we think of as geek fandom and non-geek. It’s not merely the identification with a certain product that makes these things similar; it’s also the behavior when those outside the manufactured tribe intrude. This helps explain the white male geek’s antipathy towards women and people of color: if media is non-inclusive, the subcultures which are defined by consumption of that media will be reflexively non-inclusive, as well.

Most alarming is that, almost exclusively, the media being so strongly identified with is corporate and ruthlessly capitalist in nature. Star Trek might present an optimistic and inspiring vision of the future, which any American liberal would like to see, but it’s a vision wholly owned and operated by CBS. Star Wars is now held by Disney and all of their attendant copyright shenanigans. So, too, is Marvel Comics — a company recently focused to an alarming degree on denying ownership rights to its content creators (watching comic book fans contorting themselves in order to justify continuing to support Marvel while admitting their favorite creators are left destitute by the company’s practices is depressing). Even Dungeons and Dragons — market leader in a dwindling cottage industry — is run by a subsidiary of toy behemoth Hasbro.

As a thought experiment, imagine brand loyalty that doesn’t have people nearly coming to blows over Doctor Who and Star Wars; think, instead, of the argument in question being over Disney and BBC. Or, for a starker contrast, instead of people dressed as Marvel characters at ComicCon, imagine Geico geckos or Progressive Insurance Flos. This is essentially already happening: what is Superman in the twenty-first century but a corporate mascot, albeit one with a lavish backstory? It’s no wonder that non-geeky media desperately tries to cultivate geek cred in the form of viral commercials or a presence at conventions. Having brand loyalty so intense that it can incite real or simulated violence would be a remarkable windfall for any company able to harness it.

As with so much of modern capitalist life, the acquisition and consumption of things serves as a substitute for actual class equality. If you have lots of cool stuff, why would you question whether your job sucks or whether your wage is fair? With the combination of imagined identity politics — which the new geek culture encourages — the alienation and loneliness of the working and middle classes is compounded. Practical ceilings on consumption and compartmentalized identity seal people off from their fellows even as they find commonality within their consumption cohort.

This is perhaps a harsh assessment, but none of this, it should be stressed, should be read as a dismissal of fandom or media consumption as a whole. Fandom can be inspiring and fun. Seeking out common interests is natural, and tempered escapism is vital to the healthy psyche of the working class.

What is worrying, though, is the slow creep of media consumption as a mode of living — something that is becoming not just visible but celebrated. This is divisive in the sense that imaginary tribes argue over trivialities, yes, but it also does the heavy lifting for the corporation — whether that corporation is Disney or the NFL — by placing acquisition as the new identity.

Neoliberalism has made geeks of us all: jocks, nerds, and dweebs alike. In the background are the corporate owners of the media which geeks love, setting man against woman, rich against poor, black and brown against white, all on manufactured lines of consumption. Ideally, the commonalities of working class identity would trump these, easily and swiftly, revealing the absurdity of the heated arguments between consumption cohorts which geek culture identity politics stir up.

If, however, these new lines of identity are here to stay, at least for the foreseeable future, the least that can be done is to create a concerted effort to free the media being consumed from the corporate realm. Imperfect as the process may be, creator-owned media is making a comeback. One person publishing houses and small indie video game studios are changing their respective industries as assuredly as art house cinema companies did the movie industry in the 90s. This burgeoning effort might not shake the new bonds apart, but they will loosen the reins of culture from the grip of Disney, Warner Brothers, and Sony. That is most assuredly an achievable victory worth fighting for.