"Orange Is the New Black": Just an edgier version of "The Help"

Despite the show's diversity, it never bridges the gap between its white protagonist and her fellow inmates 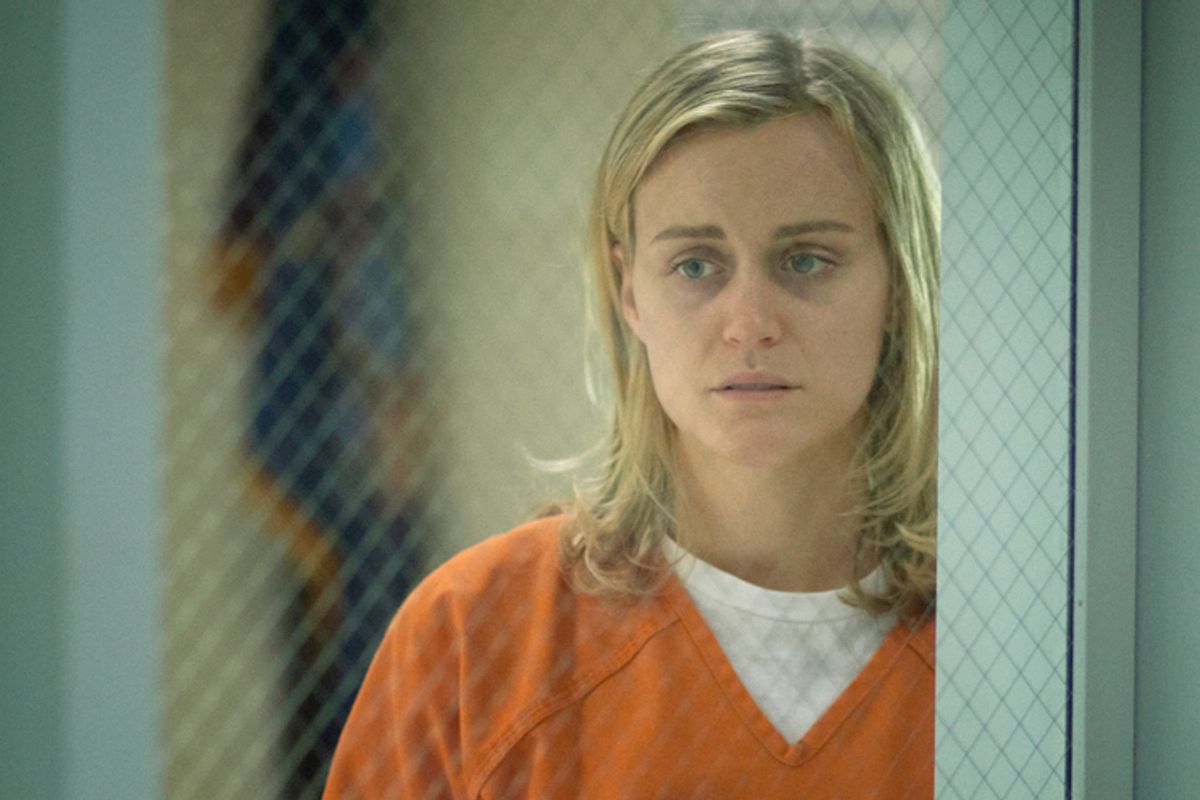 Perhaps fittingly, I watched “Orange Is the New Black,” the new show from “Weeds” creator Jenji Kohan, on stolen time. Since life with an infant doesn’t afford me much in the way of hour-long chunks of free time, I had to break my “Orange” into small pieces, which I consumed throughout the day, while cutting broccoli, going to the bathroom, or waiting for my husband to finish brushing his teeth. It took me just over a week to get through season 1.

Watching the show felt compulsory, but still, after each episode I felt a little off, even guilty. There were so many things to love about the show: the diverse cast, the window into a world I would likely never know, and the fact that, by virtue of being set in a women’s prison, it passes the Bechdel test with flying colors. But at the helm of this prison dramedy was Piper, a pretty, white girl who serves as the show’s axis mundi, giving white viewers like myself the cultural connection we apparently need to relate.

When the film “The Help” came out, it was criticized for parading itself as a story about oppression of black women, all the while remaining white at its core. The film's writer, director and protagonist were all white. Might “Orange,” with its white lead and writer, and its opening song from white artist Regina Spektor, just be an edgier version of “The Help”?

Of course, “Orange” is well aware of this tension and uses it as fuel for plot and punch lines. When Piper shows up to prison she is a WASP-out-of-Cape Cod-water, a former kale-eating, brownstone-living 30-something who received 15 months for her involvement with an international drug cartel years before. In prison, she relies upon her genteel Connecticut charm and morning-show psychology insight to work through conflicts with her inmates. For white middle-class viewers, the appeal of the show lies largely in our feeling that should we ever get to prison we would feel a lot like her.

Piper, or Chapman as she is called in prison where surnames prevail, is polite and open-minded toward the women she meets. Nevertheless, her encounters with other inmates, few of whom are much like her, are marked by an anthropological distance. This isn’t to say that these characters, and the women who play them, aren’t incredibly rich. Characters like Taystee and Sophia provide some of the show’s best moments. But while Piper has her occasional flashes of connection with these inmates, for the most part they remain a source of fascination. Ultimately, they are just one element of a prison sentence that she sees as a social science experiment in which she is the chief observer.

Though her fellow inmates are complicated and nuanced characters, there is little reflection, by Piper or the show, on the cycles of poverty and violence that land many women in prison in the first place. Piper's solipsism prompts her to conclude that they are all the same, just a bunch of women who made bad choices and then got caught. But of course they are not.

“Orange” has its similarities to Kohan’s previous series, the suburban housewife turned drug dealer dramedy “Weeds,” in that both milk the tension in the story of an upper-middle-class lady gone bad. These women transgress, but never fully; the arc of most episodes revolves around watching them oscillate between bad girl -- one of “them” -- and good girl -- one of “us.” In order for this formula to appeal to viewers, the scale must always lean toward good girl, if only by a fraction. (It is my opinion that when “Weeds” went full bad girl in season 6, the show began to unravel.)

In “Orange” this tension best reveals itself in Piper’s relationship with Pennsatucky, a born-again Evangelical who becomes her fast enemy. Piper fluctuates between hatred and sympathy for this former meth addict from Appalachia, but she always maintains a degree of critical distance. At one point Piper agrees to let Pennsatucky baptize her, only to keep the peace, but then decides instead to give Pennsatucky and her followers a lecture on why she considers herself a secular humanist. In the series finale (spoiler alert) we see Pennsatucky pull Piper over to her dark side in a bloody fight scene that ends with Piper on top. This could be a sign that Piper has begun to lose this distance, physical and intellectual. We won’t know until the next season.

Maybe next year Piper will develop real relationships with the other women she encounters in prison, relationships that push her, and us, to contend with the very real differences between the Smith grad gone wild and the average inmate. This would push the show beyond a justice system version of  "slum tourism" or, worst, fashion inspiration, as it would allow these characters to rise above back-story vignettes and sideline plots and become a central part of her, and our, experience. I imagine adding some more diversity to the crew behind the camera and script might also help in bridging this distance from anthropology project to friend.

As it is now, I am left with a Piper whom I, uncomfortably, still find charming and relatable. Like her, I want to witness what life is like on the other side. And like her I know, when it's all over, I can return to my kale-eating life in Brooklyn.

Orange Is The New Black Piper Chapman The Help Tv