In the wake of the Voting Rights Act decision, there may be a new generation willing to sacrifice for civil rights 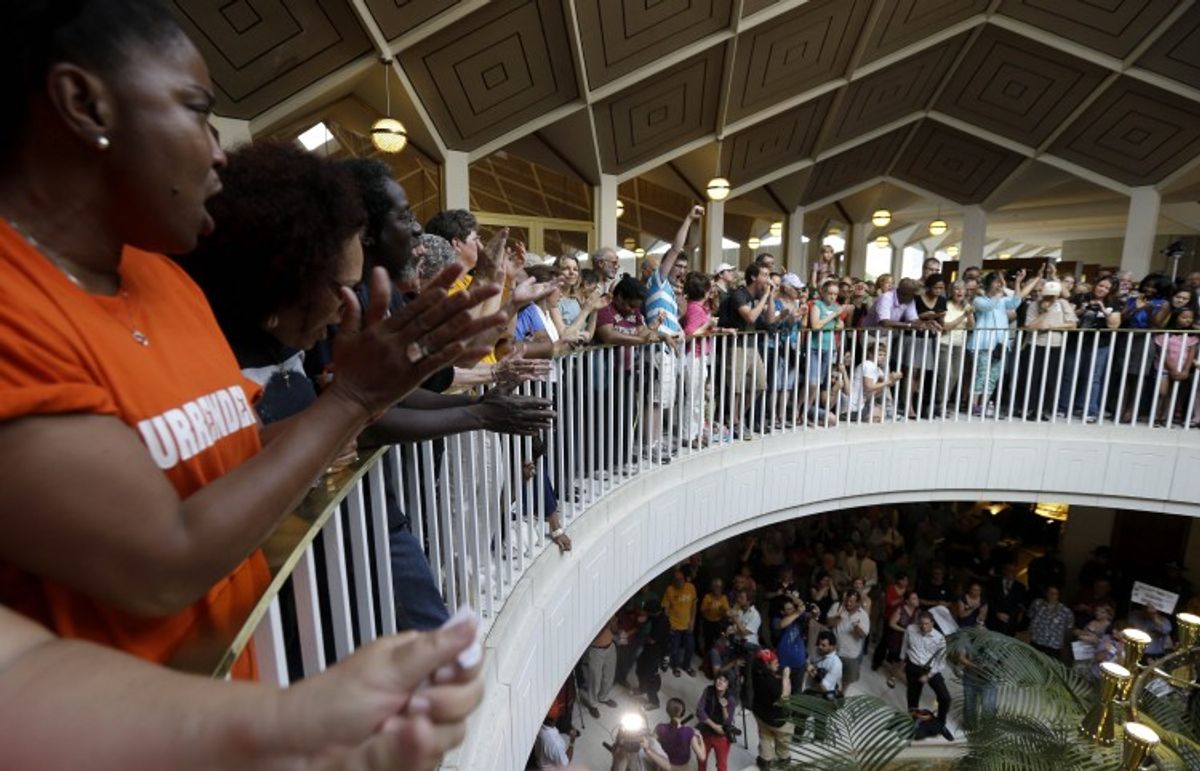 Protestors gather around the balcony overlooking the House and Senate floors during a demonstration at the state legislature in Raleigh, N.C., Monday, June 17, 2013. (AP)
--

“We must know and understand our heritage and our history,” Justice Anthony Kennedy told an audience at the Chautauqua Institution on July 29, 2013. The words sound a bit hollow coming from the man who cast the deciding vote in Shelby County v. Holder, which gutted the historic Voting Rights Act.

Yet it is hard to deny the importance of his words -- and August 6, 2013, the 48th anniversary of the signing of the act into law, provides an opportunity to reflect on our history, to determine whether it provides a guide for those who wish to undo what the court did on June 25, 2013.

To those who know the history of the African American struggle to win the right to vote, the Shelby decision was not a surprise.

That history is unique. African Americans are the only Americans to be denied the right to vote because they were defined as property, the first group of Americans to be given the vote through constitutional amendments with the passage of the 13th, 14th, and 15th amendments during and after the Civil War. For 15 precious years, they were able to vote, and did so enthusiastically. Then, when Reconstruction ended, Southern state governments stole away their right to vote. It took more than sixty years until the 1965 Voting Rights Act restored it. While most high school histories teach the expansion of voting rights as an ever forward march, for African Americans it has been two steps forward, one step back, seesawing through history.

The Voting Rights Act codified into binding, enforceable law the promises of the 14th and 15th amendments, and gave millions of African Americans the right to vote.

In the years after 1965, that step forward was continually challenged in the courts and the Congress, each time the temporary provisions of the Act came up for reauthorization. Four times, in 1970, 1975, 1982, and 2006, Congress renewed the Act by overwhelming majorities. Nevertheless, the struggle has continued, especially after the Republican Party, now the Party of the South, won control of 24 state legislatures in 2010. The result was a series of laws requiring voter ID, reducing early voting periods, obstructing the ability of organizations like the League of Women Voters to register new voters, and more.

But the greatest blow to voting rights came this summer, when five members of the Supreme Court found Section 4 of the Voting Right Act unconstitutional, ushering in a time that some pessimists are calling “Jim Crow 2.0.”

Having recently written a book on the Voting Rights Act called Bending Toward Justice: The Voting Rights and the Transformation of American Democracy, I prefer a different description: Reconstruction 3.0. The history that Justice Kennedy wants us to know and understand provides a strategy to restore the Voting Rights Act to its former glory — collective action to achieve change.

In January, 1965, Martin Luther King, Jr. launched a voting rights campaign in Selma, Alabama, at the request of city leaders who had been fighting for civil rights for decades. Local authorities led by Jim Clark, the notoriously brutal sheriff of Dallas County, attacked and jailed demonstrators, some of them children. Clark’s savagery culminated on what came to be called Bloody Sunday, March 7, 1965. Alabama State troopers and vigilantes beat and tear gassed marchers on the Edmund Pettus Bridge and pursued them as they ran for their lives. It was all caught on camera. The national uproar forced President Lyndon B. Johnson to send a strong voting rights bill to the Congress. The Voting Rights Act became law forty eight years ago today.

The Act came about not simply because of the efforts of Dr. King and President Johnson. We must not forget the extraordinary courage of so many men, women, and children, who risked everything— their jobs, their homes, and even their lives –  to win the right to vote.

Remember Selma’s teachers. At first they were reluctant to become involved in demonstrations, in part because white school board members could have them fired. But when their students asked them how they could teach civics if they could not vote, they took to the streets. On January 22, 1965, dressed as if they were going to church, they marched on the registrar’s office, waving toothbrushes, a sign that they were willing to go to jail, knowing it might cost them their jobs.

Remember too Annie Lee Cooper, a fifty-three-year-old Alabamian who had voted when she lived in Kentucky, Pennsylvania, and Ohio, but when she returned to Selma in 1962 to care for her ailing mother, discovered she had become a second-class citizen. She tried to register several times in 1964.  Her boss was so angry he fired her.

On Monday, January 25, 1965, Cooper joined the protestors in line at the courthouse, again hoping to register. Suddenly Sheriff Clark appeared and pushed Cooper with a force that almost knocked her down. “Don’t jerk me like that,” she snapped. Clark backhanded her. She reared up and punched Clark in the eye, then punched him again. Stunned, Clark fell back and yelled for help.

It took three deputies to subdue and handcuff her. Clark himself drove Cooper to jail, on the way repeatedly asking, “How much is that damned Martin Luther King paying you?” She spent eleven hours in a cell, nursing her wounds and singing spirituals while Clark drank himself into a stupor. Near midnight the jailer, fearful that the drunken sheriff might actually kill her, let her go.

Many dismiss these stories as meaningless tales from the past. Not true, says Courtney Ritter, an Alabamian who now lives in North Carolina, a state which has become a huge battleground in the new voting rights war. Earlier this summer, Mrs. Ritter joined the Moral Monday Movement, a broadly based racial and social justice movement, led by the NAACP’s Reverend William Barber. Moral Mondays are dedicated to fighting Republican efforts to suppress minority voting as well programs calling for tax cuts for the rich, the elimination of federal unemployment benefits for nearly 200,000 unemployed, and allowing people to buy guns without a background check and carry them in public places.

“I felt a moral obligation to all of those people in the civil rights movement who had put their lives and jobs on the line,” Mrs. Ritter explained in this excellent article by Ari Berman. “I wanted them to know that what they did mattered.” She joined her many colleagues in Monday protests at North Carolina’s capitol building and went proudly to jail.

Whether the Moral Monday Movement will spread to other states and create a new civil rights movement remains to be seen. What is encouraging is that there may be a new generation willing to sacrifice and struggle for voting rights, just as did the one that brought forth the Voting Rights Act.  The protestors of the Moral Monday movement, and its emerging cousins around the nation, are men and women who, in Justice Kennedy’s words, “know and understand our heritage and our history.”