The "Twin Peaks" and "Blue Velvet" mastermind has a new album, and tells Salon music and movies are all about mood 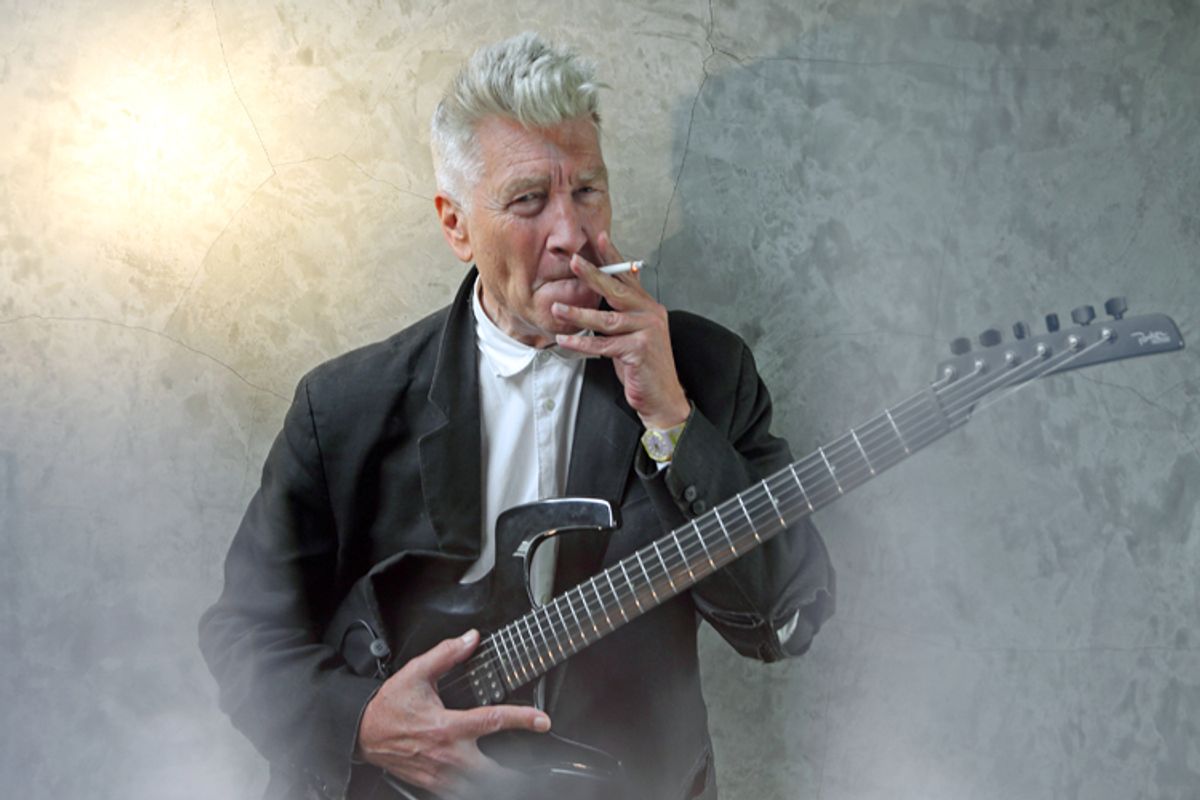 When I call David Lynch to talk about his new album, "The Big Dream," a sudden and strange rainstorm blows in. Outside one window it is pouring; through another window on the other side of the house, I can see blue. Such an odd meteorological illusion is fitting for a conversation with the master of translating the subconscious to celluloid.

I mention it to Lynch, and he sounds suddenly enthusiastic. “A summer storm?” he exclaims in his signature loud, nasal voice. “High winds! Lots of lightning! Heavy rain! Beautiful!”

Of course a summer storm would interest Lynch. Until recently, he had been posting short video updates on the weather to his website, yet because he lives in Los Angeles, every post tended to be more or less the same: sunny, breezy, warm, pleasant. Talking about the weather is dull, but David Lynch talking about the weather can be purposefully dull. He can make the banal seem epic, or at least uncanny and often unsettling. His work is famous for its everyday subject matter — small towns like Twin Peaks and Lumberton, dentistry equipment, spark plugs, summer storms — yet in his imagination the everyday becomes the backdrop for our deepest dreams and our most disturbing fears.

Lynch hasn’t made a feature film in seven years, and while there is persistent gossip that he might quit cinema or revive his previous work (most popularly “Twin Peaks,” whose rumored revival may simply be fans’ own deepest dreams), there are currently no hard plans to follow up 2006’s “Inland Empire.” Ever busy, Lynch continues to paint and draw. He makes short films and music videos, sells his own line of coffee beans, and evangelizes about transcendental meditation. Perhaps his most consuming effort, however, is music. In two years he has released two full-length albums of rambunctious and, of course, very weird blues-based rock, peppered with industrial static — like a helium-huffing Tom Waits fronting Skinny Puppy.

“The Big Dream,” his second album in two years, sounds like several decades of blues rock filtered through his distinctive aesthetic. Created with engineer/guitarist/right-hand man Dean Hurley, the songs build and unbuild blues refrains, repeating lines and ABAB rhyme schemes until they become hypnotic and dreamlike — as the title itself implies. It not only improves on 2011’s “Crazy Clown Time,” but proves an intriguing new addition to his curious canon. Speaking from his studio in L.A. — in the same house where he filmed 1997’s “Lost Highway” — Lynch held fourth on hammers, Hendrix, mosquito bites and artist’s intuition.

Even more than “Crazy Clown Time,” “The Big Dream” is a guitar album. What is your fascination with the instrument?

I guess of all the instruments in the world, the electric guitar to me is the most beautiful and most powerful, and I always say I see it as a big engine. A rough-running, smoky, high-horsepower engine. It feels that way to me. I just love it so much.

Would it be too tidy to say it functions similarly to a paintbrush or camera?

Yes, it does. There are tools that you use to create things. Ideas are the basis of all the creation, but these tools are so fantastic. This about a hammer. I’ve got a lot of hammers, but two of them are my favorite hammers. I love the feel of them and the weight of them. What they do is so fantastic. They do all kinds of things besides drive nails, so you could really get into thinking about a hammer. And then a paintbrush is another kind of tool. There are all different kinds of paintbrushes, and they’re fantastic things. Somebody invented hair at the end of a stick and it can move paint around, and so you have your favorite brushes and you have your paint and you go to work. It’s so beautiful. And then you’ve got the guitar. And it’s a tool. You fire that puppy up and use it to create these things that come out of it. It’s a really, really beautiful tool.

The textures of the guitars on this album remind me of brushwork in a painting. It varies from one moment to the next — sometimes thickly applied, other times nearly invisible.

In painting, they say you could feather that. You use the same term in music. I say, “Dean, feather that out a little bit.” It’s about these transitions and the way a thing appears, how loud it gets, how long it stays that way, what kind of effects you have on it. Like if you can put a varnish on it: You could put a matte varnish on it, or whatever. And then you fade it out — where it fades, how long it fades. These kinds of things are things that happen in all the mediums.

Who are some of your own guitar heroes?

Jimi Hendrix is No. 1. But right alongside of him is Billy Gibbons of ZZ Top. And I think a guitar player that’s not really talked about much is Mark Knopfler. I think that guy is an unreal great player. Unbelievably great. Let’s see. I like John Lee Hooker’s cooking boogie guitar, and I like the way guitars are used in Elvis’ music. There are so many great, great guitar players, but I guess Hendrix is maybe the one who really gets that thing working.

Why did you decide to tackle Bob Dylan’s “The Ballad of Hollis Brown”?

Dean Hurley. Dean thought it would be a good idea to do that song, and I think it’s a great idea. One time Dean and I were going through the album, and Dean didn’t play “The Ballad of Hollis Brown.” We both felt like something was missing, and then we remembered that we didn’t play that song. I think it’s a very important texture for the album, number one, and number two, with the financial crises and people out of work and hard up for money, I think it’s a very timely song.

It sounds like Dean Hurley was a very crucial presence on the album.

It’s not just me playing on these songs. It’s me and Dean playing. Dean is a very special person. He’s a great engineer and he’s got a great sensibility for music. He’s a very creative individual. He makes a great musical partner. There was an engineer who worked here before, and when he left, a friend of mine who’s a sound effects mixer for cinema recommended Dean. So I got lucky. Super lucky.

“The Big Dream” is strongly rooted in the blues, and those blues repetitions are very hypnotic — almost dreamlike.

We always say rock 'n' roll is “blues-based.” It’s not like it’s a hard and fast rule that it’s all got to be the blues, but the basis of it is that. Music can conjure a kind of dream. Everybody knows that. All these mediums are infinitely deep. You start one place and you hopefully progress.

It sounds like making music is a process of experimentation and discovery then, instead of an attempt to create sounds you hear in your head.

Exactly right. Sometimes Dean and I have no idea, but sometimes we have an idea that gets it started in a kind of a jam. We jam along and it’s usually very, very bad. And then it might get a little bit better. And then sometimes we catch something. That’s where the magic comes. I don’t know how it happens, but that’s what you’re experimenting for — to get something that lights your fire. Then you know what to do.

How was that process of exploration different from the soundtrack work you’ve done in the past, like for “Eraserhead” or “Inland Empire”?

It’s different in a way, because many times in a film you have the image before the sounds. So, through experimentation you find the sounds that marry to that image and make that image feel correct. There are abstract sounds that approach music. They’re not music, but they create a mood. And then there’s music. It’s all these things you experiment with. You could say that experimenting is action and reaction. You try something. You create something and you say no no no. But then you go and find something that makes you say yes yes yes.

You’ve said in the past that when you listen to music, you can’t do anything else. You don’t paint or work. You simply listen.

A lot of painters listen to music, I think, while they paint. But I hate to do that. It’s a horror. I can’t really listen to the music. I’m not really concentrating on it, and I’m not really concentrating on the painting. They say those things divide the mind. So, when you’re listening to music, you try to really listen to the music and nothing else. That’s to me the best way. And when you’re working in the shop, you concentrate on that.

From the album title to the lyrics about star dream girls and wishing well, you foreground a lot of dreamlike imagery on this album. That puts “The Big Dream” right in line with a lot of your movies.

I like mood. A certain mood. And I also like dream logic. It doesn’t really make any sense. It’s more like a very strange poem. It doesn’t make sense if you look at it one way, but if you look at it another way, it’s still abstract but it makes sense. Cinema can say these things, and music can say these things, and music can create a mood and a feel. Every musician tries to find a thing that feels good to them, and they keep going until it feels good.

Do these songs feel good to you now, or are you still moving toward feeling good about them?

All the songs we felt good about. That’s really important. You work on something until it feels correct, and then it’s done. But nothing is ever perfect. It’s like a very bad mosquito bite. You put some calamine lotion on it, and it stops itching. But pretty soon it’ll start itching again. You’re motivated to keep scratching at it. Every single medium, you know when a thing is done. How do you know? They say it’s gotta be intuition. You use that faculty to tell when something is not right and when it is right. It’s the only thing you’ve got.

Do you revisit your own music or rewatch your own movies. Do you live with them, find new things in them over time?

I’ve listened to the music and I like listening to it. I really like listening to it. When my son Riley was 14, we watched all of my films together. I have this thing where sometimes it’s very good to go back and visit old work. You can say, “Oh I was into that then. That could work now.” You might get some ideas for what you’re working on now. But the real motivation is to go forward into the great unknown.