No, it's not enough to just show up. The First Man of hip-hop has to stop sipping the post-racial Kool-Aid 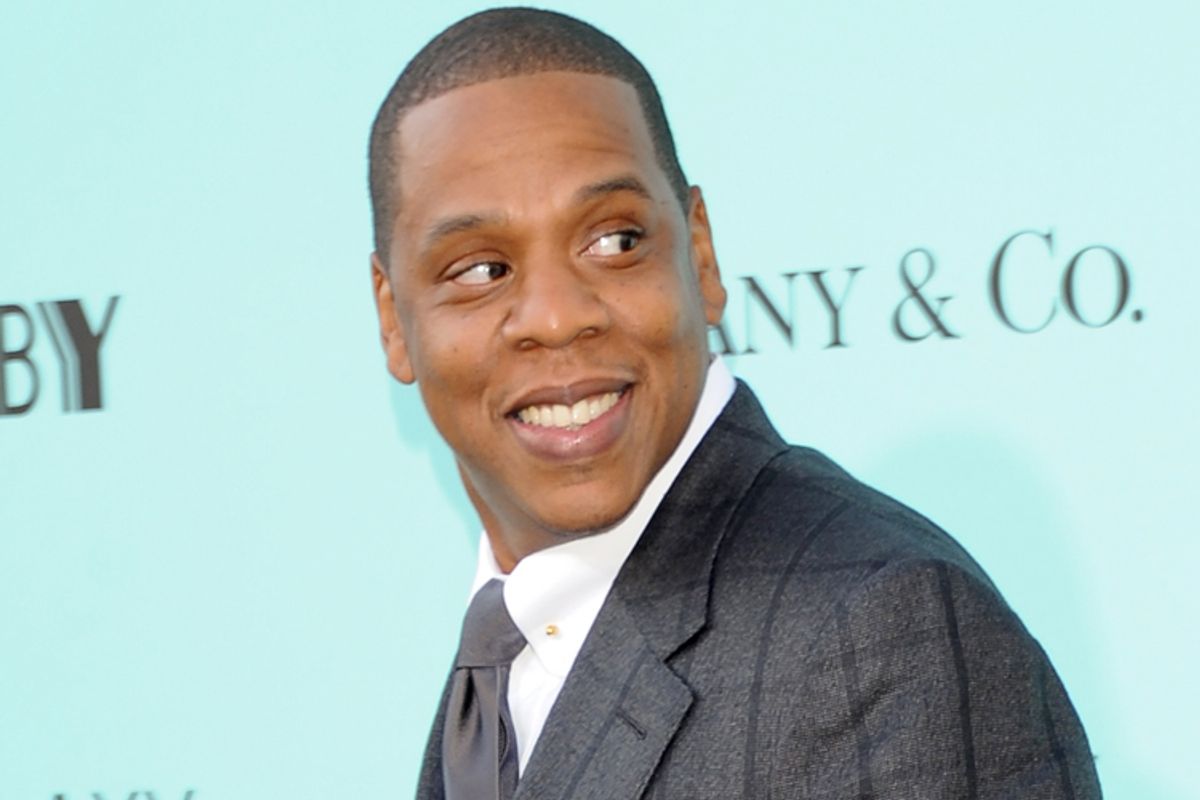 It is still too soon to tell what the political legacy of the hip-hop generation will be. But if our stance toward our past leads us in this moment to conclude, as Jay Z has recently done, that our mere presence “is charity,” then we are off to an incredibly bad start.

In response to Harry Belafonte’s call for the more prominent members of the hip-hop community – folks like Jay Z and wife Beyoncé -- to step up and use their considerable cultural and economic power to influence the political questions of our times, Jay Z has asked us to accept his view that his “presence is charity.”

Frankly, the hubris, arrogance and myopia of Jay’s statement leave me scratching my head. I’d venture to say that Jay Z is one of the smartest, most insightful cats in the game. He is seriously a very intelligent dude.

Having listened to his song “Nickels and Dimes” on the "Magna Carta/Holy Grail" album, which Jay Z suggests is about his own survivor’s guilt at making it, I am left wondering how a guy who evinces the ability to be so self-reflective about his own social position can respond so flippantly and disrespectfully to Harry Belafonte -- particularly within an African-American culture that places the highest degree of importance on having respect for one’s elders. Should Mr. Belafonte really be the subject of a dis track? (“I’m just trying to find common ground/ ’fore Mr. Belafonte come and chop a nigga down/ Mr. Day-O Major Fail/ Respect these youngin’s boy, it’s my time now.”)

Referring to an elder African-American man as a “boy” is the only major fail that I can see here, especially when one is well aware of how egregious such a disrespectful act is in African-American communities.

Jay Z himself professes a belief in showing respect for one’s elders. In a recent interview with Elliot Wilson of RapRadar, Jay spoke quite insightfully about the need for young rappers in the game to move through the world in a spirit of both respect for and competition with those who had come before. That kind of relationship to the past, as a thing to be respected, built upon and exceeded, is part and parcel of both a hip-hop aesthetic and ethic. It is this creative and productive relationship to the past that has at various points made hip-hop such a forward-looking genre. Aesthetically and ethically, Jay retains this sense of being forward-looking.

Yet when it comes to thinking about the political potential of hip-hop, Jay becomes mucked and mired in the very kind of presentist thinking that not only stunts black politics but also frankly has become the albatross of hip-hop culture. Presentism defines reality according to the tyrannical urgency of now and confuses us into thinking that merely showing up is enough. That it is more than enough. That we are doing the world a favor. Presentism is the playground of the ego. It allows us to be unconcerned with past lessons or future consequences. Presentism in hip-hop culture has led to a revolving door of one-hit wonders. Surely a longer view is required for our politics.

Even though Jay speaks in his interview with Wilson of trying to expand the emotional capacity of hip-hop to handle something as simple as a more complex representation of familial relationships – marriage and fatherhood, for instance — he seems to think of black politics with a kind of wide-eyed, childlike wonder.

It seriously baffles the mind.

For instance, though he notes that the Zimmerman verdict caused him to lose sleep for two nights straight because of his shock at the “blatant” show of racism, he ultimately concludes that though there is still a “bit of racism in America,” “this generation don’t see color in that way,” the way the “old guard” does.

The basis for the political and cultural bromance between Jay Z and President Obama emerges more clearly here, because the president also proudly proclaimed in his Trayvon Martin speech that the younger generation is so “much better than us” on these issues. The truth of such saccharine sentiments is belied most immediately by the fact that George Zimmerman himself, at 29 years of age, is a member of the millennial generation.

Both the president and the First Man of hip-hop have to stop sipping the post-racial Kool-Aid. Because despite their acknowledgment of the persistence of racism, these two are still deeply invested in a narrative of forward racial progress, despite all evidence to the contrary.

In his autobiography, "Decoded," Jay argued that “hip-hop has always been a powerful force in changing the way people think about race, for better or worse.”  “Hip-hop,” he goes on to say, “gave a generation a common ground that didn’t require either race to lose anything; everyone gained.”

As a veritable member of the 1 percent, Jay Z and his family may have gained a lot and lost very little. But for the 99 percent, the converse is true. African-American families have lost over half of our collective net wealth since the economic downturn of 2008. In this era of downward mobility, Jay Z’s survivor’s guilt is no more helpful than liberal white guilt is.

Searching for common ground, as Jay claims to be doing on the “Nickels and Dimes” track, is laudable, but one cannot will it to be so.

That Miley Cyrus can be found enthusiastically twerking -- as Jay takes care to both note and seemingly celebrate as evidence of progress on "MCHG" -- on this hastily cobbled together common ground is an inane distraction from the fact that the foundation is crumbling and the ground is receding.

Jay absolutely believes in the power of hip-hop to make a substantive difference artistically, materially and politically. This is why he has attempted over the last decade – with varying degrees of success – to offer to hip-hop a notion of what Grown Black Manhood might look like.

This is to be applauded.

But hip-hop’s political sensibilities also have to grow up, too. We cannot be overly enthralled by the symbolic. Statements like “My presence is charity, just like Obama’s … the hope he provides … is enough” are not acceptable.

Neither Jay nor the president has responded well to being called out by their elders. They have met legitimate critiques with ego-driven resistance, worrying more about how their responses will affect their multicultural street cred. Perhaps as fatherless sons in a generation marked by absentee patriarchs, theirs is a healthy skepticism of the kind of civic and cultural fathering portended by elder black statesmen calling them on their missteps.

But we all have something to lose when they refuse to listen to reason.

Though I, too, found the president’s remarks on Trayvon Martin to be moving, powerful and important, we can’t lose sight of the bigger picture. Hope is not enough. A compelling narrative of African-American exceptionalism is not enough. The fact that the presence of a black president and a black attorney general could make no material difference to the reality of a young black male teen walking down his street in Florida demonstrate the limits of the symbolic.

This is why no one gets a gold star simply for showing up. To act as though you should suggests that not showing up is a legitimate option. But in political times like these, truancy is child’s play.