I never thought this could happen to a child so young, in a body-positive household like ours. Boy, was I wrong 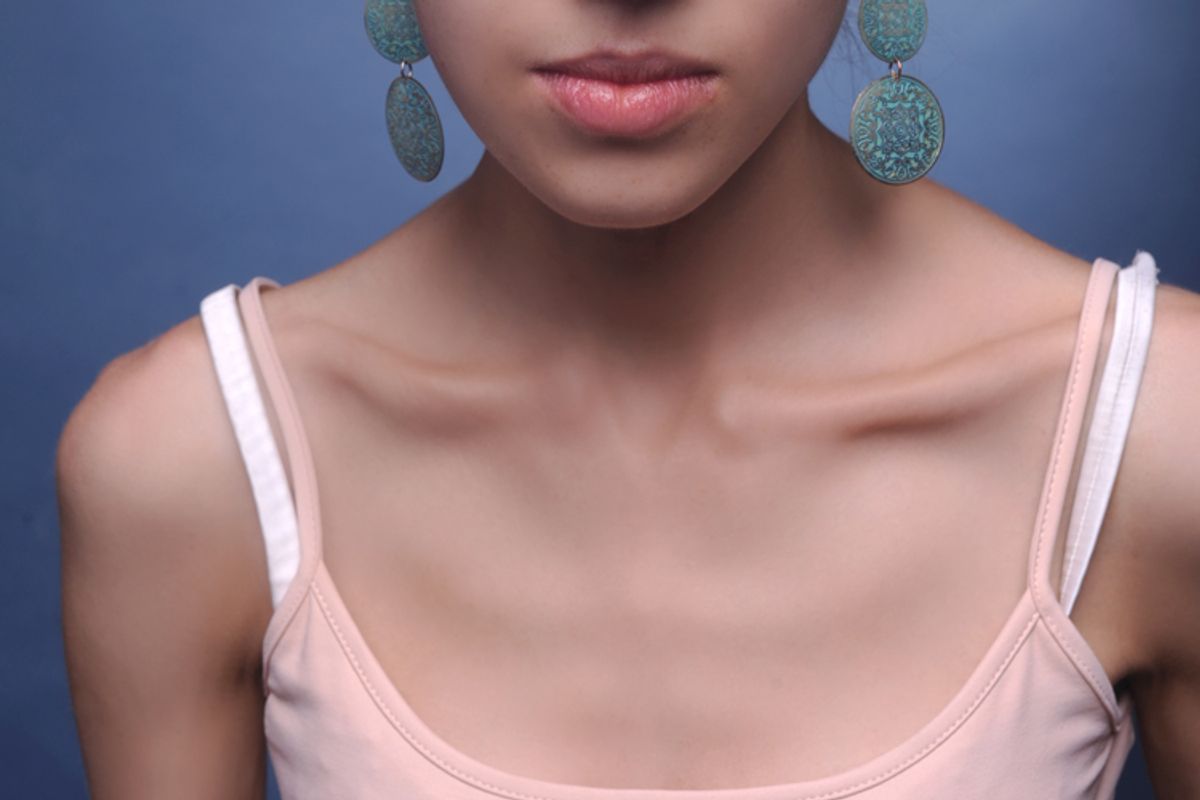 My 9-year-old daughter was starving herself to death. And somehow, God forgive me, I didn’t notice until it was almost too late.

We were busy running from soccer to swim lessons to play dates. But that’s no excuse. The mere idea of a fourth-grader becoming anorexic was so foreign, so wild and so far-fetched, that it never crossed my mind.

My daughter had always been a picky eater and small for her age — less than six pounds at birth. She didn’t like to eat much, and I didn’t worry about it.

Then one day she asked for help with her sunscreen. She walked up, wearing her purple-and-blue swimsuit, and I squirted a blob of white lotion onto my palms and spread it across her back and shoulders. My fingers felt what had somehow escaped my eyes — pointy bones protruding like little bird wings. Over the bones stretched a thin layer of skin.

Slowly, the pieces fell into place: odd comments over the summer that I had dismissed, thinking if I didn’t make a big deal out of them, they would pass like so many other random fears and concerns that my children had.

My response? It was so absurd I laughed and told her if anything she probably didn’t eat enough.

I also didn’t pay attention when she lost interest in foods she had once loved. I thought it was just a phase. In her short nine years, my complex daughter had brought up unusual fears and concerns. Usually if I didn’t make a big deal — took it in stride and gave her a little reassurance — it went away.

This time, it didn’t.

When the scale showed she was only 50 pounds — seven pounds less than she’d been during a visit only a few months before -- her pediatrician referred us to a children’s hospital. There, they diagnosed her as malnourished and suffering from an eating disorder.

My husband and I were stunned — and a little suspicious. She was only in fourth grade, for crying out loud. Didn’t this only happen to teenage girls?

Even so, in my eyes, we seemed the least likely people to have a child with an eating disorder. The word “diet” was pretty much banned from the moment I gave birth to a girl. Same for “skinny.” Until my daughter said it, the “F” word — fat — was not heard in our house.

We don’t subscribe to fashion magazines and carefully monitor what they watch on TV. Hell, our kids didn’t even know there were other channels besides PBS Kids until recently.

I also foolishly thought -- in a manner that now seems embarrassingly smug -- that by never making my kids “clean their plates” like other parents, I was preventing future issues with food. But that effort didn’t make much difference at all, it turns out.

The doctor has told me and my husband, oh I don’t know, maybe 25 times, that it is not our fault. But that mother’s guilt has a way of creeping right in there. She also said there’s no prescribed method of parenting that can prevent a kid from becoming anorexic.

Just like there is no prescribed behavior that guarantees a kid will become anorexic. The only thing people know for sure is that some kids are predisposed to be susceptible to this disorder.

And truly, I don’t care where it came from, as long as my daughter gets over it.

She’s getting there. We started making weekly visits to Children’s Hospital. Along with therapy, those visits included weigh-ins and blood pressure monitoring. Apparently, when you starve yourself, one of the red flag danger signs is low blood pressure. If it’s too low, you’ll end up in the hospital with a feeding tube and IV.

That image scared the crap out of our daughter. And us.

School was about to start, so we were also directed to bring the school nurse into the plan. At that point, I hadn’t really told anyone besides my husband what was going on. So when I walked into the nurse’s office with a letter from Children’s Hospital, I was nervous but not unduly upset.

However, as soon as the words “eating disorder” came out of my mouth, I surprised myself (and the nurse) by bursting into tears and found myself wiping my tears and snot off a perfect stranger’s shoulder.

The nurse organized a plan where staff members covertly monitored my daughter’s eating at school. None of her classmates would know it was happening. But this also gave the doctor — and us — a secret weapon: If she didn’t eat her lunch, her mother (me) would sit at the school lunch table with her. And her friends. Every day. Needless to say, she ate her lunch.

That was one of the easy battles. Some were much trickier. Every night, we went to bed exhausted from trying to get our increasingly furious kid to take yet another bite at the dinner table. We coaxed her along in the “dolphin” method we’d learned. (Swimming along beside her and gently nudging her in the right direction, as opposed to the “rhino” that bullies the kid into eating or the “kangaroo,” which enables the kid along the road to starvation.) No, we had to be the dolphin.

Our natural inclination was to say, “Eat your freaking food or the wrath of your parents will rain down on your head with a vengeance you’ve never imagined in your worst nightmares.” Obviously that wouldn’t work.

As my husband said when we first found out: “What’s the big deal? She just needs to eat.”

If only it were so simple. We soon learned that nothing about an eating disorder was rational. And that the more malnourished our daughter became, the more irrationally she behaved. In other words, the voice telling her not to eat was the most powerful thing in her world. In order for her brain to work normally again, she had to gain weight. In order to do that, she needed to eat. A lot.

So instead of threatening her within an inch of her life, we trained ourselves to repeat inane “dolphin” phrases, such as, “We know it’s hard, but you can do it. Finish your dinner.”

One week during therapy we were told to bring a picnic dinner to the hospital so the doctor could observe the meal. A complete waste of time, I thought. I was convinced that under the spotlight my daughter would act like a perfect little angel and eat every bite.

Instead, during that meal, my daughter gave the girl in “The Exorcist” a run for her money. She glared. She pouted. She ranted. She raved. She acted possessed -- the same way she sometimes acted during dinner at home.

The therapist reassured us it wasn’t really our daughter. It was the “eating disorder,” which she said had a life of its own. Now, that’s not something any parent wants to try to wrap their head around.

But slowly our “dolphin” efforts began to have positive effect. We refused to talk about her food or argue with her about what she had to eat. She was only allowed to join in the dinner conversation if she was also taking a bite every few sentences. We also offered rewards. Every time she balked, we reminded her that the fate of a coveted sleepover hung in the balance.

Slowly, it stopped being a nightly battle and we leaned back and breathed a sigh of relief. But nothing is ever so easy, is it?

We hit another pothole in the road. My daughter began disappearing into her room, blasting her music and then coming out sweating. She was “Irish dancing” (basically stomping around like a crazy lady for an hour straight). She admitted trying to exercise away the food she had eaten.

I should also point out here that my daughter had no clue that some kids vomit to get rid of food in their stomach and there’s no way in hell she’s going to find out from me.

Now, nearly a year later, after intensive therapy, my daughter is in the moderately healthy weight range, which is still in the 5th percentile. In other words, she’s not malnourished anymore.

I don’t know if the struggle will ever be over. But I do know how to go to war against the eating disorder now. Meanwhile, I try furiously to hide my gratefulness, relief and joy when my daughter walks into the kitchen and says these simple words that parents around the world hear every day and yet, take for granted, like I will never do:

Kristi Belcamino is a writer, artist and photographer. Her first novel, “Blessed are the Dead,” was inspired by her dealings with a serial killer during her life as a Bay Area crime reporter.