The iceberg just rescued the Titanic 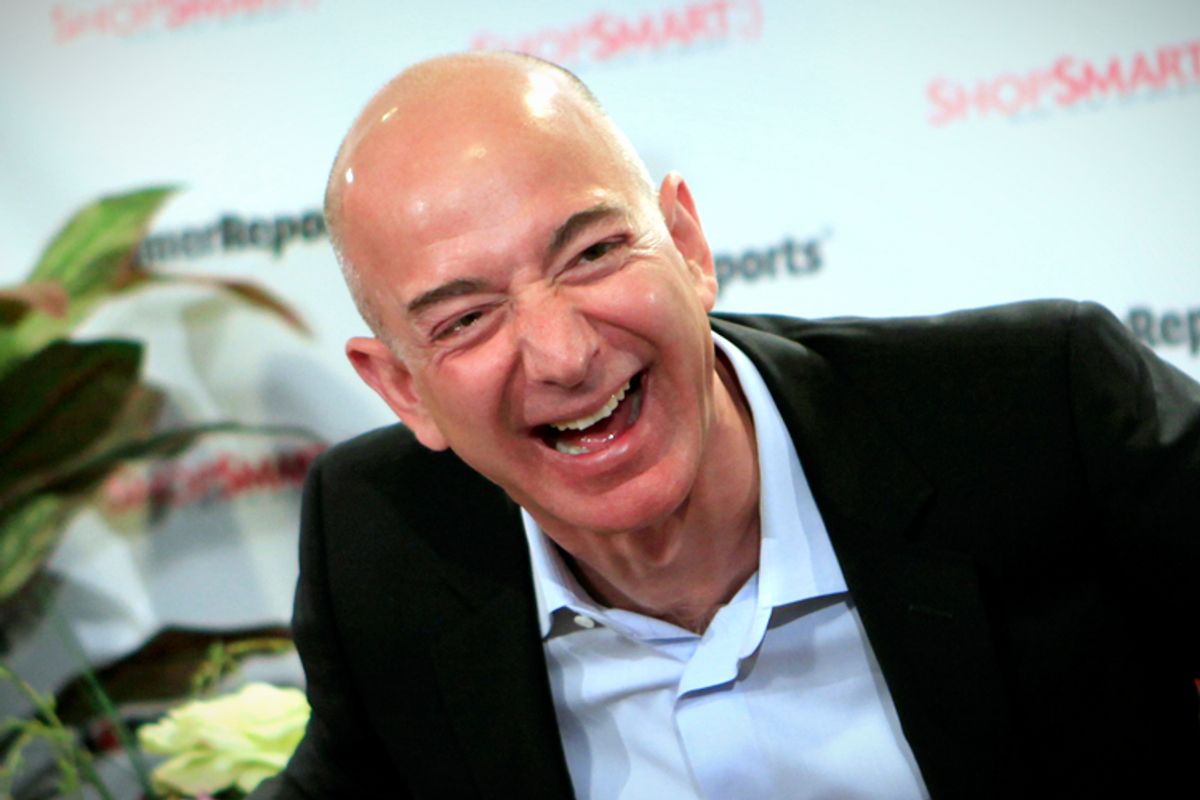 For Jeff Bezos, it was pocket change. With an estimated personal net worth of $23.2 billion, $250 million for the Washington Post isn't even blink-worthy. In the circles Bezos runs in, that kind of price tag measures a minor acquisition -- it's a quarter of what Facebook paid for Instagram or Yahoo paid for Tumblr. As was swiftly noted on Twitter, in terms of a percentage of his net worth, Bezos paid less for the Washington Post than Sean Parker paid for his redwood grove wedding.

But for the journalism business, to call this an earthquake is like, well, it's like calling Amazon just another bookstore. The Washington Post is one of the premier newspapers in the English-speaking world: the most important publication in the capital of the planet's greatest superpower. The symbolic importance of the Bezos acquisition is impossible to escape. No single company embodies the disruptive, brick-and-mortar-smashing force of the Internet more fully than Amazon. Now we've come full circle. The iceberg just rescued the Titanic. After grinding the newspaper industry beneath its steel-tipped boots, the Internet suddenly turned all sweet and sugar daddy.

Like everyone else who makes a living from his words, I'm still in shock. But maybe all of us ink-stained wretches currently catching flies in our gaping maws should just say thank you.

Yes. Thank you, Jeff Bezos. Because there are good reasons to believe that this is not the end of the world for the Washington Post -- and maybe, just maybe, the beginning of a rosier future. Think about it: Jeff Bezos could provide the Post with new stability, he is well-established as someone who doesn't mind losing gobs of money, and, well, he seems to like both books and newspapers.

Could be worse, huh? Rupert Murdoch or Sam Zell could have bought the Post and imposed a particular political ideology or brought in the cost-cutting chain saws. It wouldn't take much to disembowel the proud history of the paper that broke Watergate wide open and (together with the New York Times) defied the U.S. government on the Pentagon Papers. Jeff Bezos is on record as saying the responsibility of a newspaper is to its readers, and not its owners. Let's try taking him at his word.

In the immediate aftermath of the Bezos news, there was some hand-wringing on Twitter as to how this left only the New York Times as a great family-controlled newspaper. But wait a second. Jeff Bezos has a family! He's already got four kids; three boys and a girl who will never lack for anything. Worried about the future? Jeff Bezos is the patriarch of a family that won't be under any financial pressure to sell off the Washington Post for centuries. Arthur Sulzberger, eat your heart out. There is a new dynasty in town.

Extra, extra! Nothing protects a newspaper better than a benevolent dictator and his or her trust-fund-enjoying descendants. If another publicly traded company had bought the Post, or some sleazy leveraged-buyout operator forced to pile up a ton of expensive debt, the Post's employees and readers would be in a much more vulnerable position.

Even better, Bezos is a man who knows how to lose money. Amazon did not become profitable for seven years after its IPO. Just last year, Amazon lost $39 million. Amusingly, the most recent quarterly filings for both Amazon and the Washington Post Co. have WaPo making a profit of $5 million on total sales of $959 million while Amazon lost $7 million on total revenue of $12.8 billion. (Of course, the Washington Post's profits presumably are mostly generated by its educational testing subsidiary Kaplan, which is not part of the sale.)

One can well wonder how Jeff Bezos managed to become a billionaire 20 times over while presiding over a company that has lost money in more years than it has made money. The standard explanation for why Wall Street hasn't left his company riddled with bullets on the stock exchange floor is that Amazon's losses stem from Bezos' determination to invest heavily in the future. In the long run, Wall Street seems to think, we will all buy everything from Amazon -- and that should earn the company a tidy profit ... in the long run.

Yeah, yeah, but to paraphrase Keynes, in the long run we're all former employees of shuttered brick-and-mortar bookstores and employees of publishing houses who lose money on every Amazon sale and writers who will never earn out our piddling advances because Amazon has made it impossible for anyone but Amazon to make money from publishing. In other words, we're all dead. But the point is this. Love him or hate him, Jeff Bezos has never paid even the semblance of lip service to Wall Street's insistence on pumped-up quarterly earnings statements. That's the kind of owner today's newspaper desperately needs? He can wait out a wrenching period of technological transition longer than anyone this side of Bill Gates or Warren Buffett.

And come on, the guy sells a lot of books, right? According to the Post's own coverage of the sale, we are told that Bezos likes newspapers -- he reads the Post, the Wall Street Journal and the New York Times. He's a huge fan of the printed word! OK, maybe "printed" is the wrong word to describe the kinds of words that Mr. Kindle is a fan of, but still -- he understands that readers gotta read. So why not just keep a newspaper around for kicks?

But the most inspiring aspect to Jeff Bezos' most excellent Internet adventure is the example he sets for all the other moguls who have built fortunes on top of the "disruption" of everything that came before. Because, let's be frank, Bezos owed us this one. One year before Jeff Bezos founded Amazon in 1994, the New York Times bought the Boston Globe for $1.1 billion. This week, the New York Times sold the Boston Globe to another very rich man, Red Sox owner John Henry, for $70 million.

It's not too much of a stretch to argue that the drastic change in valuations is Jeff Bezos' fault. More powerfully than any other early Internet pioneer, Amazon demonstrated the incredible commercial potential of the Internet. Oh wait, you mean I can order any book in the world and it will be in my mailbox in a couple of days? Hell yeah, I'll point and click. Every other disruptive innovation that has poured out of Silicon Valley has been chasing Amazon's example.

So now Bezos is giving a little bit back, putting some money down to prop up a cultural institution that has provided great value for many decades, and maybe, just maybe, with a little tinkering, a little more innovation, a little steadfastness and a whole lot more capital investment, could keep shining its light for a few decades more. Let's see other people follow his example! The Carnegies and Mellons and Fords and Rockefellers left us a great cultural heritage. Bill Gates, maybe you could buy a big music recording studio? Mark Zuckerberg, why not get Random House back from Bertelsmann. Internet moguls to the rescue! You know you want to.

No doubt about it, Jeff Bezos buying the Washington Post is a stunner. My jaw is still aching from where it hit the floor. But I also kind of love the audacious robber-baron feel to it -- I had no idea tycoons like that still walked the earth. I want to see what happens next. For now, a great paper lives to see another day. I've bought a lot of books from Amazon. I approve this purchase.