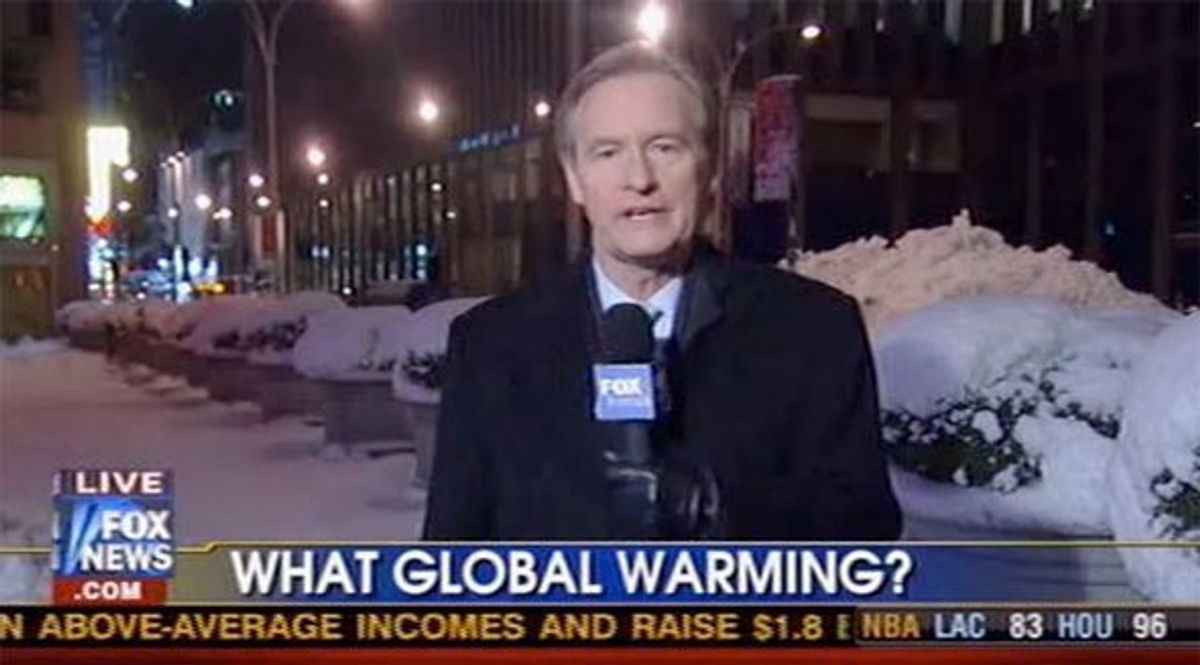 Now that science has more or less agreed that human-caused climate change is happening, some are devoting their efforts to figuring out how it's possible that people can remain skeptics. Plenty has been written about the corrupting influence of conservative media, but a new study from researchers at the University of Arizona, George Mason, American University and Yale looks more closely at exactly how such programs manage to fuel their audiences' denial.

Predictably, they found that the more exposed Americans are to conservative media, the less certain they become that climate change is happening. The problem, they discovered, isn't just that programs like Fox News are sowing the seeds of doubt about climate change, it's that they're decreasing people's trust in the scientists who say it's happening. That's 97 percent of them, for the record.

The researchers took a nationally representative sample of Americans who were quizzed, by phone, on their media diets and their belief in climate change on a scale from 0 (extremely sure global warming is not happening) to 8. They controlled for variables like race, income and education level. Almost 2,500 people were surveyed in 2008; 1,036 were reinterviewed in 2011. They also analyzed the climate change coverage across Fox News, ABC, CBS, NBC, MSNBC, CNN, NPR, the New York Times and the Wall Street Journal during that period.

The study's lead author, Jay Hmielowski, explained in an email that his team found a 13 percent decrease in the amount of trust between people who do not watch or listen to Fox News or Rush Limbaugh and the programs' most loyal devotees. Those who watched or listened to left-leaning and mainstream news sources -- CNN, MSNBC, NPR and network news -- experienced the opposite effect: They were more likely to trust scientists and thus be more certain that global warming is happening. The researchers were able to show that this influence occurs over time, as the years of tuning in accumulate.

"I would say that our findings show that the attack on science seems to be working," said Hmielowski.

How do Rush and friends do it? The study's authors break down research demonstrating how conservative news outlets claim there's a lack of scientific consensus about the reality of climate change. Studies have found, for example, that Fox News airs more stories about evidence that appears to disprove global warming or featuring climate change skeptics than stories that accept the reality of climate change. In so doing, write the authors, they "have served to marginalize scientists in general and climate scientists in particular." Both liberal outlets like MSNBC and mainstream channels like CNN are much more likely to emphasize that global warming is real and caused by human activity.

Conservative news programs, the authors hypothesize, create a rapport with their viewers based on a shared ideology. "Because people’s knowledge of most scientific issues, including climate change, is relatively limited," they write, "the salient values used to judge trustworthiness are likely to be general rather than specific (i.e. based on agreement and sympathy rather than on carefully reasoned arguments or direct knowledge)."

The researchers don't seem to be giving members of the general public a lot of credit for our ability to digest information or form our own opinions. But, they explain, climate change is complex and difficult to directly witness. The news media, on the other hand, speaks our language, and is a much more pervasive force in our daily lives. Is it any wonder that it's able to have such a salient effect on our biases?