The president talked Snowden, surveillance and his "bro-mance" with John McCain 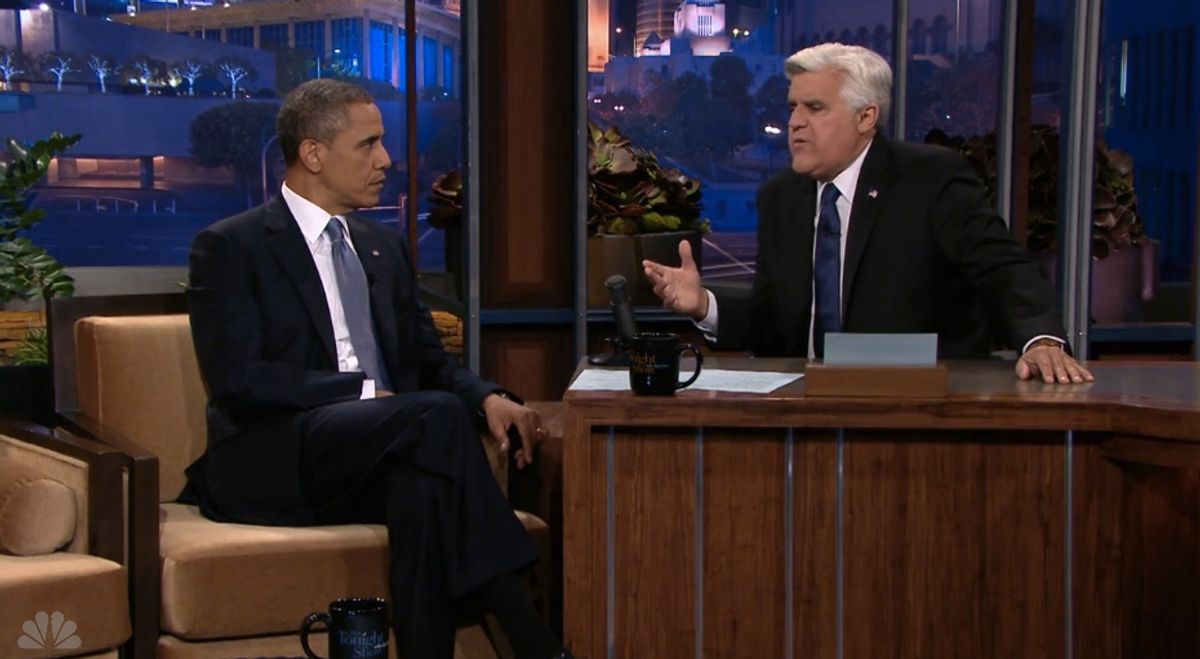 In a 40-minute sit-down on "The Tonight Show," President Obama and Jay Leno addressed a number of issues, from Edward Snowden to LGBT rights to Hillary Clinton. Here are the highlights:

- On his speech addressing George Zimmerman's acquittal in the shooting of Trayvon Martin:

Well, I think all of us were troubled by what happened.  And any of us who were parents can imagine the heartache that those parents went through.  It doesn’t mean that Trayvon was a perfect kid -- none of us were.  We were talking offstage -- when you’re a teenager, especially a teenage boy, you’re going to mess up, and you won’t always have the best judgment.  But what I think all of us agree to is, is that we should have a criminal justice system that’s fair, that’s just.  And what I wanted to try to explain was why this was a particularly sensitive topic for African-American families, because a lot of people who have sons know the experience they had of being followed or being viewed suspiciously.

- On whether he caught Hillary Clinton "measuring the drapes" when they had lunch together at the White House:

No.  Keep in mind, she’s been there before ... So she doesn’t have to measure them.

- On whether Edward Snowden is a whistle-blower or a traitor, the president dodged:

Well, we don’t know yet exactly what he did, other than what he’s said on the Internet, and it’s important for me not to prejudge something ... Hopefully, at some point he’ll go to trial and he will have a lawyer and due process, and we can make those decisions.

We don't have a domestic spying program.  What we do have are some mechanisms where we can track a phone number or an email address that we know is connected to some sort of terrorist threat.  And that information is useful.  But what I've said before I want to make sure I repeat, and that is we should be skeptical about the potential encroachments on privacy.  None of the revelations show that government has actually abused these powers, but they're pretty significant powers.

- On John McCain, Leno asked the president, "Is it me, or do I see kind of bro-mance with you and John McCain?":

That's how a classic romantic comedy goes, right?  Initially you’re not getting along, and then you keep on bumping into each other ... John McCain and I have a number of philosophical differences, but he is a person of integrity.  He is willing to say things regardless of the politics.  The fact that he worked hard with a group of Democratic and Republican senators on immigration reform; they passed a bill in the Senate that will make sure that folks who are here illegally have to pay back-taxes and pay a penalty and get to the back of the line, but over time have a pathway to citizenship, and make sure that we’re strengthening our borders.  He went ahead and passed that even though there are some questions in his own party.

Obama also addressed Russia's recent crackdown on gays and lesbians, telling Leno he has “no patience” for countries that “treat gays or lesbians or transgender persons in ways that intimidate them or are harmful to them.” Read more on those comments here.