Thousands of protesters from labor groups, unions and community organizations to descend on the Chicago convention 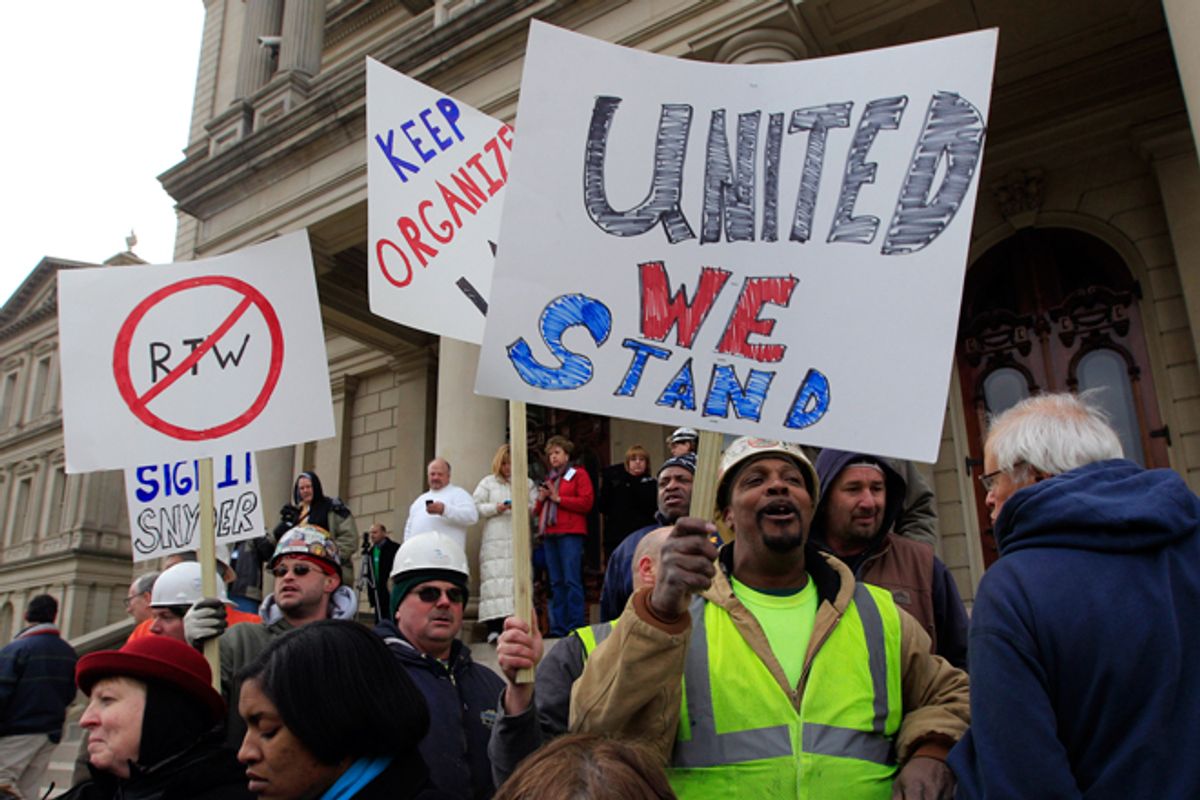 For many liberal and left political groups, the American Legislative Exchange Council (ALEC) has come to symbolize everything wrong with U.S. politics. The lobbying, bill-writing group bring together big industry interests with state politicians to both draft and push forward versions of their cookie-cutter legislation nationwide, with a conservative, neoliberal agenda towards privatization and the decimation of labor rights.

Little surprise, then, that when ALEC meets for its 40th national conference on Aug. 7th - 9th, thousands of union organizers, workers and community groups plan to meet them there in protest. Indeed, as a taster for things to come, on Monday six protesters were arrested at the Palmer House Hilton in Chicago, when a small group of protesters in the convention hotel lobby made vocal their displeasure at ALEC's presence. As Micah Uetricht reported for the Nation:

A group of several dozen hoodie-wearing protesters staged a die-in at the hotel this morning, noting the group’s role in spreading “Stand Your Ground” laws that helped protect George Zimmerman after shooting unarmed teenager Trayvon Martin, a mass rally has been called for Thursday organized by the Chicago Federation of Labor, and other actions are expected throughout the week.

Targeting ALEC would certainly be in labor’s self-interest: anti-worker and anti-union legislation has been a central focus of the group, with model legislation that includes right-to-work laws, repealing the minimum wage and opposing future minimum wage increases, and other pro-business labor laws. Their fingerprints have been on a number of high-profile legislative battles on labor issues in recent years, including Wisconsin Republican Gov. Scott Walker’s 2011 Budget Repair Bill that led to the state capitol’s occupation, Michigan Republican Gov. Rick Snyder’s right-to-work legislation late last year, and anti-worker (as well as anti-choice) legislation in North Carolina behind the state’s Moral Mondays protests.

In 2013 alone, at least 117 bills resembling the group’s “model bills” on worker compensation and organizing rights have been introduced in state legislatures around the country. Their bills attacking public sector unions have caught the attention of the American Federation of State, Municipal, and County Employees (AFSCME), who have decried the organization in the past and are also encouraging members members to join the protests.

In a city where thousands-strong protests this year have amassed to decry mass public school closures, and where large protests swarmed last year's NATO summit, Chicago activists are no strangers to protest. The shape, size and color of the coming anti-ALEC actions this week will be worth keeping an eye on.

Watch the video below, via Progress Illinois, of Monday's pre-protest protest: