Party begs for fewer primary debates, so candidates won't embarrass themselves on TV anymore. It will backfire 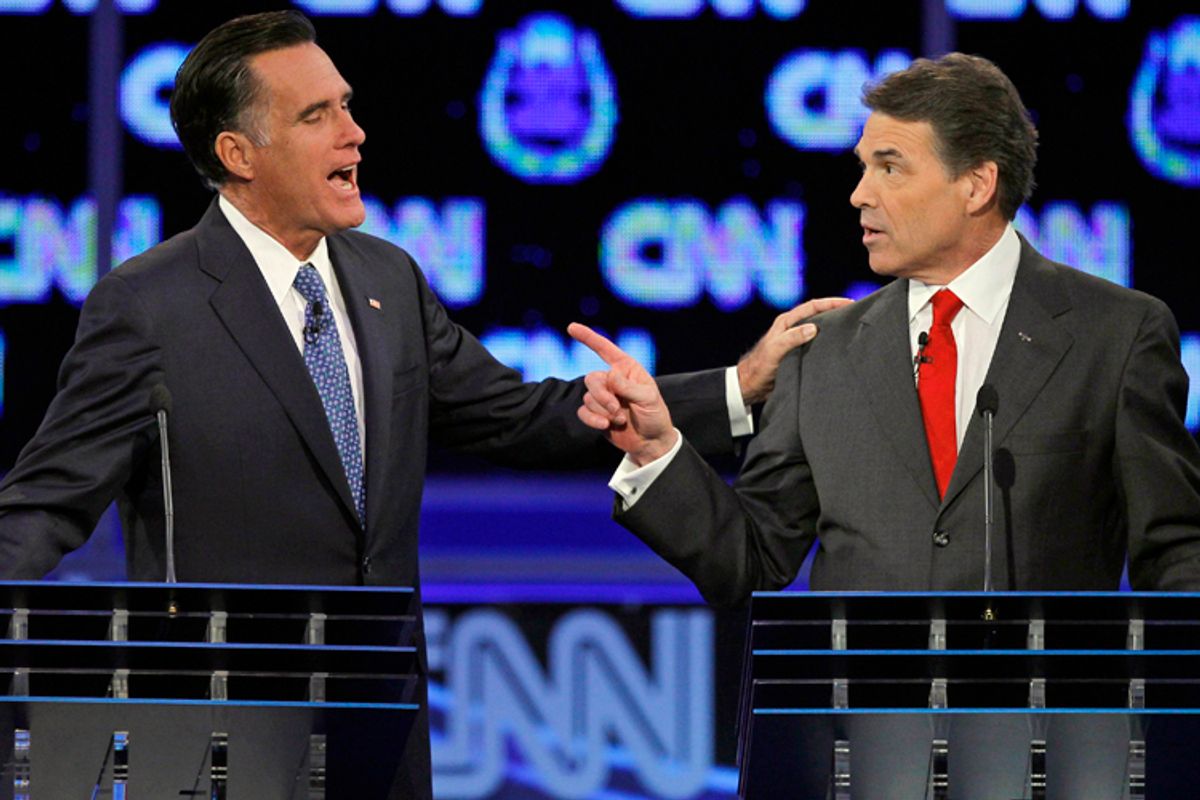 Reince Priebus, the head of the Republican National Committee, has told NBC and CNN that they will not be allowed to have any Republican presidential debates in 2016 if they go ahead and air planned films about Hillary Clinton, who will likely be the front-runner for the Democratic presidential nomination. That is the reason he gave them, at least, but it is not the actual reason Priebus wants to not have any debates on those two channels. The real reason, everyone knows and sort of acknowledges, is that debates were a disaster for the party in 2012, an endless circus made up entirely of clowns on a national tour of shame.

These debates were on TV, people watched (and mocked) them, and the real candidates, the ones the money people were counting on to win the stupid race, were forced to say unacceptable things to appeal to raging loons. Furthermore, the serious candidates looked less serious simply by sharing a stage with Newt Gingrich and Herman Cain. So: Fewer debates, next time, is the plan, and these Hillary movies are a convenient reason to cancel on two of the big networks. (Do you know how I know that the Hillary Clinton movies aren't the real reason? Media Matters' David Brock would also like the networks to cancel these movies, because, let's be honest, they probably won't be entirely flattering.)

The entire Republican primary system is broken, and embarrassing debates really number among the least of their problems, but it is easier for Priebus to preemptively cancel embarrassing debates than it is for him to fundamentally alter the makeup of the Republican primary electorate, a small and largely angry group who demand ideological fealty to a political philosophy that most Americans abhor. Unfortunately for Priebus, threatening to cancel debates is going to be much easier than actually preventing them from happening.

Maybe one of the Republican Party's primary malfunctions these days is that the interests of the party as a whole are frequently in opposition to the interests of individual Republican politicians. Preibus wants there to be fewer debates, because the debates are hugely embarrassing to the party and damaging to the eventual nominee. The candidates, though, need the debates, because there is nothing so precious as free airtime, and saying stupid things on television and then losing elections is a surprisingly lucrative career move these days. The debate problem is like the Ted Cruz problem: He acts against the long-term best interests of his party because in the shorter term, being an ultra-conservative is likely to make him rich and beloved. When 2015 rolls around a half-dozen would-be presidents and tryouts for the conservative speaking circuit are going to want free airtime, and the networks will happily provide it. The only question is whether the eventual "serious" nominee, if that's Jeb Bush or Chris Christie, is going to join them or not.

Cruz may well be among those jokers, along with Marco Rubio, Rand Paul, Scott Walker, Peter King, Rick Perry and various other figures adored by "the base" but sort of terrifying and confusing to everyone else. These guys are going to go on television if they are given the opportunity to go on television. You either finish your presidential campaign as the president or as a person who isn't the president but who is much more famous than before, and conservative movement fame means well-compensated positions at nonprofits or think tanks, speeches, maybe even television or radio jobs. Mike Huckabee is doing so well for himself he couldn't be bothered to run in 2012, and he would've probably beaten Mitt if he had.

So boycotting NBC and CNN isn't going to prevent another string of embarrassing debates from happening. But it may still be useful. Priebus wants to avoid those two channels in part because they're hostile to conservatives, and the moderators they select will likely actively seek to embarrass the candidates. Republicans are still mad that in 2007, NBC allowed Chris Matthews to co-moderate a Republican debate. They sort of have a point -- he's a shouty Democrat, and likely had no respect for the people onstage -- but the problem isn't liberal bias, it's "nonpartisan" journalist idiocy. Nonpartisan television news personalities are generally ill-informed about policy and hostile to politics in general. Bob Schieffer was utterly useless as a debate moderator. Partisan journalists are, by and large, more engaged with the issues and much more likely to ask interesting questions. There's really no reason why conservative journalists shouldn't be moderating, or at least co-moderating, Republican debates. Byron York and Rich Lowry would do a fine job.

If there are going to be another hundred primary debates, and there probably will be, the party would most likely prefer most of them to be on Fox. And that'd be fine: The candidates will be trying to appeal to Fox's audience for votes, after all. And liberals ought to be fine with it too, because the candidates will be just as likely, or maybe even more likely, to say dumb and embarrassing things on Fox as they would be on CNN or NBC. So boycott away, Reince Priebus.