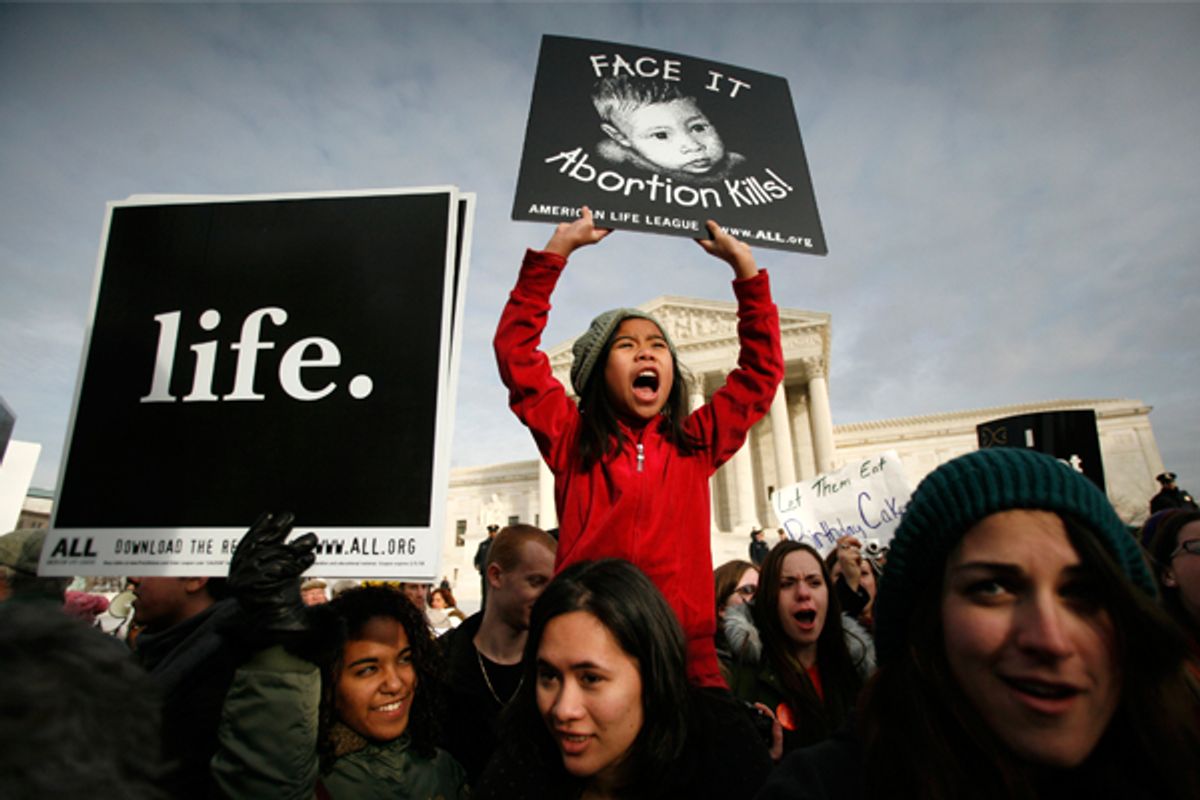 Over the past two years, conservatives have successfully maneuvered around Roe v. Wade to enact sweeping abortion restrictions across the country. In the first half of 2013, lawmakers enacted 43 pieces of legislation restricting abortion access – as many as were enacted during all of 2012. These laws – and the ones that are sure to follow – infringe on women’s rights to access family planning and abortion services, will result in more unplanned pregnancies and therefore more abortions, and are likely to have the unintended consequence of pushing abortions later into pregnancy.

For years women have had to navigate numerous restrictions when they attempt to have an abortion. In deciding Planned Parenthood v. Casey in 1991, the Supreme Court overturned Pennsylvania’s spousal notification law but upheld both the parental consent and informed consent statutes on the basis that they did not impose an “undue burden” on women trying to abort their pregnancies. Since then, numerous states have implemented abortion restrictions on the basis that they do not constitute an undue burden.

Most recently, anti-choice legislators have added to those regulations even more restrictive policies that make abortion increasingly difficult to access – in some places almost impossible to access – let alone in a timely manner. Over the past few weeks, lawmakers in Texas and North Carolina passed sweeping regulations that threaten to shutter nearly all abortion providers in those states. The Texas law restricts medication abortions, places onerous requirements on physicians who perform abortions, and imposes the increasingly popular and effective TRAP laws (targeted regulations of abortion providers) on providers, requiring them to increase the width of hallways, add janitor closets, expand operating rooms, etc.

Women’s health advocates have argued that these laws will lead to more unplanned pregnancies and result in a greater number of unsafe abortions. It is also likely that women will require abortions later in their pregnancies – the very situation conservatives are legislating against.

TRAP laws have become a favorite strategy of the anti-choice movement and have the effect of closing clinics that actually perform a wide range of reproductive health services. Anti-choice activists and lawmakers often refer to these clinics as if their sole function is performing abortions. In actuality, these clinics are a pillar of our nation’s health infrastructure. They prevent thousands of unwanted pregnancies each year by providing poor women, young women, immigrant women, and women of color low- and no-cost family planning. These clinics provide pregnancy education, testing, and counseling, which enables women who do choose to have an abortion to do so early in pregnancy. It is not hard to imagine that women will have more unintended pregnancies and require abortions later into pregnancy as those providers close their doors.

The Guttmacher Institute reports that already seven in 10 women who had a second-trimester abortion wanted to do so earlier in pregnancy but were unable to because they could not afford it. Economists who study family planning policy argue that the costs a woman seeking an abortion faces do not only come in the form of dollars, but also in the time required to access an abortion. A 2001 study by Marianne Bitler and Madeline Zavodny shows that state restrictions that impose mandatory waiting periods (in other words, a time cost) also delay abortions into the second trimester. A 1994 study of Mississippi’s mandatory delay laws showed a 17 percent jump in second trimester abortions after the law took effect.

Other research shows that adolescent women and low-income women are more likely to have abortions later in pregnancy. These are the very groups of people who rely on publicly-funded family planning clinics and who are most affected by the new abortion regulations. These studies are relatively dated; given that state-level restrictions have only ramped up since this research was conducted, the number of women delaying their abortions has likely escalated too.

These patterns are only deepened when lawmakers target not only abortion but the full range of family planning and reproductive health services that women rely on to take care of themselves and their families. Over the past two years, family planning providers across the nation have already been forced to decrease staff, cut hours, reduce services, and close as a result of funding restrictions and budget cuts. Under the new wave of restrictions, they will now face further cuts and many will be forced to close.

Anti-choice lawmakers insist their battery of abortion regulations aim to improve the health and safety of women and girls. This is simply not what the outcome will be. Women will experience more pregnancies and have abortions at later gestational ages, which only subjects them to greater financial burdens and much greater health risks. For example, the average charge for a second trimester abortion is double that for the first trimester. In addition, the potential for a major complication or death is also much higher for a second trimester abortion. If that’s not the definition of an undue burden, we don’t know what is.