Nobody panic! Beyoncé cut her hair 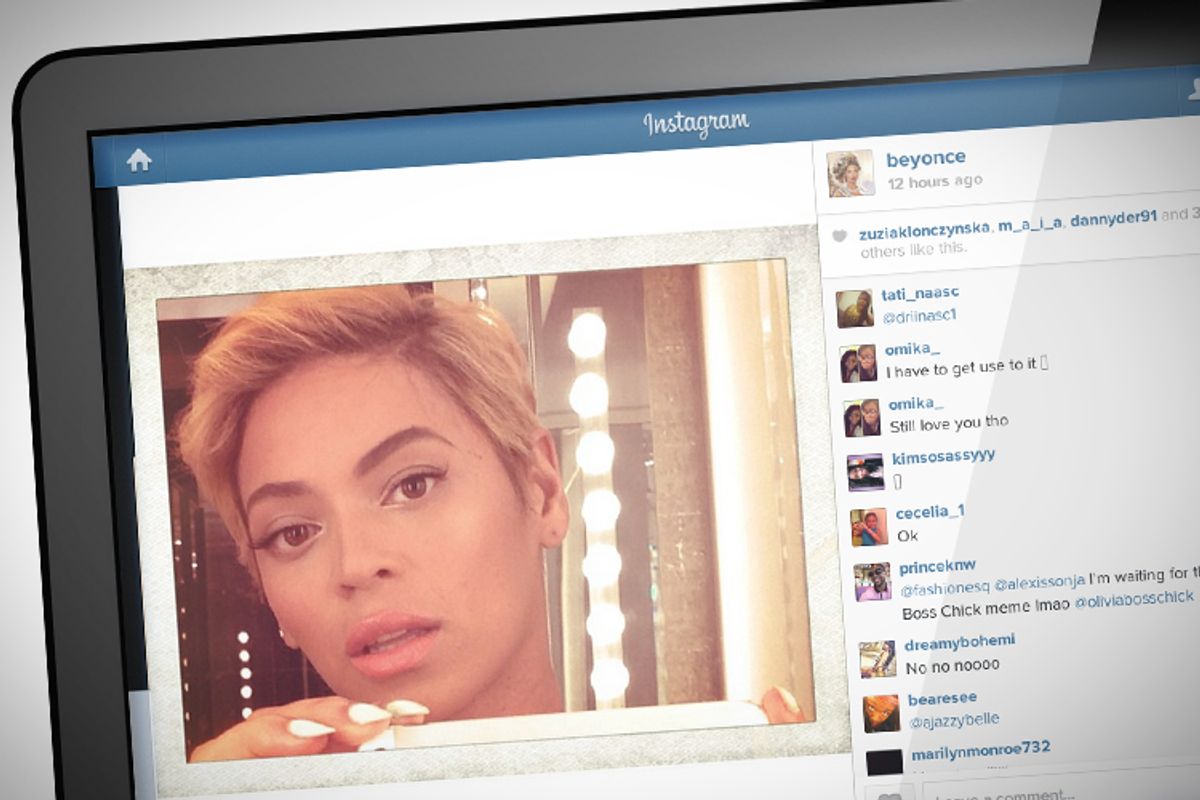 Clearly, Beyoncé has been watching "Roman Holiday." First, earlier this week, the pop princess eschewed the limo life and hopped on a set of smaller wheels to whisk her to her final concert at the Barclays Center. And now, she's gone gamine. Ms. Sasha Fierce debuted a new pixie cut on her Instagram feed yesterday, setting off a predictable riot of response.

For a woman who can spend the better part of a Super Bowl halftime show waving her hair back and forth, a woman who has been a spokeswoman for L'Oreal hair color, to abruptly change her look is a potentially career-shaking choice. After all, Beyoncé's hair is the second most famous part of her body. Would we all be able to get through this thing? As Richard Lawson solemnly asked on the Atlantic Wire, "Where were you when you found out?" Mashable, meanwhile, swiftly whipped up a tribute to the recently departed hair, in 25 memorable ponytail flinging, curl whipping, occasionally floor-mopping GIFs.

In a world where beauty is still so narrowly defined – and longer and lighter is the default standard -- for any woman to go in a different direction is to risk criticism and hostility. And for a woman of color to change her hair opens up even more potential conversation. As Ebony's Jamilah Lemieux joked Thursday, "Beyoncé, Oprah and the Politics of Black Hair" is the name of "the boring article that is already being drafted as we speak." But she added, "There are lots of important and interesting Black hair politics discussions that can happen from these new wigs. I hope they do."

Hair is a statement, and sometimes that statement is, in the words of Destiny's Child, "I don't think you can handle this." Two years ago, Michelle Williams sadly declared that while she loves her pixie hair, "The only people who like it, she says, are gay men and my girlfriends. Straight men across the board are not into this hair!" And one year ago, when Miley Cyrus cut her trademark locks, the tabloids fretted over her mental health, worrying that she'd "gone Britney." And while Rihanna's series of daring haircuts of the past few years have been brave, she's frequently found herself on the "worst" lists for her efforts.  In contrast, think of Beyoncé's very dear, very special friend Gwyneth Paltrow – she cut her hair once for a movie in the '90s but otherwise resolutely stuck with what works for her whole career. And at an event last winter, the two friends seemed to sport identical golden, flowy styles.

But Beyoncé seems so far impervious to the shock and horror that short hair seems to provoke. She's not getting any skepticism about her sanity for her cut. The only controversy her new locks have inspired is the speculation they may been inspired by a recent follicular malfunction. During a concert last month in Montreal, the singer gamely powered through "Halo" while her crew worked to extricate her tresses from a voracious electric fan. A staff member eventually had to cut her free. Might make any woman rethink her relationship with her hair. Or at least wind machines.

Whatever her reasons, Harper's Bazaar has already said they "love it," VH1 has wanted to "put a ring on it," and Beyoncé's own eyebrow groomer has authoritatively told the Daily Beast, "I assure you Beyoncé’s new haircut will be the hottest haircut to hit America since Jennifer Aniston’s 'Rachel.'" In case you had any doubt, by the way, the new Ms. Bey, extensions-free and flaunting her "real" – albeit blond – hair is still supernaturally gorgeous. What she's working is anything but the dreaded "I've given up on everything" desexualized cut that seems to inspire such colossal fear and revulsion. She looks instead like she's having a blast. She's also still hot, everybody, so the panic's been called off. And you can turn the electric fans back on.