A decade later, what happened to the mommy track? 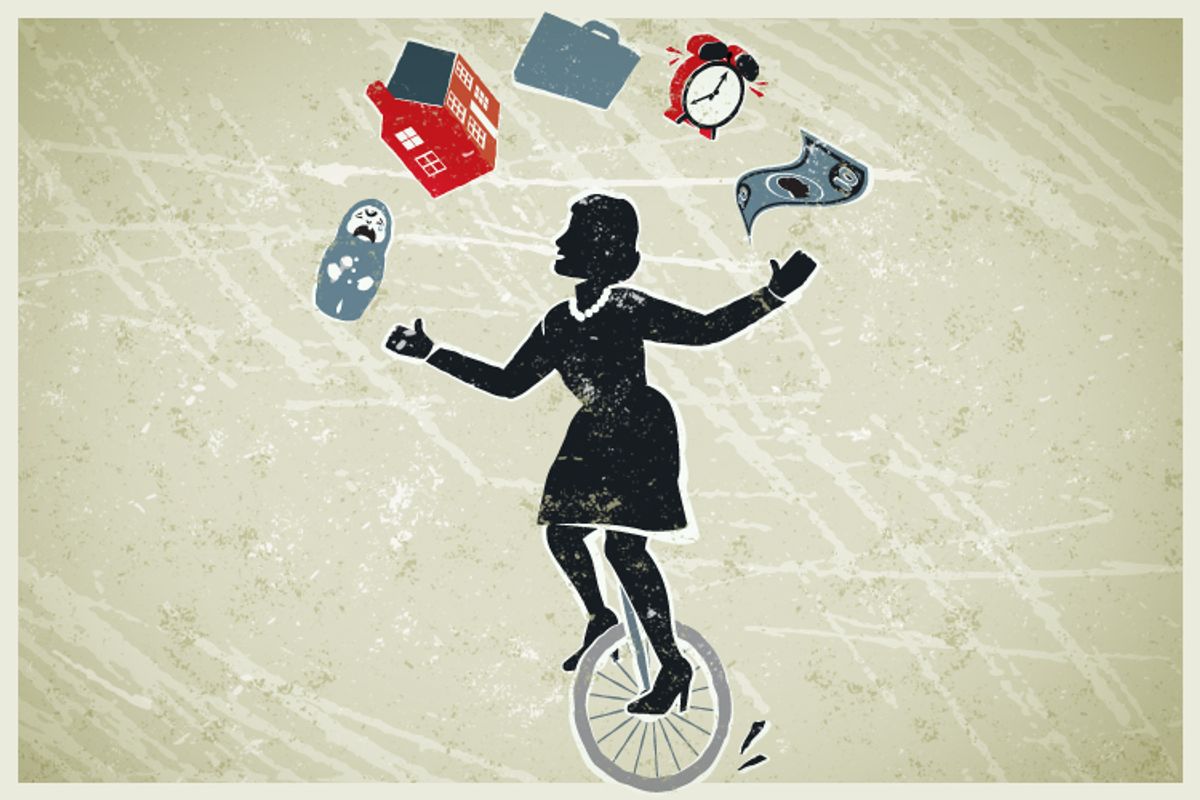 I remember the day vividly. Nearly 10 years ago, I sat in a Brooklyn, N.Y., Laundromat as my preschooler ate Cheerios and watched dirty clothes agitate while I fanned a copy of the New York Times across my seven-months huge pregnant belly and read the story that had already been reverberating loudly across my rapidly gentrifying brownstone neighborhood. It was Lisa Belkin's "The Opt-Out Generation," a tale that explained that the reason that more women don't "get to the top" was simply because they, Bartleby-like, preferred not to. Since then, we've had Marissa Mayer and we've leaned in. We've had Caitlin Flanagan say "To Hell With All That" and we've had Anne-Marie Slaughter explain why we can't "Have It All." We've had a buttload of "mommy wars." But what happened to the original "opt-out generation"? Now, the Times tells us, they "want back in." The New York Times: Where Affluent White People Question Their Life Choices.

The women of the original "opt-out" piece are in many regards much like me – urban, white, professional, perpetually with at least one small child hanging off them at any given moment. They were in others very much not like me. The eight women prominently featured in Belkin's story had all attended Princeton, had all "put on power suits and marched off to take on the world." And they had all "opted out" – walked away from their fast-paced, lucrative careers and directly toward what one woman called the "graceful and convenient exit" of motherhood.

It was an explosive piece at the time – at least in the micro world of New York Times readers. It declared, with the cautious revelation that while "there are ambitious, achieving women out there who are the emotional and professional equals of any man," that when they have the luxury of education and achievement and stable relationships, the ostensibly brightest women in the world would rather stay home and play Baby Einstein games with their children.

As one who lived in an opt-out hub, I can say it was true – to an extent. My little neighborhood teemed with opt-out moms. And among the smartest and most dedicated parents I knew back then were the mothers who'd left the corporate world. They were passionately involved in the life of the school; they arranged imaginative play dates; they poured themselves into lovingly restoring their brownstones -- and they adored their children unreservedly. They also had investments and spouses who made enough to carry a single income. The rest of us, with our individual combinations of desire, ambition and financial need, meanwhile simply kept on working.

Yet it turns out the past 10 years have not been all a blissful transition from developmentally appropriate baby toys to violin recitals for those moms who jumped off the track. In fact, Judith Warner's new NYT story shows that many of those original opters are now back in the workforce. For some of them, the road back to employment has had a smooth, particularly Junior League feel, with those motherly years of volunteering proving a unique networking opportunity. But others are struggling to get a professional footing, grappling with the self-esteem questions that a long time out have brought. One mother tells her now 12-year-old daughter unhesitatingly, "You need to work." Still others have faced relationship tensions and the challenges of single parenting. As one estranged husband bitterly, memorably explains, "Once she started to work, she started to place more value in herself, and because she put more value in herself, she put herself in front of a lot of things — family, and ultimately, her marriage."

In much the same way that "Prozac" had never exactly accurately defined the women of my "generation" a decade before, the phrase "opt-out" ultimately spoke to very few of us. The truth is that roughly 75 percent of mothers work -- and more significantly, that most of us are satisfied about it. And even among those who have taken time off but who are not upper echelon Ivy League types, the trade-offs have been different. As a friend who took off for five years when her children were young says, "I feel like I'm in a constant state of catch-up. There are things that I would like to accomplish in my career that I feel just won't happen because I will run out of time. But it's less that I wish I had been working instead of parenting full time during those years, and more that I wish our society better supported women in the workforce so we didn't have to choose between the two."

A decade on, I live in a less upscale neighborhood, and my two daughters are slowly beginning to spy their own futures in the distant horizon. Yet when I look at their possibilities, I worry that in spite of all the changes in the world of the past several years (thanks for the iPhones and marriage equality!), what's changed far too little have been the ways in which men and women ultimately finesse the work-life balance, or how the "options" extended to both of us so often default to traditional, limiting roles. And that's a loss for all of us. Just last month, the New York Times glowingly profiled women who are "Coveting Not a Corner Office, but Time at Home," gingerly climbing the ladder of success with a little parenting "help" from their spouses. Same as it ever was. Time marches on but there's one thing that's eternal: The Times will keep selling the fuzzy "opt-out" dream, with each a new generation of mothers.