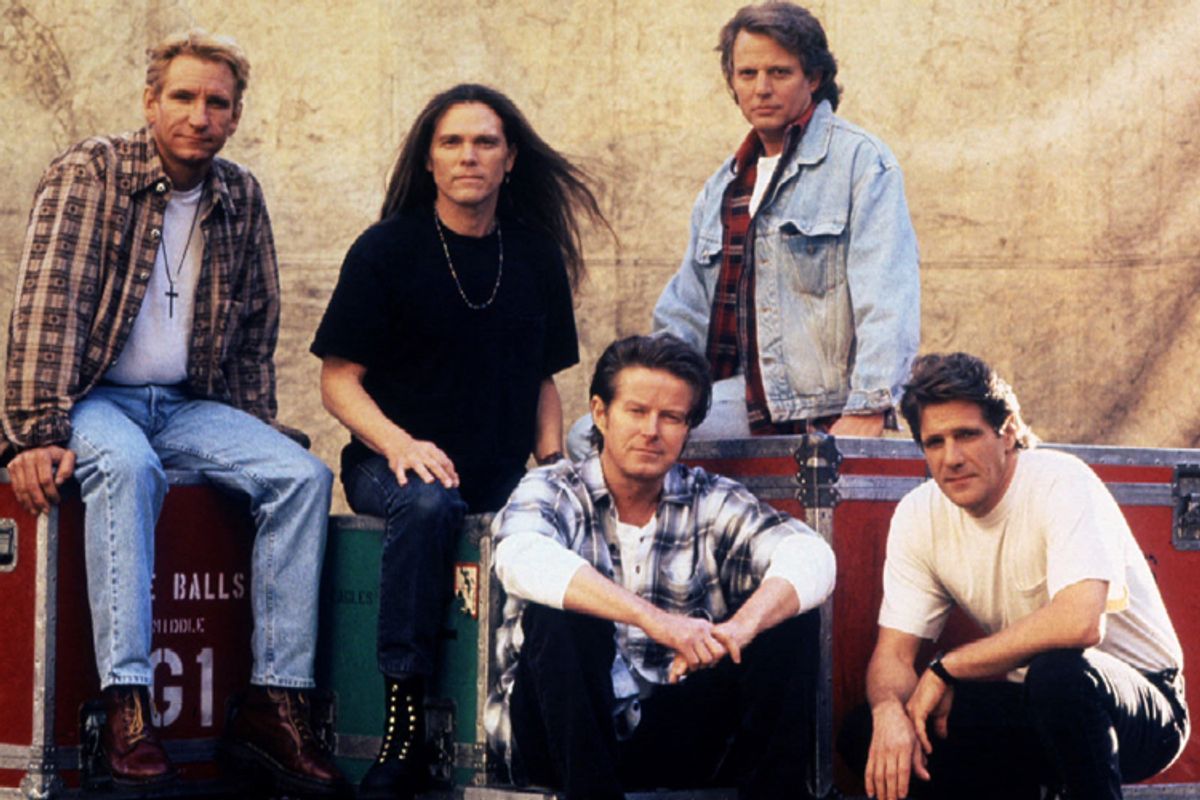 One of the sliest and funniest jokes in the Coen brothers film “The Big Lebowski” is the constant conflict between Creedence Clearwater Revival fans and Eagles fans. The film is set in a Los Angeles whose population is clearly delineated by its rock 'n' roll allegiances. Jeff Bridges’ bathrobed bowler/reluctant gumshoe may occasionally spin Dylan and harbors a repressed love of Busby Berkeley musicals that manifests itself in erotic dreams -- but he comes down squarely on the Creedence side of the debate. When a cab driver plays “Peaceful Easy Feeling,” Lebowski exclaims, “I hate the fucking Eagles, man!” He’s promptly ejected curbside.

That is only one of far too many quotable lines from “The Big Lebowski,” which didn’t bestow the Eagles with their lowly reputation but did find a succinct, blunt, bitter and hilarious means to express a hatred for the band. Before "Lebowski," the most repeated line about the Eagles came from rock critic Robert Christgau, whose stinging dismissal of the band remains among the most-quoted pieces of music journalism ever:

Another thing that interests me about the Eagles is that I hate them. "Hate" is the kind of up-tight word that automatically excludes one from polite post-hippie circles, a good reason to use it, but it is also meant to convey an anguish that is very intense, yet difficult to pinpoint. Do I hate music that has been giving me pleasure all weekend, made by four human beings I've never met? Yeah, I think so. Listening to the Eagles has left me feeling alienated from things I used to love. As the culmination of rock's country strain, the group is also the culmination of the counterculture reaction that strain epitomizes.

"Lebowski" and Christgau stood as the final critical word on the Eagles for decades. Until now. In recent weeks, both Chuck Klosterman's new book and a story in the Onion's AV Club have attempted to place the Eagles back on the right side of history. This sort of historical revision can sometimes be fruitful and rewarding — it has recently produced excellent documentaries on Rodriguez, Big Star, and Death, to name just a few — but it can also result in knee-jerk contrariness and uselessly counterintuitive thinking, masquerading as apart-from-the-herd bravery. With the Eagles, it’s all very neatly timed with market forces: There's a preening new documentary and yet another cash-in reunion tour this summer, boasting the first appearance by founding member Bernie Leadon in recent decades. And of course, they remain the best-selling band in rock history.

Hate, after all, has gone out of fashion in music journalism. To simply dismiss a band like the Eagles puts one in the minority in these days of critical reappraisals and click-bait "in defense of" pieces. Much better to write about finding something to like about the Eagles. Except for this: No amount of revisionism, wishful thinking or impressive writing can change the simple fact that the Eagles still suck.

Before examining the current revisionism, let's back up. The Eagles formed in 1971, its founding members brought together by Linda Ronstadt to play on her self-titled debut. Don Henley and Glenn Frey were L.A. transplants from Texas and Michigan, respectively, while Randy Meisner had gigged in Ricky Nelson’s band and Bernie Leadon had established his country-rock bona fides in the Flying Burrito Brothers. Their 1972 self-titled debut, which included such hits as “Take It Easy” and “Peaceful Easy Feeling,” established the Eagles as easily the most popular act in the burgeoning SoCal country-rock scene, much to the chagrin of artists like Gram Parsons and Gene Clark. When their follow-up, “Desperado,” failed to match that success, the Eagles buffed away some of their more country elements, such that by the time they released their first “Greatest Hits” in 1976, they sounded less like “Sweetheart of the Rodeo”-era Byrds and more like America. That collection has sold nearly 42 million copies worldwide and remains a popular catalog title nearly 40 years later.

Sometime between their formation in ’71 and their breakup in ’80, the Eagles became standard-bearers for rock excess; even as they launched solo careers and continued selling catalog titles, they represented everything that many people feel is wrong in rock music: egos as bloated as studio budgets, music influenced by drug intake more than emotional output, grown men playing cowboys. They come off as deadly serious, with no sense of humor about anything, least of all themselves.

In his new best-seller, “I Wear the Black Hat: Grappling With Villains (Real and Imagined),” Klosterman writes that the Eagles may be the foremost villains in rock 'n' roll. He sums up the case very well:

“They were rich hippies. They were virtuosos in an idiom that did not require virtuosity. They were self-absorbed Hollywood liberals. They were not-so-secretly shallow. They were uncaring womanizers and the worst kind of cokehead. They wanted to be seen as cowboys, but not the ones who actually road horses. They never rocked, even after adding Joe Walsh for that express purpose (the first forty-five seconds of ‘Life in the Fast Lane’ are a push). They lectured college kids about their environmental footprint while flying around in private jets. They literally called themselves ‘The Eagles.’”

Klosterman admits that he hated them for years, until he listened to “The Very Best of the Eagles” in 2003. He had no major revelation about the music, but simply realized he didn’t have it in him to hate a rock band anymore. In other words, he’s less concerned about the Eagles than the pervasive hatred so many people harbor for the Eagles, which he argues is based more on a perception of the band as people than on the music they made together. “And it wasn’t just that I didn’t like hearing the music or seeing their faces on MTV — it had something to do with seeing them as representations of what I wanted to be against. I didn’t see the artists I loved as heroic, but I saw the artists I hated as villainous. And that is a feeling I can no longer feel.”

If it’s a defense, it’s a strange one: noncommittal and apologetic, as though even the man who praised Billy Joel and still rides for Mötley Crüe might be a little sheepish about siding with the Eagles. It's also not the defense made by someone who wants to actively engage with the music. It’s classic Klosterman: more critical of people who hate things that are lame than he is of things that are lame.

Indeed, Klosterman doesn’t discuss their music or even why it might turn him (or anyone else) off, which means he neglects to consider how an artist might build an identity through his or her art. The Eagles are viewed as “self-absorbed Hollywood liberals,” “uncaring womanizers,” and “cokeheads of the worst kind” (and what is the best kind of cokehead?) because that’s how they portrayed themselves in such songs as “Hotel California,” Witchy Woman” and “Already Gone.” In reality, the Eagles may be puppy enthusiasts who love Lena Dunham and Daft Punk; in their songs, the Eagles come across as tools.

There are, in other words, two versions of the band to contend with: the actual human beings who are collectively known as the Eagles, and the public figures who are portrayed in the music. It’s an important, albeit not necessarily revelatory distinction, and a similar duality plays out in Jason Heller’s recent Inventory column for the Onion AV Club, titled “Earlybird: 14 non-hits that show the Eagles are better than you think.”

Heller wisely distinguishes between the Eagles we know and loathe, who notched enormous hits like “Seven Bridges Road” and “Life in the Fast Lane,” and the Eagles who are less well known, who recorded deep-album cuts like “Tryin’” and “Early Bird.” While not quite convincing, the list does point out one important idea: The Eagles are known almost exclusively for their hits, to the extent that their albums, aside from “Hotel California,” might as well not exist. Most people can sing a few bars of the radio staple “Take It to the Limit,” while few could tell you which album it appeared on.

There is a very different band lurking on their first two albums, 1972’s “The Eagles” and 1973’s “Desperado,” one admittedly more adventurous than “Greatest Hits” would have us believe. That version of the Eagles experimented with texture and tradition, adding Scruggs-style banjo to “Earlybird” and glam-rock guitars to “Out of Control.” That makes them interesting -- albeit still not very good. Those early albums show a band still trying to figure out what it wanted to be and what kind of music it wanted to play; the shifts in genre can be jarring and even arbitrary. While they might have become a respectable boogie-rock act (a West Coast Lynyrd Skynyrd) or a serviceable glam-rock unit (an Americanized T. Rex), they chose instead to let “Take It Easy” guide their career. It’s the first song on the album, but it’s also the most generic, with none of the country-rock or pop-bluegrass flourishes that animate much of the album.

As their career progressed, the Eagles shed much of their country aspects, with only their fairly bland harmonies remaining. They became high priests of lowest-common-denominator rock, crafting studiously inoffensive rock designed to appeal to the broadest swath of the record-buying, radio-listening public. And perhaps that’s why Jeffrey Lebowski and so many of us continue to villainize the Eagles: They didn’t stand for anything. They lacked the outrage that drove John Fogerty’s music and Gram Parsons’ unwavering belief that the answers were blowing in the hickory wind. Their hedonism was never as much fun as Marc Bolan’s, and their desperadoes had no code of honor like Willie Nelson’s redheaded stranger or Townes Van Zandt’s Pancho and Lefty. The Eagles may have decried record industry avarice on “Hotel California,” but they were already the multi-headed beast at the head of that table. Don Henley may have transformed himself into a public scold, but his ecological concerns, however valid, never informed the music he made with the band or as a solo artist.

The Eagles’ legacy is selling a lot of records. All the reappraisals in the world won’t change that.