The Internet economy keeps killing us

Everyone pushes new services that slash consumer costs. So how come inequality worsens and so few prosper? 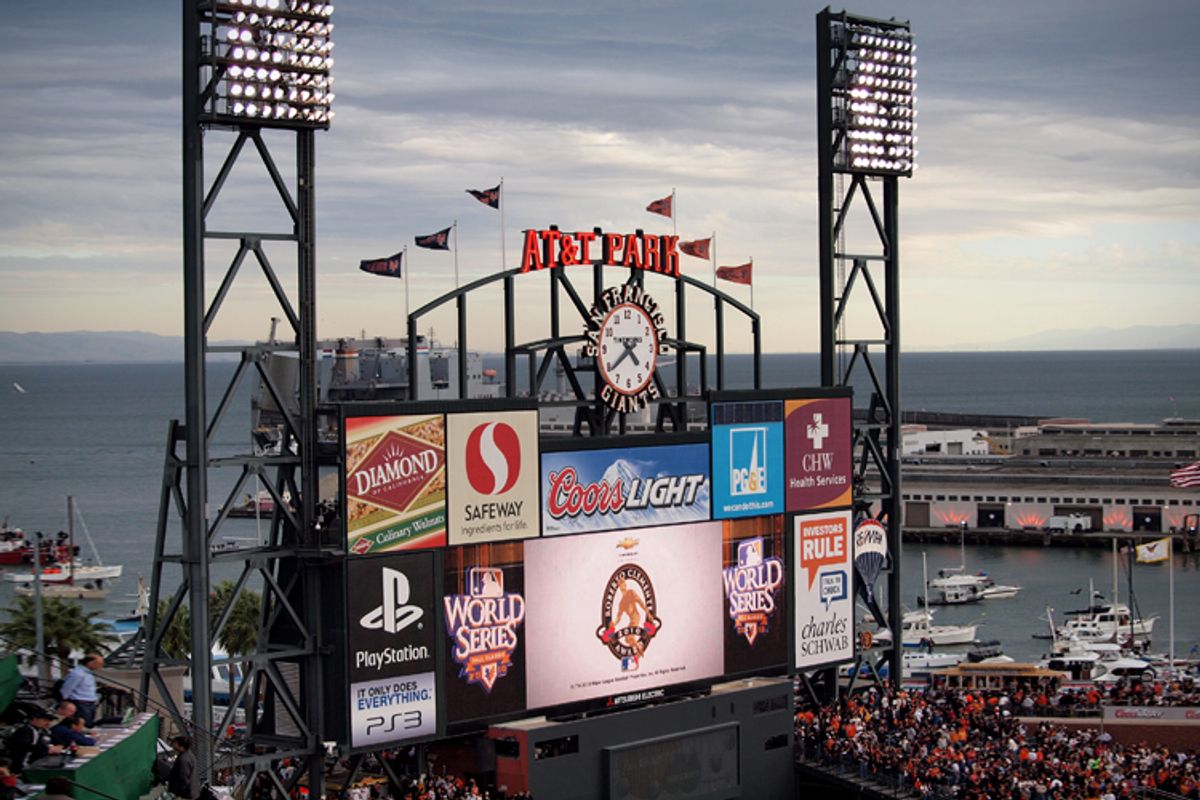 A disclaimer: I accepted an invitation to watch a San Francisco Giants game with a bunch of "disruptive" finance start-ups in the Virgin America suite at AT&T Park Tuesday night because I thought it would offer a great opportunity for subversion. While dining on canapés and sipping martinis, I planned to grill my unwitting suspects about technologically mediated class stratification and growing income inequality. Changing the world? From a luxury box nestled along the foul pole in right field? Hah!

So, overt class warfare was not on the menu. But the central contradiction of our Internet-enabled new economy was still very much apparent. Nearly everyone I talked to was pushing services that they claimed would be of great benefit to consumers: access to cheap credit, great merchant deals, low-cost financial advice. In theory, I had little problem with most of the business plans -- any number of them might turn out to be useful and successful products. There was one very obvious takeaway: There is so much frenzied competition in the financial start-up space that I have little doubt the smartphone generation will enjoy extraordinary access to sophisticated, cheap financial products.

But Internet services have been slashing the consumer cost for everything for 20 years now, and in the big picture, the rich have gotten richer, the poor are scrambling ever more furiously for the leftover scraps, and the middle class is simply withering away. There is no end to the delirious flow of innovation, but also no answer to an increasingly sticky question: Why are so few prospering as a result of all these great new tools?

If Tuesday night's event proved anything, it's that the most advantageous position during an economic boom is in front of the cash register at the general store. The dozen or so financial start-ups at AT&T Park were brought together under the auspices of Yodlee, a company that describes itself as a "scalable and robust personal finance data platform for powering innovation in financial services."

What that means is that Yodlee has accomplished the grunt work of creating a back-end that provides access to the personal financial data collected by scores of different institutions -- banks, credit card companies, investment money managers, etc. Other companies eager to exploit that data can then build their products on top of Yodlee's programming interface, without having to worry about the annoying details of how to "scrape" information out of a particular institution. Nearly all of the start-ups at AT&T relied on Yodlee to provide essential plumbing.

Yodlee CEO Anil Arora strolled around the Virgin America box with the smile of a man who happens to own the monopoly on miner's picks during a gold rush. His grin provided fresh affirmation of a primal Internet economy truth. Controlling the platform upon which everyone else competes is the key to lasting success. At AT&T I saw three different start-ups offering various forms of financial planning advice. That's great for Yodlee and great for the consumer looking for cheaper alternatives to Merrill Lynch and Fidelity. But all I could think of, as I heard Planwise discussing how it would help prospective homebuyers get a good grip on their real financial situation, was: Wow, all this competition must make for a tight margin business. Financial planners beware: Your job category just got squeezed, big time.

The scale of profit likely to be generated from providing rock-bottom-priced financial planning advice, or low-interest loans, or ad-supported free accounting software isn't obviously huge. For a significant number of the start-ups, the key seemed to be figuring out how to gain access to our financial data. In other words, the consumer-facing side of these companies wasn't necessarily the money-making side. The goal was to get enough people signed up so that you could aggregate all their commercial activity -- their bank and credit card statements, their travel rewards data, their home and car loans -- into a database from which you could derive useful information. The co-founder of a company called Glyph explained how it planned to help merchants understand customer behavior by identifying patterns visible in their retail behavior. Did someone stop going to a particular restaurant after regularly dining there every week for a month? Maybe it was time for that restaurant to lure that person back with a targeted discount offering?

Aggregate a large number of customers and you suddenly become a Big Data player, theoretically able to discern larger patterns that offer other profit-making opportunities.

And right there you see the bargain that Silicon Valley has struck with consumers. The provider of the Web-based service gives us a seemingly useful service at low cost. But that's just the tease, the lure that allows the provider to latch on to the real product -- our data. That data, describing in fantastic detail what and where we buy and consume, is in turn used to sell us other stuff. We think we're saving when we click yes on the loan whose terms are too good to be true. But we're really just setting ourselves up for the sting later down the road.

So buyer beware: Every time you open up your finances to be examined by someone else, you may be giving up something worth more to them than the service you are getting from then.

But that doesn't always have to be true. Out of all my conversations during that Giants game, I was most intrigued by a company called ClearAccount, represented by two gentlemen from the United Kingdom who were puzzling out the action on the diamond with the same furrowed brow with which I would greet a cricket match. But the furrows disappeared when I asked them to explain what they were up to.  ClearAccount (just up and running in the UK and soon to launch in the US.) -- offers third party bank overdraft protection. Their pitch: They'll help you fend off the outrageous fees charged by banks when you bounce a check (or debit card) for rates far under what your typical payday lender might charge.

It works like this: ClearAccount will inject money into your checking account when it looks like you are running close to empty, and then withdraw it when you are flush again. You set the terms: When my bank account reaches X please add Y. You pay for the privilege of this short-term loan, of course, but according to ClearAccount, the company's selling point is that you'll be paying a lot less than what your own bank charges you for overdraft protection. And much, much less than the sleazy payday lender will charge you.

Look at that: a market response to a clear market opportunity created by banker greed. In the U.S. what the big banks call "overdraft protection" are really just scams to extract additional pounds of flesh from our lacerated corpses. Congress has proven relatively impotent at reining in the abuse. Maybe the market can do better? I'd love to see ClearAccount do well, and inspire a whole range of similar new corrective responses to unneccesarily egregious  banking practices.

But on further reflection, there's also something discouraging about ClearAccount's business model. Prosperity for ClearAccount will require large numbers of people living so close to the edge, and under such financial pressure, that they're regularly in danger of going into the red. Hey! Isn't that a perfect description of the economy we've got right now?

Which brings us to yet another paradox inherent in the Internet economy. For workers enmeshed in a globalized economy where everyone has cheap access to amazing productivity tools, the landscape has never been more competitive. So we need every service we can get that will help us manage our money, save our pennies, and get our small businesses up and running at the lowest possible cost.

The net result: As disruption piles upon disruption and innovation follows upon innovation, we end up running in place faster than ever.