Jennifer Aniston leaves a string of failed comedies behind with the vulgar, anarchic "We're the Millers" 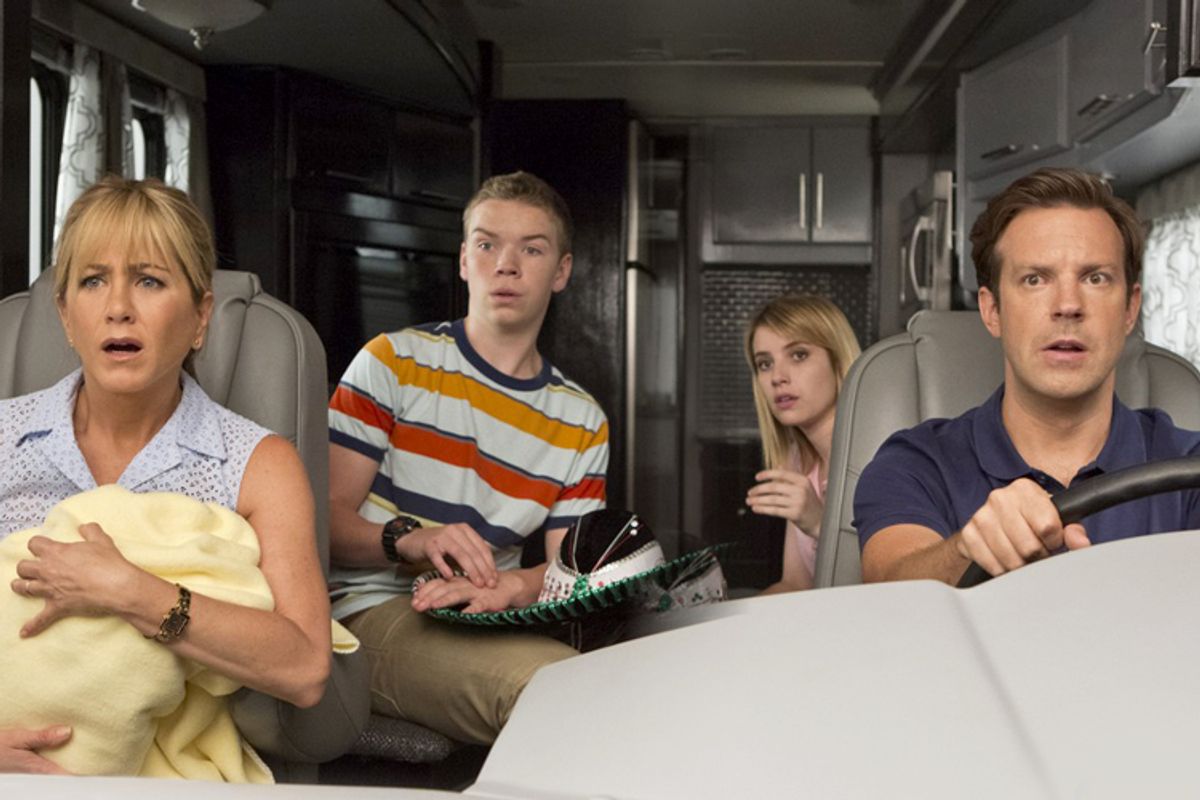 It had to happen eventually: Jennifer Aniston has made a funny movie (and also, it seems, a hit). Mind you, “We’re the Millers,” in which Aniston and Jason Sudeikis play feuding lowlifes who have to play husband and wife in order to smuggle two metric tons of weed across the Mexican border, is full of jokes that don’t connect. Watching Aniston do a striptease routine that begins with her dressed in suburban-mom garb – khaki Capri pants and a sleeveless, flower-patterned blouse – ought to be funny or sexy or both, but is mostly just uncomfortable. And maybe you’re a kinder and more mature person than I am, and won’t laugh at director Rawson Marshall Thurber’s shameless attempt to out-gross the “Hangover” franchise by showing us what a tarantula bite on the testicles looks like.

“We’re the Millers” is a raunchy, hard-R comedy with almost no plot worth recounting. (Shocker: Amateurish drug-smuggling scheme goes awry!) It doesn’t try to deliver any sort of positive social message and suggests that people with real marriages and families are faking it too, pretty much the way dead-end dope dealer David (Sudeikis) and broke, jilted stripper Rose (Aniston) do. Maybe that’s why I liked it. To the extent that the ersatz Miller family’s journey through a bunch of sketch-comedy gags and ludicrous mishaps expresses any kind of worldview – there are four credited writers on this movie, and God knows how many others behind the machinery – it boils down to the idea that men and women alike yearn for what they don’t have, and that making your way through life is about seizing the bizarre opportunities it thrusts at you.

Aniston is now 44 years old and has made a string of undistinguished and often interchangeable failed comedies. I have a high tolerance for her films, and I know for sure I saw both “Just Go With It” and “The Switch." Damned if I can remember a single thing about either of them. (OK, one of them is an Adam Sandler movie, which explains why I've blocked it from memory.) But that age is no longer the dead zone it used to be for American actresses – Hollywood is outgrowing its sexism, little by little – and Aniston still has that peculiar, Everywoman charisma that made her a star in the first place. In “We’re the Millers” she follows the course she semi-successfully pioneered in “Horrible Bosses,” playing a damaged, snappish, cynical and foulmouthed version of America’s sweetheart, but one who underneath it all – big surprise – is looking for love. You can’t call Rose a hooker with a heart of gold, even though David compares her to the Julia Roberts character in “Pretty Woman,” because she doesn’t turn tricks and denies having a heart of gold.

As for Sudeikis, I often find him bland and overly smarmy on TV – the fact that his “Saturday Night Live” repertoire includes Joe Biden and Mitt Romney speaks for itself – but he and Aniston have interesting, off-kilter chemistry, and playing a down-and-out, self-loathing drug dealer lends him just a little edge. After getting rolled by street kids, David owes a big pile of money to a highly implausible drug lord played by Ed Helms, and agrees to the latter’s patently ridiculous plan to transport an enormous load of pot inside a rented RV. (The deeply strange Lucille Ball-Desi Arnaz road-trip classic “The Long, Long Trailer” is somewhere in this movie’s DNA.) He talks Rose into coming along only because she’s being evicted and is desperate for money. Their “daughter” is Casey (the terrific Emma Roberts), a street runaway with disastrous taste in boys, and their “son” is David’s nebbishy, semi-abandoned neighbor Kenny (the odd, intense young English actor Will Poulter, something of a revelation here). He's the one who winds up with a tarantula in his briefs. Don't say you were not warned.

Almost nothing that happens in the story is worth describing in detail, except for the extended shaggy-dog interlude with a square-bear RV-drivin’ family (headed by the hilarious Nick Offerman and Kathryn Hahn), that keeps threatening to devolve into perverse group sex. And we understand from the first time Rose and David cross paths that this is yet another Aniston rom-com, no matter how cleverly disguised, and that two people who seem to hate each other so thoroughly have a quite different destination ahead. What makes “We’re the Millers” not just watchable but funny and ultimately rewarding is the ferocity with which this central foursome go after each other, the way they reject and ridicule the notion of family but hunger for it desperately at the same time. I can relate! Dampen your expectations, blunt your intellect – see what I did there? – and don’t read anybody else’s review. “We’re the Millers” has just the right stupid, humane vulgarity for the dog days of August.