As Kissinger goes viral with Colbert, we need Hitch 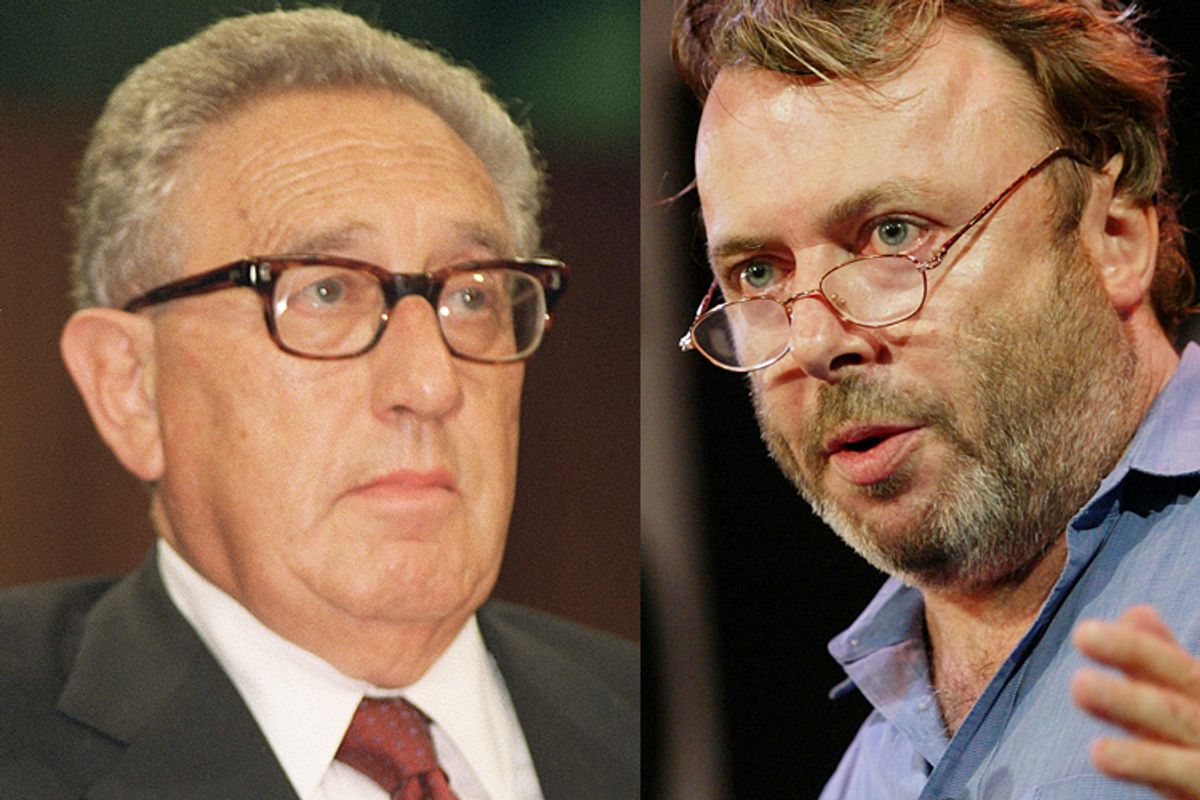 We've never missed Christopher Hitchens so much as this week, when aging war criminal and former Secretary of State Henry Kissinger made a cheery cameo in a musical skit on the Colbert Report. Hitch, who described himself as a "political opponent" of Kissinger (and that's when he was being kind, wouldn't have let it fly; he would have reminded us that Kissinger's career was shaped by overseeing or enabling mass murders and genocide.

In Hitch's absence (I'd say "God rest his soul," but that seems inappropriate for the belligerent atheist) we thought we'd compile some of his finer Kissinger take downs, lest anyone -- amused by the Colbert cameo -- forgets what a nasty piece of work Kissinger has been. As one Salon editor noted, the secretary of state's appearance on the comedy show would be akin to Dick Cheney singing karaoke with Jimmy Fallon in 15 years' time.

In 2001, Hitch wrote in  his book-length takedown, "The Trial of Henry Kissinger":

Many if not most of Kissinger's partners in crime are now in jail or are awaiting trial or have been otherwise punished or discredited. His own lonely impunity is rank; it smells to heaven. If it is allowed to persist, then we shall shamefully vindicate the ancient philosopher Anarcharsis, who maintained that laws were like cobwebs: strong enough to detain only the weak, and too weak to hold the strong. In the name of innumerable victims known and unknown, it is time for justice to take a stand.''

In a 2010 Slate piece, which post-dates by nine years "The Trial of Henry Kissinger," the writer reminds us  to not go easy on the aging politician with a helpful rundown some of Kissinger's most shameful political moments:

Our culture has once again suffered a degradation by the need to explain away the career of this disgusting individual. And what if we did, indeed, accept the invitation to "remember the context of his entire life"? Here's what we would find: the secret and illegal bombing of Indochina, explicitly timed and prolonged to suit the career prospects of Nixon and Kissinger. The pair's open support for the Pakistani army's 1971 genocide in Bangladesh, of the architect of which, Gen. Yahya Khan, Kissinger was able to say: "Yahya hasn't had so much fun since the last Hindu massacre." Kissinger's long and warm personal relationship with the managers of other human abattoirs in Chile and Argentina, as well as his role in bringing them to power by the covert use of violence. The support and permission for the mass murder in East Timor, again personally guaranteed by Kissinger to his Indonesian clients. His public endorsement of the Chinese Communist Party's sanguinary decision to clear Tiananmen Square in 1989. His advice to President Gerald Ford to refuse Alexander Solzhenitsyn an invitation to the White House (another favor, as with spitting on Soviet Jewry, to his friend Leonid Brezhnev). His decision to allow Saddam Hussein to slaughter the Kurds after promising them American support. His backing for a fascist coup in Cyprus in 1974 and then his defense of the brutal Turkish invasion of the island. His advice to the Israelis, at the beginning of the first intifada, to throw the press out of the West Bank and go for all-out repression. His view that ethnic cleansing in former Yugoslavia was something about which nothing could be done. Forget the criminal aspect here (or forget it if you can). All those policies were also political and diplomatic disasters.

He stressed the "enormity" of Kissinger's role in helping elect Nixon, "who had surreptitiously promised the South Vietnamese junta a better deal than they would get from the Democrats." In his take-no-prisoners, especially not war criminals, style Hitch wrote:

This was what it took to promote Henry Kissinger. To promote him from a mediocre and opportunistic academic to an international potentate. The signature qualities were there from the inaugural moment: the sycophancy and the duplicity; the power worship and the absence of scruple; the empty trading of old non-friends for new non-friends. And the distinctive effects were also present: the uncounted and expendable corpses; the official and unofficial Iying about the cost; the heavy and pompous pseudo-indignation when unwelcome questions were asked. Kissinger's global career started as it meant to go on. It debauched the American republic and American democracy, and it levied a hideous toll of casualties on weaker and more vulnerable societies.

And perhaps instead of watching Colbert dance with Kissinger in a juvenile, ill-thought meme, watch Hitch discuss his "political opponent" in this 2001 interview about "The Trial of Henry Kissinger":