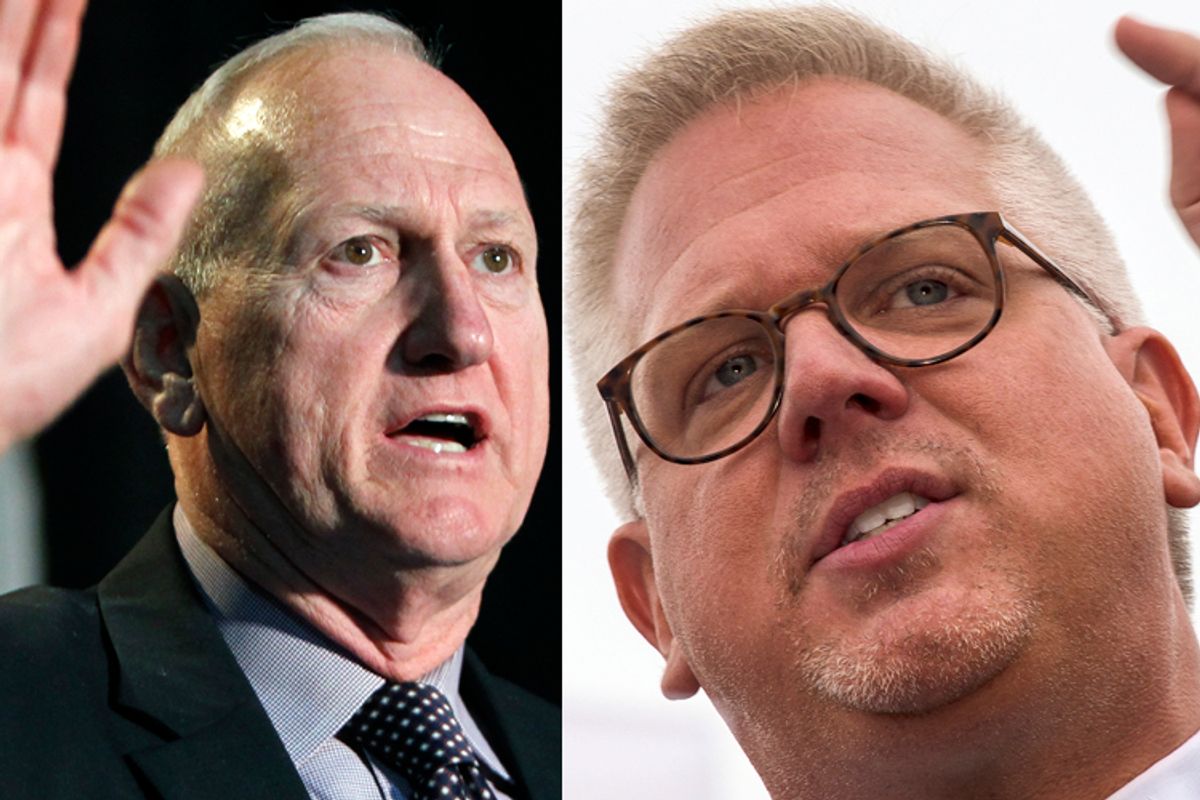 Family Research Council executive vice president Lt. Gen. Jerry Boykin has backed out of speaking at a conference promoted by Glenn Beck after learning that the event has ties to the League of the South, a neo-Confederate group.

"Yes, that is true. When it was brought to our attention that there were connections to this group that does not share our values, General Boykin withdrew from the event," FRC's vice president for communications, J.P. Duffy, said in an email to Salon, confirming an earlier blog report.

Boykin is still listed as the top speaker of the Founding Faith Conference, a two-day event scheduled to take place in Texas in late September that aims to "train fellow citizens in the Founder’s view of Law and Government and be equipped to give them a working knowledge of our Founding Documents." The conference's website also notes that Boykin will be available for a VIP dinner, photo op and panel discussion.

But the retired general-cum-social conservative activist has dropped out of the conference after questions were raised about the conference's ties to the League of the South and another controversial group.

One of the scheduled speakers at the event, David Whitney, is the chaplain of the Maryland chapter of the League of the South. And Michael Peroutka, the founder of one of the conference's original sponsors, the Institute on the Constitution, was elected to the board of directors of the League in June and pledged IOTC resources to help the neo-Confederate group. Peroutka ran for president in 2004 on the Constitution Party ticket, earning endorsements from the League and conspiracy broadcaster Alex Jones.

Warren Throckmorton, a professor of psychology at Grove City College, a Christian school outside Pittsburgh, Pa., who blogs at an eponymous website, first reported on the League's connections to the conference, and reported today he heard from unnamed sources insider FRC that Boykin was planning to drop out. Throckmorton also notes that the IOTC has now been removed from the Founding Faith Conference sponsor page website, as has Whitney, but not before he took screen grabs. Boykin remains listed on the website, but in case he is removed, here's a screen grab.

Representatives of the conference and Glenn Beck did not immediately respond to requests for comment.

It should be noted that Boykin is no San Francisco liberal. He has often come under fire from the left for his strident views on homosexuality and Islam, and was censured by the Bush White House for an anti-Muslim comment while serving in the military.

The religion blogger Richard Bartholomew adds that the conference organizer is Margaret Andrews, who runs MTC Promotions Group. Last year, MTC organized a Glenn Beck meet-up that was a sort of warmup for his larger "Restoring Love" rally. Andrews has also organized events featuring David Barton and Shane Krauser, a lawyer whom Beck has called "the David Barton of the U.S. Constitution."

UPDATE: Margaret Andrews, the conference organizer told Salon that while she respects Boykin's right to drop out, "my event must go on." She said she was completely unaware of the Institute on the Constitution or Whitney's ties to the League of the South and quickly disassociated herself from them once Throckmorton brought it to her attention earlier this week. She called his blog posts on the event a "vicious attack." She's currently looking for a new Constitution trainer to replace the IOTC.

She added that Beck is not involved in the event, but that she paid for the promotion by purchasing advertising from the broadcaster.

"I cannot speak with any authority of the relationship between the League of The South and the Institute on The Constitution, which was recently brought to my attention. However, as you can see from the event web site, the conference will still be featuring many diverse presenters who will be speaking on a variety of different civil rights and Constitutional issues of our day."