A pathetic day for the Republican Party

Mitch McConnell is humiliated by a staffer, but can't fire him -- because the Tea Party has more power than he does 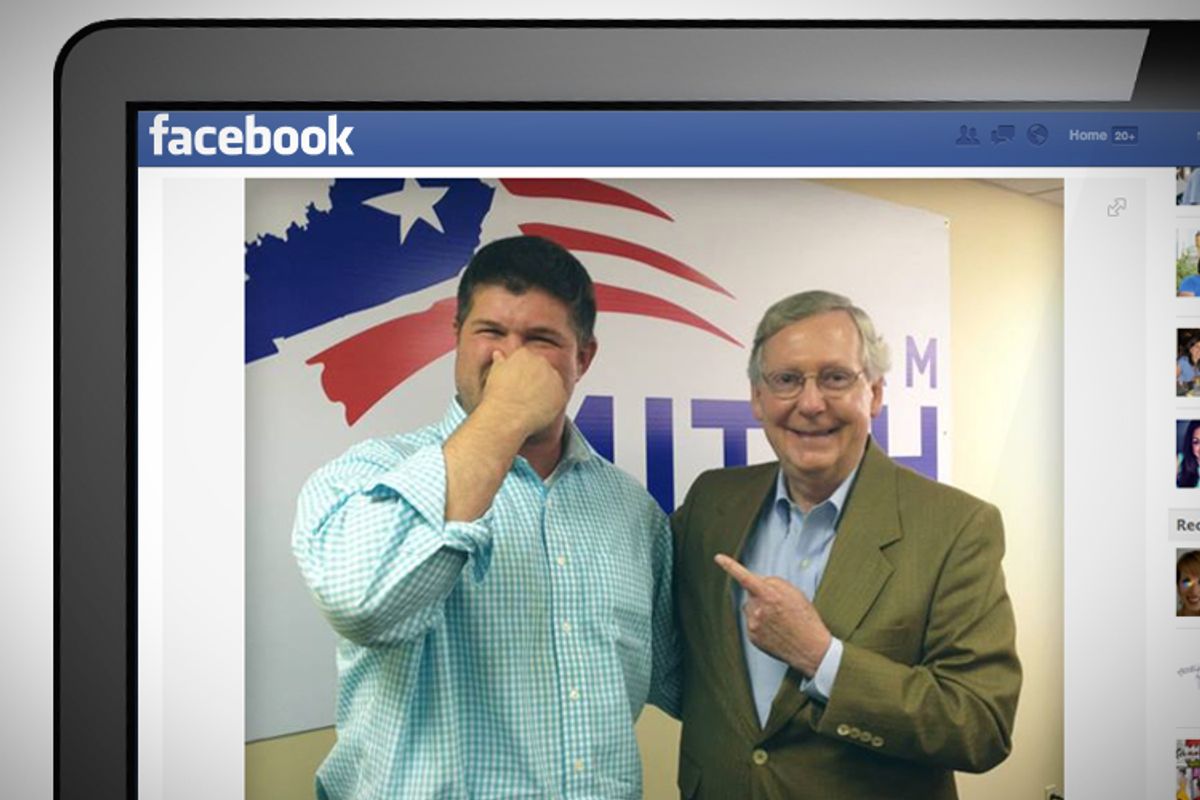 This is what kids these days call a "pro tip."

If you trash talk your own candidate for public office and then get caught, you should probably resign. Or at least expect to be let go. It's like the political equivalent of insubordination. If you somehow manage to keep your job, it says more about your employer than it does about you.

Which brings us to Mitch McConnell and his campaign manager Jesse Benton -- a Ron Paul acolyte whom McConnell recruited ahead of his reelection campaign to shore up his weakened credibility with the right.

It was revealed on Thursday that six months ago Benton was surreptitiously recorded admitting what everyone assumed -- that he was "sorta holdin' [his] nose for two years," to work for a guy whose last major ploy in Kentucky politics was a failed attempt to keep Ron Paul's son from becoming a senator. The marriage was conceived as one of convenience and political junkies didn't need Benton's confession to know that was the case.

But copping to it changes things. There's a difference between the general sense that President Obama had strained relations with military leadership in 2009, and Stan McChrystal emasculating his administration to a Rolling Stone reporter. We know how that story ended.

That Benton still has a job (another top McConnell aide told the New York Times he'd "absolutely" keep it) and the campaign is making light of the remark (see the cheesy picture above) is an implicit admission of McConnell's political weakness.

This isn't like the time Marco Rubio developed dry mouth during his State of the Union response speech and took an inelegant swig of water on live television. (That episode was easy to co-opt, and co-opting it elegantly neutralized the brief embarrassment he might have suffered otherwise.) It's an admission that McConnell would prefer to have his campaign managed by someone who admitted he doesn't believe in its mission rather than replace him with someone more loyal -- because that would further antagonize conservative voters who don't trust him yet control his fate.

It's a metaphor for the control the right has claimed over the GOP since George W. Bush left office -- a campaign-trail manifestation of the power back-bench Republicans have successfully asserted in both the House and Senate. And it's a harbinger of what they hope to do when it's time to pick their presidential candidate three years from now.