Here's why we haven't fixed our crummy voting system yet

While Republicans try to disenfranchise poor and black people through voter ID laws, Democrats have a panel 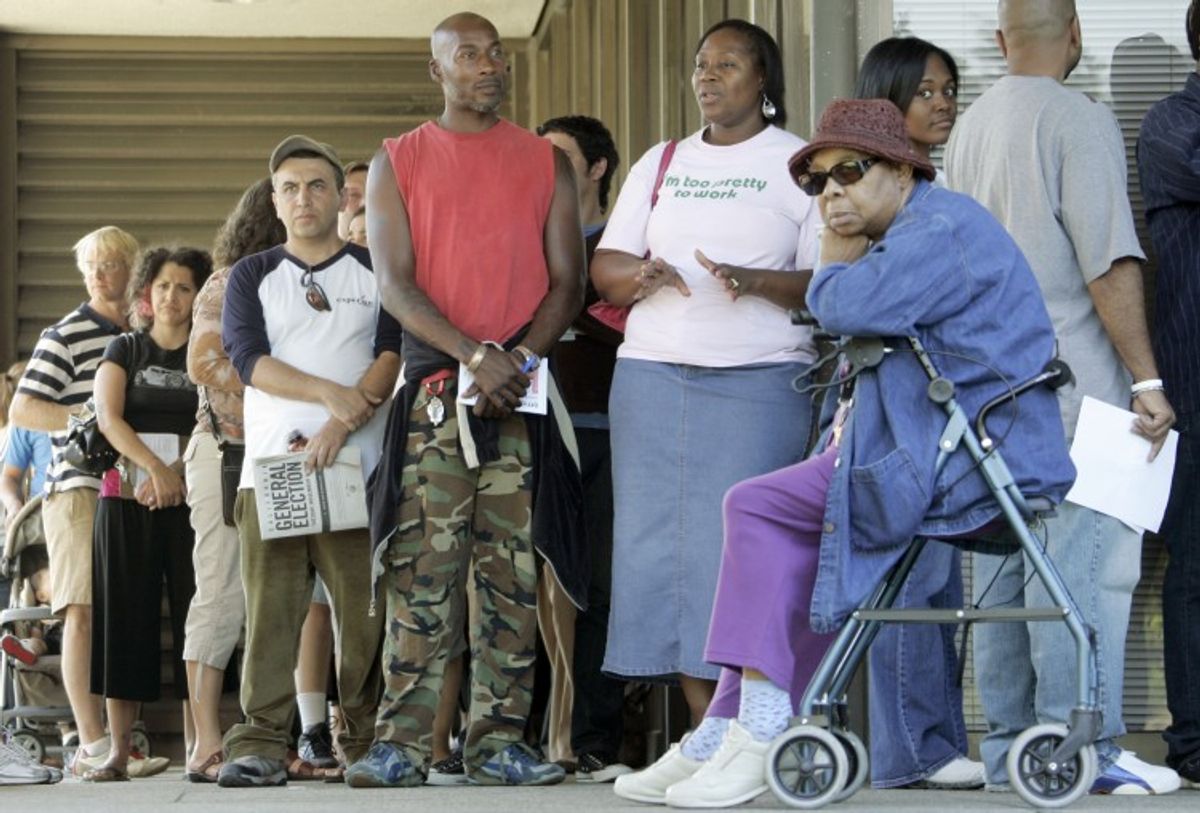 "We gotta fix that," the president said in his victory speech last November, following his reelection. The "that" in need of fixing was our broken and unequal election system. And we all agreed. There should be fixing. So why hasn't there been any yet?

As you may recall, one subplot in the national telenovela that was the last presidential election involved the very purposeful attempted disenfranchisement, by Republican state legislators and officials, of certain key Democratic voters, which is to say poor and black people. This took many forms, from poorly drawn-up supposed lists of felons to be thrown off the voter rolls to the legal harassment of groups engaged in voter registration, but the most common tool was the voter ID law. On Election Day, while most black Americans managed to have their votes counted, the pictures told a distressing story across the country: In neighborhoods made up primarily of minorities, people waited hours to vote. In white neighborhoods the process was quick and easy.

There are plenty of working Americans who would lose their jobs if they spent hours of a weekday waiting in line to vote. They likely did not vote. This is a crummy way to run a national election.

The president's solution was a commission. A bipartisan commission. The commission has a nice website. It seemed to not do anything at all for a few months but now they have held some public meetings. Eventually -- this fall, I think? -- the commission will deliver a report.

So the Democratic response, then, is a bipartisan commission that will release a report. Republicans at the state level, meanwhile, have been pretty busy getting things done to make voting more difficult. More restrictive voting laws have already gone into effect in multiple states. More laws are on the way in Wisconsin and North Carolina.

Here's a neat tidbit: There already was a national bipartisan election commission. It was supposed to be a permanent one, established by the Help America Vote act, the Republican Party's mostly useless response to the tremendous disaster that was the 2000 presidential election. It is called the Election Assistance Commission. There are supposed to be four members, appointed by both parties. What is this commission up to right now? Oh, you know, just being obstructed by Republicans who really hate voting. They refuse to nominate anyone. The House has voted to eliminate the commission.

The president's plan seems to be to get electoral reform by creating a flawlessly bipartisan list of policies that barely have his fingerprint on them. That plan falls apart, though, when you remember that Republicans just don't want voting to be easier, and they will not be convinced by Mitt Romney's lawyer that it is in the party's interest to make voting easier.

The House GOP is a nightmare, but a better approach would've probably involved horsetrading, rather than high-minded bipartisan appeals. Voter ID laws would be fine, actually, if the United States had a free and automatically issued national ID of some sort. We do not have such a thing, because I guess it makes some people frightened of tyranny? Still, that could've been part of a deal: One side accepts state voter ID laws, on the condition that acceptable state-issued ID is provided easily, and for free. There is already a long checklist of things reformers want fixed about our elections. Another commission is going to recommend things we already know we should be doing. We don't need "innovation," we need more access and fewer obstacles. There ought to be a commission on how to pass what we already know we need.