In a landscape where being offensive is almost expected, one topic is off limits — but maybe not for long 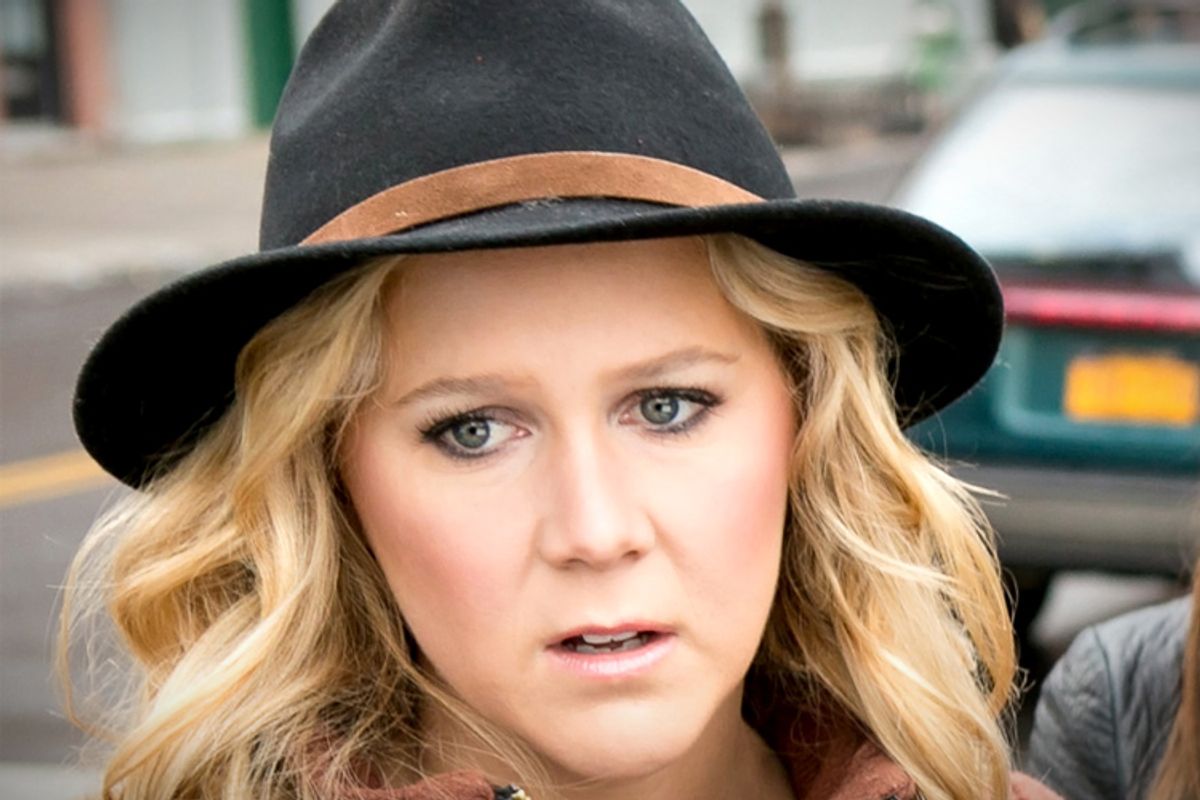 In comedy, it sometimes seems as if the boundaries of offensiveness are stretched to the point where no taboos are left. Yet Comedy Central’s newest star comedian was steered away from a certain topic when making "Inside Amy Schumer," which wrapped up an acclaimed first season on July 2. “I wanted to write a sketch where a guy tried to kill himself and had a failed suicide attempt, but then still had to come to work on Monday,” 32-year-old Schumer revealed in a recent radio interview. “And everyone knew, but he didn’t get his work done and he is like, ‘Well, I didn’t think I was going to be here.’ And we wanted it to be like he was a hipster — like, what would a failed suicide be as a hipster? And I think they were like, ‘that’s too sensitive’ or ‘too personal.’”

Bear in mind that Schumer, whose startling chutzpah is facilitated by her chubby-cheeked adorableness, was permitted to spin hilarity from — among many other gloriously twisted bits — the exploitation of a friend’s cancer for one’s own ends, advancing feminism with a gang bang, a vibrator that doubles as a mezuzah, the dying wish of a terminally ill child, and spousal homicide. But apparently, removing suicide from a serious context is uniquely distasteful, as indicated by the mass outrage that greeted Vice magazine’s restaging, in a June fashion spread, famous women writers’ suicides. Vice, whose raison d’être is incorrigible controversy-stoking, was forced to remove the images from its website and issue an unprecedented apology.

One sketch depicting suicide did, in fact, make it onto "Inside Amy Schumer" and consequently went viral: A group of women are deflecting compliments with increasingly elaborate self-deprecation — “Look at your cute little dress!” “Little, I’m like a size 100 now. Anyway, I paid like $2 for it, it’s probably made out of old Burger King crowns. I look like a whore locked out of her apartment” — until one of them reacts to “I love your jacket!” with a cheerful “Thanks.” This horrific flouting of feminine etiquette prompts her friends to immediately, and gruesomely, kill themselves. But, as with so much of Schumer’s comedy, it’s prevailing cultural norms that are being lampooned — not suicide itself. So is suicide still a comedy taboo that American audiences can’t quite stomach?

A new cable channel aimed at millennials doesn’t think so. Pivot TV (which launched on August 1, and is notable as the first U.S. channel to offer broadband-only subscriptions) is airing a new Australian sitcom with a suicidal woman as a main character. In the first episode of "Please Like Me" — written by, starring and based on the life of comedian Josh Thomas — Josh’s clinically depressed mother, Rose (Debra Lawrance), is rushed to the hospital after washing down a box of painkillers with half a bottle of Baileys. Her plight gives rise to some of the funniest lines in this laugh-out-loud funny show, which also focuses on 20-year-old Josh’s realization, on the same day as Rose’s suicide attempt, that he’s gay.

When a hospital doctor asks Rose if she has a headache, Josh responds with mild incredulity. “Headache? She took quite a bit of Panadol.” Poker faced, he tells his mother: “If you get a headache in the next few weeks, I really think we should be calling their customer complaint line.” Then, when he’s escorting Rose to her subsequent psychiatrist’s appointment, she weeps in the hallway and says she doesn’t want to be there -- supposing someone sees her? “No one’s gonna see you Ma, alright. And if they do see you, they’re probably mental too, so that’s nice — you can bond!”

"Please Like Me" is a breath of fresh air not only in its nonchalance over which issues might be too sensitive for comedy, but also in its respect for viewers’ intelligence. The pace is leisurely, no sitcom-y tics afflict the actors’ performances, and the tone is naturalistic yet free of the contrived mega-awkwardness of "The Office" or "Curb Your Enthusiasm." The result is the purest, deftest exploitation of the thin line between laughter and pain. “There’s something I’ve been wanting to ask you,” Josh’s elderly Aunt Peg (Judi Farr) announces as he’s getting ready to go on his first-ever date with a man. “And don’t be immature about it. How large are your testicles?” The reason being, she saw a documentary about the syndrome where men have an extra X chromosome, and Josh has a “pear-shaped body, which isn’t really right for a boy, now is it? And man-boobs.”

It takes a true comedic talent such as Thomas to make life’s most excruciating moments so mercilessly entertaining, and the argument over what constitutes acceptable gag material tends to boil down to precisely this: If a line is genuinely funny, very little is actually taboo. Even rape, a debate recently re-ignited by "This Is The End," Seth Rogen and Evan Goldberg’s bromantic apocalypse comedy. As various commentators have discussed, the movie has several moments where the idea of rape is played for humor, including a puerile squabble between a bunch of guys over who gives off the most “rapey vibe” to Emma Watson (she happens to be — semi-spoiler — the only woman among the Hollywood actors holed up at James Franco’s house, taking shelter from the deadly supernatural forces ravaging Los Angeles). In the opinion of Slate’s Aisha Harris, this sequence passes “the rape joke litmus test,” since “the butt of the joke is the rapist, not the victim, and the humor calls attention to the reality of rape and rape culture.” When I was in the theater, the scene did indeed get some of the loudest laughs of the entire movie, but — and far be it from me to be cynical — I’m not sure that the guffawing youngsters in the audience appreciated the finely considered nuances of Danny McBride ("Eastbound and Down") gleefully yelling “if anyone’s going to rape anyone, it’s Jay!” (Baruchel, best known as Norah’s obnoxious ex in "Nick and Norah’s Infinite Playlist.")

A litmus test of permissible suicide humor isn’t as easily formulated, but a recent BBC sitcom, axed in July after one season, cogently demonstrated what not to do. "Way To Go" — created by Bob Kushell, a producer on various U.S. sitcoms and a former writer on "The Simpsons" and "3rd Rock From the Sun" — centers on a “suicide machine” hired out to the old and terminally ill by three down-on-their-luck young men. Inexpertly constructed with machine parts from fast-food restaurants, and hence nicknamed “The McFlurry of Death,” the device enables people to slowly and lethally inject themselves with a drug normally used to put animals down. (Such a machine was in fact unveiled by a German doctor in 2008. Jack Kevorkian, aka “Dr. Death,” used a similar device, referred to as the “Thanatron” after Thanatos, the god of death.)

Mostly hammy and misconceived, "Way To Go" did manage a few faintly amusing lines. “There is no word of mouth, you idiot,” says a character to his business partner in a discussion about ways to expand. “If we do a good job our clients are dead.” The scenarios, though, weren’t sufficiently plausible to take meaningful swipes at the debates around euthanasia. Nor did the script aspire to the kind of high-wire satire appropriate for a premise that some viewers might, as those disclaimers say, find disturbing — a mode epitomized by "Futurama’"s coin-operated suicide booths (whose options include “quick and painless,” “slow and horrible,” and “clumsy bludgeoning”) and in the pithy concepts beloved of "The Onion." “Stouffers To Include Suicide Prevention Tips On Single Serve Microwavable Meals” is, to my mind, the platonic ideal of a suicide joke.

Satire of the highest order also distinguishes "Heathers," the 1989 breakout vehicle for 16-year-old Winona Ryder and 19-year-old Christian Slater, and the only movie in Hollywood history to get people laughing at the idea of a teen suicide epidemic. A perennial cult favorite that has spawned a documentary, a musical, a book and quotes now firmly in our lexicon (“Fuck me gently with a chainsaw” has nearly 200,000 Google results, while “I Love My Dead Gay Son” is available on a variety of T-shirts), "Heathers" was recently under development as a sequel TV series at cable network Bravo. Alas, Buzzfeed’s Kate Aurthur has reported “with heavy heart” that the show is “dead again.”

Bravo’s demurral is understandable; without the death storyline, the premise of “Heathers” resembles many “90210”-ish shows — but in the post-Columbine era, and in the era of teens being “trolled to death,” it would be challenging to re-envision the original plot of teen murders being staged as suicides, inciting copycat suicide attempts and inspiring a number one song, “Teenage Suicide, Don’t Do It.” (There are eerily prescient parallels between Christian Slater’s character, gun-toting psychopath JD, and the Columbine shooters, down to the black trench coat JD wears.)

The low-budget movie, a box office flop that became hugely popular on cable, VHS and DVD, is widely considered one of the best high school comedies ever made. Yet the sophistication of the "Heathers" script, and the unremitting blackness of the humor, places it in a category of its own. High school’s toxic cauldron of peer pressure, mindless conformity and amoral superficiality — embodied in the ruling triad of popular girls all named Heather — is scriptwriter Daniel Waters’ primary target. But he’s also savage on the self-glorifying earnestness brought forth by public tragedy. “Whether or not a teenager decides to kill themselves is the biggest decision of their life,” declares the hippie-ish guidance counselor in a TV broadcast. “With supervision from people like myself, we can help young people make the right decision.” It’s a rare film whose caustic sensibility packs as hard a punch twenty-five years on, but "Heathers" makes today’s teen comedies, even the more daring ones, seem anodyne. That suicide remains a verboten subject — at least in homegrown comedy — only underscores the audacity of Waters and the director, Michael Lehmann.

This enduring comedic taboo is destined, however, to move swiftly from edgy to mainstream to trite via the customary avenue: featuring in an Adam Sandler movie. Sandler’s latest project, "Hello Ghost," is about a man who keeps attempting suicide and is besieged by a quartet of ghosts. A remake of a Korean supernatural comedy, the script will be written by Karen Croner, who was responsible for the unfunny, but not entirely charmless, Tina Fey and Paul Rudd rom-com "Admission." The “usually it’s Sandler’s audience who want to kill themselves” jokes are, of course, writing themselves.