Everything you know about drugs is wrong 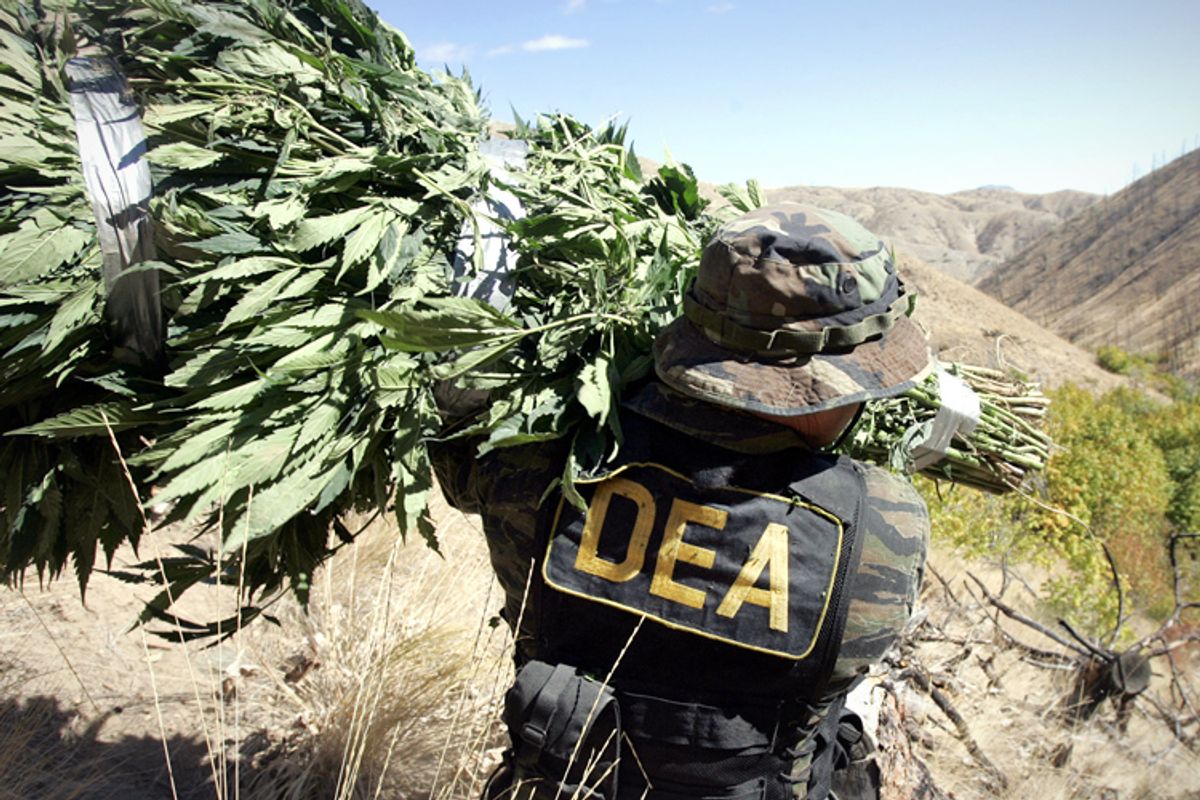 A DEA agent carries a bundle of marijuana. (AP/Elaine Thompson)
--

It’s not every day you read a book that blows the lid off of everything you’ve ever been taught about drugs, but Dr. Carl Hart’s recent work, "High Price," does just that. Part memoir, part myth-buster, the fast-paced read details his journey from a violent Miami ghetto to the halls one of the world’s most prestigious universities.

At the heart of "High Price" is the argument that current U.S. drug policies are not only morally wrong, but scientifically wrong as well, a game of politics and fear-mongering in which our government sanctions the widespread prescription of certain drugs, while locking more than 1.5 million people behind bars each year for the use of others. If you’ve ever wondered why our nation pops OxyContin like candy, while its twin sister, heroin, evokes fears of driveling, strung-out junkies, High Price has an answer – just perhaps not the one you were expecting. I caught up with Hart to talk about the book, his career and how he thinks American drug policy needs to change.

What made you decide to write this book -- and how did you decide to include personal stories in a book about the science of drugs?

I wanted to write this book because I was disturbed by much of what is being said about the effects of drugs and drug policy. Most people engaged in the discussion don’t know anything about drugs. Voices from people like me, scientists who have studied drugs and people who came from places I come from, are not included in those discussions. I thought the book would be a way to contribute to the discourse.

As to why I included personal anecdotes, I know books that deal with drug policy and drug effects are typically boring. People learn by example so I told my story to help them be more engaged and learn better. The personal stuff also helps to serve as a vehicle for kids and people coming up after me to say, “Hey, if he can do it, I can too.”

You grew up in an environment where many of your peers and family led lives plagued by drugs, prison and violent death, yet you became a neuroscientist and the first tenured black professor of science at Columbia University. In the book you cite hard work and influential mentors as factors in your success, but reserve a large portion of credit to the absence of the criminal justice system in your life, despite the fact that you did use and sell drugs as a youth. What role does the criminal justice system play in perpetuating cycles of poverty, violence and drug use?

There have been studies on people who have committed the same crimes that show if one group goes to jail and the other group who has committed the same crimes is able to avoid jail for whatever reason, the second group fares better. When you go to jail you are under the supervision of the state. You are housed with people who are criminals, so that becomes the expectation. People learn to become better criminals in jail and prison. That’s one of the major points that I am trying to make; we should think of alternatives, instead of housing “bad kids” or who kids are identified as bad in the same place with little appropriate supervision.

Some high-profile research has been used to argue that some substances are so addictive that addicts will pursue them to the point of death. In the book, you dispute these studies and instead argue for the role of social relationships in drug use. How did you arrive at that conclusion?

The focus of research has always been on the drugs themselves. I’m not saying that’s an inappropriate focus, but the vast majority of people who use drugs have no [addictive] problem. That tells me that people’s behavior under the influence of drugs is affected by something other than pharmacology. Another piece of evidence is that when you offer people alternative reinforcers you can shift drug-taking behavior in a way that is predictable. If you offer them an attractive option, they will take that option. Again, if the drug was so powerful, you wouldn’t get these types of shifts.

There are scientists who have experimented with rats and primates who found that if you put the animals alone in a cage and allow them to self-administer cocaine or methamphetamine, they will do so until they die. However, if you provide that animal with other alternatives such as a running wheel or an enriched cage, they won’t take the drugs; they take the other options. So we conducted experiments with human drug users, during which they could self-administer cocaine (or methamphetamine) or receive alternative reinforcers of $5 or $20. When we offered them $5 they chose the money on about half of the opportunities and drugs the other half. When the alternative was $20, they always chose the money. So that tells me that it’s not just the drug, there are other factors affecting use.

During the surge of crack cocaine use in the 1980s, you blamed the drug for devastating your neighborhood and other black communities. But you later came to argue that poverty, crime and violence had been present in these neighborhoods long before crack cocaine, and that what had changed was how politicians and the media were framing the issue. Describe this reframing and the persistence of myths about crack as a “black drug.”

The myths about crack started in part because of the media. During the mid 1980s the media broadcast images primarily of black people in inner cities using and purchasing crack. The show "48 Hours on Crack Street" remains the most popular show in the history of television and it shows black people using crack cocaine. Those images and the photographs in newspapers are etched into the American consciousness. Most people don’t know a crack smoker personally, but all they have to do is watch TV or read the news and they get these images of black people on a crack rampage. So starting in the 1980s they thought this new drug -- which wasn’t really new but they thought it was -- was so awful, and they attributed all the problems in their neighborhoods to crack cocaine. But it simply wasn’t true. We also have more black people being arrested for crack cocaine, even though research shows that whites use the drug at higher rates. It’s because we concentrate our law enforcement resources in black communities.

Your book argues that throughout history bans on certain drugs have been preceded by media-hyped fears about drug use among marginalized groups, such as minorities, immigrants and the poor. How has this trend continued today with the widespread prescription of Adderall and the demonization of its near-equivalent, methamphetamine?

To get Adderall you have to go to a physician and have health insurance. The people using Adderall look like the people in Congress and their kids, so it doesn’t have the same stigma as methamphetamine, which is viewed as a drug used primarily by poor white people and gay people. These are vilified groups so you get the same reaction as with black people and crack cocaine. So we have one drug, Adderall, which is purchased through a pharmacy and associated with outstanding citizens, and the other drug, methamphetamine, which is illegal and associated with a group of people society doesn’t like. Most people don’t know how similar the two drugs are, which is why I wrote a paper about it. I am trying to bring more attention to the issue.

In the book you point out that most scientific research on drugs reports on the pathological aspects of substance use, while ignoring the reasons people use drugs. Why do you think this blind spot exists?

Ninety percent of research on drug effects is funded by the National Institute of Drug Abuse, and their mission is to focus on the pathological use of drugs. If you are funding researchers to look primarily for pathology, not surprisingly, that is what they are going to find and report on. Some people in the country think they have a comprehensive understanding of drugs, but they don’t because the framework in which they are viewing only looks at a limited portion of drug effects, the pathological ones. This sets us up to have a skewed perspective on drug effects: we think that all drug effects are bad.

The last groundbreaking book that challenged public perception of drug use was Michelle Alexander’s 2010 best-seller, "The New Jim Crow: Mass Incarceration in the Age of Colorblindness." In it, she argues that the current system of mass incarceration for drug use is in essence an extension of old Jim Crow laws. Do you agree with this view? How do you see your work as continuing this conversation on the role of race in drug policy?

Yes, I agree with Michelle Alexander and she did an excellent job of showing how that is happening. My book is an extension of her work in that she didn’t write about drug effects. One thing that people can argue is that drugs are so awful so we must have these strict, repressive laws because the benefits of the current approach outweigh the negatives. So my book is challenging that narrative to say, “Hey, we have been lied to about the real effects of drugs.” That means that the assumptions that underlie our drug policy are flawed, they are wrong. Where she didn’t challenge current information about drug effects, I am challenging it and teaching about the real effects. She said that what we are doing is morally wrong. I am saying that what we are doing is also scientifically wrong.

Alexander also notes that some people use the remarkable success of some black professionals to claim that “the system” is actually blind to race. How do you feel about this myth, as someone who's had great success yourself?

I have a hard time arguing with stupid people. In the book I describe anecdotes, but they are backed up by empirical evidence. But if people are taking examples like, “Look at the president. He’s black. That is evidence that you all have overcome,” it’s hard to engage in a serious conversation with someone who has that view. When you look at the overwhelming evidence, the percentage of people in poverty who are black, the unemployment rates, incarceration rates, when you look at other indicators you clearly see that we have some problems in the country. And if people are not able to look at that in a smarter way, I don’t know what to say.

Based on your research and your experiences, what are your recommendations for how we should move forward with drug policy in the United States?

I have argued that we should decriminalize drugs. It’s not the same as legalization, which is what we do with alcohol. Under decriminalization, sales remain illegal, but the possession of drugs would not be punishable as a criminal offense. Instead, possession would be treated as an administrative offense, like a driving violation or parking ticket, so that people are no longer subjected to having a criminal record. Given that we make 1.5 million arrests a year for drugs, mostly for possession, I believe that decriminalization is the way to go.

A lot of people are skeptical about approaches like decriminalization at first, but once you explain it to them, they get it, especially in communities that are impacted by our current approach. I also think people should read "High Price" because we need a lot of remedial education about drug effects and drug policy. The assumptions about drug effects that have shaped our current policies are wrong. We need to have a discussion and understanding about these issues. That’s what I am trying to do.