Taking a page from the disgraced president (and Newt Gingrich!), Republicans are intent on destroying institutions 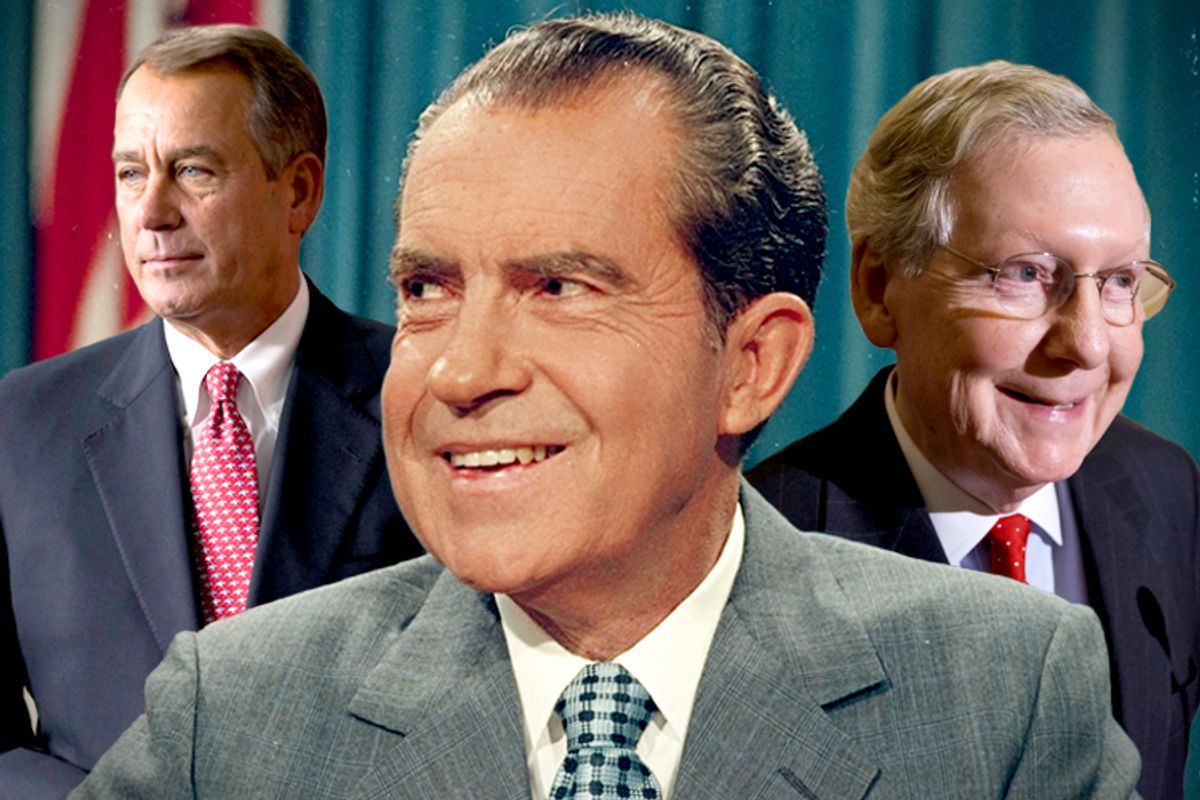 The current Republican Party isn't the party of Barry Goldwater and Ronald Reagan. It isn’t a conservative party. It’s the party, instead, of Nixon and Gingrich. And that’s why it’s a dysfunctional mess, and a problem for the nation.

I said something to that effect the other day, and a commenter got all upset about it:

The party of Nixon? The guy who created and implemented the EPA? The guy who normalized the US international relationship with China? The guy who intervened in escalating fuel markets to fix prices, in order to protect consumers?

They are so far away from Nixon's policies and governance.

I’ve seen this reaction before, and because it’s such an important point it’s worth spelling it out. It’s not about ideology. It’s not about specific policies. A healthy party, one that is able to cut deals and work with others, can be healthy even if their policies are far from the mainstream.

We can get at this a couple of ways. One is that everyone should be very careful about what "Nixon" did, as opposed to what the government did while he was president. Give Nixon the Congress and the policy environment of 1947 -- or 1997 -- and you get very different results.

But I suppose more to the point is that there's just no way to read the contemporary Republican Party as some sort of principled ideological party. It just isn't.

Or think about their convoluted path on healthcare reform over the last 20 years – how an outline originally concocted by Republicans as a reaction to Bill Clinton’s initiative, and eventually implemented in one state by a Republican governor and a Democratic legislature, became (once adopted by Democrats) the essence of tyranny.

And don’t even get started on Republicans and the federal budget deficit.

That’s not a principled conservative party.

As no one knows better than real hardcore ideologues, the ones who know well that George W. Bush and the Republican Congresses he served with were never “real” conservatives. They’re right about that! Even though most of those saying that now are wannabes who never dissented during those years.

Unlike those ideologues, I’m not complaining about pragmatism; I think ideological parties are a terrible idea in a democracy. But while they aren’t the ideal conservative party that some want, they’re certainly not a healthy (conservative) pragmatic party, either.

That’s where Nixon and Newt come in.

Both of these very successful (pre-disgrace, anyway) Republicans became national figures as conservatives. Neither, however, was a principled conservative. Nixon was covered above; Gingrich was a Rockefeller Republican when he first ran for Congress, and both of them shifted back and forth as they saw opportunities to exploit.

But that kind of opportunism isn’t what make Newt and Nixon stand out. No, what they have bequeathed to Republicans is a contempt for the regular norms and institutions of the American political system, along with a Leninist belief that contradictions must always be heightened. Nixon broke laws, to be sure, but other presidents have broken laws. What made Nixon different – what made everyone, including his own party, so eager to be rid of him – was that he refused to accept that others within the system, whether in Congress or the press or the bureaucracy, were as legitimate as the president. What made Gingrich different is his consistent strategy of tearing down institutions (the House, and then the presidency) in order to save them. For both, politics was never about the normal promotion of interests and reconciliation of differences, but instead, very simply, about destroying their opponents.

Because they are the party of Newt and Nixon, the principles that today’s GOP worships aren’t market economics or personal liberty; look instead at a “principle” such as a refusal to compromise.

Or brinkmanship as a principle. The quintessential GOP stance, in a lot of ways, is the current insistence by many in the party that they must shut down the government to prove they are serious about the Affordable Care Act. What makes it such a great example -- so much a Newt-inspired example -- is that they've been flailing around all year trying to figure out what to ask for when they blackmailed the nation over the debt limit and funding the government. And that half or more of the party is insisting on it even as experienced legislators and analysts tell them that it can’t possible work. Because as I said back in the spring, the faction that wants the shutdown isn't really sure about what it wants to demand; it's only certain that it wants to take hostages. Extortion for the sake of extortion. As principle.

It’s of a piece with the series of almost-shutdowns we’ve endured (all of them echoing the Gingrich train wreck of 1995-1996). With the debt limit showdown of 2011. With the explosion of the filibuster far beyond previous use in the Senate. With a series of “constitutional hardball” examples over the years. With the choice to attempt to undermine the ACA rather than fix or improve what they could, with the goal – the goal! – of causing as much policy failure as possible.

A party only does those things if its leaders and many of its members have taken as a principle Nixon’s standard operating procedure of treating the rest of the United States government beyond the White House as illegitimate; a party only does those things if it no longer accepts the basic constitutional constraints that most politicians, no matter what their views on public policy, have by and large accepted. And a party only does this if it believes, as Newt Gingrich did, that the best way to gain control of institutions is to first destroy them.

That’s the Republican Party we have. Not every single member of it, of course, but it’s a strong enough influence that it’s what really matters. And while I have no brilliant suggestions for how to do it, I do believe that the most urgent task facing the political system right now is to figure out some way for Republicans to shake off the influence of Newt and Nixon.