Richard Dawkins goes on another ignorant Twitter rampage. The ugly underbelly of his worldview is anti-Muslim hate 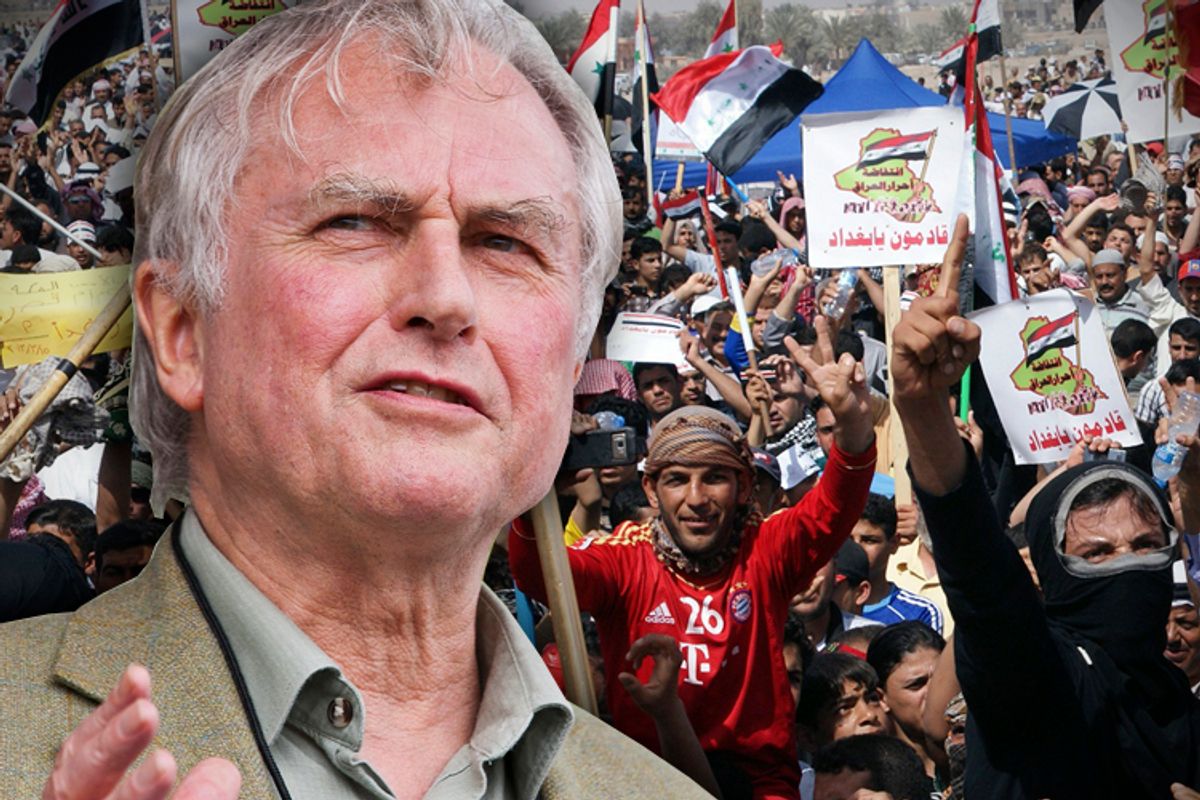 Richard Dawkins is at it again. And by “it,” I mean simple-minded anti-Muslim Twitter trolling. On Thursday, the professor and provocateur raised eyebrows when he wrote that, “All the world's Muslims have fewer Nobel Prizes than Trinity College, Cambridge. They did great things in the Middle Ages, though.”

You could almost hear the 72-year-old biologist exhale a sigh of pity as he fired off the Tweet. Oh, those poor Muslims. How great they once were!  Now, well, not so much. “A simple statement of fact is not bigotry,” he added.

Yes, the truth is that Muslims have received fewer Nobel Prizes than the sophisticated academic specialists at Trinity. But who in the hell cares apart from people like Dawkins who hope either to embarrass or discredit the faith group by pointing out such arbitrary things?

In March, I wrote a piece here at Salon that sparked a fierce debate about the so-called New Atheists and the way in which they use rational atheism as a cover for anti-Muslim prejudice. But in his rant this week (as well as in other recent Tweets), Dawkins poked holes in his own façade, showing that it is increasingly difficult for him to engage religious topics without eventually resorting to some good old-fashioned Muslim bashing.

To be sure, it’s always okay to critique religious beliefs. It’s healthy to do so and no religion should be immune from — or its followers resistant to — well-intentioned and reasonable inquiries about faith claims. But there’s a difference between problematizing a religion’s tenets and persecuting its adherents. There’s also a difference between raising legitimate concerns about doctrines, scriptures and the rationale of one’s beliefs, and hurling insults that shift the tenor of the debate into a machismo register better suited for high school locker rooms.

Earlier this year, when the University College of London hosted a debate on “Islam or Atheism,” Muslim organizers segregated the seating arrangements by gender. It was, without question, a poor decision, and one that many protested, including Dawkins. He responded on Twitter:

“Who the hell do these Muslims think they are? At UCL of all places, tried to segregate the sexes in debate between @LKrauss1 and a Muslim,” he railed.

Two minutes later: “How has UCL come to this: cowardly capitulation to Muslims? Tried to segregate sexes in debate between @LKrauss1 and some Muslim or other.”

It’s normative statements like that — not necessarily his view of the issue — that are problematic. When it comes to making claims about religions, especially Islam, Dawkins is quick to grab the biggest brush he can find and paint “the Muslims,” or “Muslims,” or even “Islam” with one broad stroke.

“I think Islam is the greatest force for evil in the world today. I’ve said so, often and loudly. What are you talking about?” he Tweeted to one follower in March.

The greatest force for evil? How is that even quantifiable and what constitutes evil? For a scientist, Dawkins rarely provides any qualification, context or evidence for his hypotheses. He doesn’t often give names or reveal identities that could help us better understand exactly whom it is that he targets. But that’s beside the point because to Dawkins, they are just “Muslims,” not fathers, sons, daughters, mothers, bankers, lawyers or doctors. They’re not informed by any other identity that makes them complex human beings; it’s “Islam” that always animates these faceless people.

Of course, it’s fine for Dawkins to “think” whatever he wants. He’s free, as we all are, to express his opinion on Islam or other religious faiths. And in a society that values free speech, he also has the right to say offensive things about those faiths if he so desires. The problem, though, is that Dawkins has long represented himself, and his beliefs about the world and its creation, as originating from an intellectual and scientific place. He’s an academic, an evolutionary biologist, an ethnologist and a former Oxford professor. Thus, some may consider his bellicose ramblings to be reflective of his studied background and thus more salient than the mouthy insults of Islamophobes like Pamela Geller or Robert Spencer, the latter of whom came to Dawkins’s defense, evidencing a weird alliance of uneducated anti-Muslim bloggers and erudite anti-Muslim scientists.

Sure, the Nobel Prize is an honorable recognition like no other. But it’s not insignificant that in Dawkins’s haste to come up with something cheeky to say about Muslims, he would use an accolade created by a Swedish philanthropist and awarded by an all-white committee of Scandinavians as a measuring stick for Muslim contributions in the world. It’s not like these decisions aren’t political or controversial or even imbalanced. After all, these are the folks that gave the 2009 Nobel Peace Prize to Barack Obama in anticipation of what he would do as president, which evidently involved the unprecedented use of drones to target and kill enemy combatants and American citizens, and the expansion a secret surveillance apparatus that monitors and collects the personal telephone and Internet exchanges of ordinary people.

Dawkins doesn’t mention that of the 10 Muslim Nobel laureates, six received the prize for peace. He’s too busy, instead, bemoaning what he sees as their lack of contribution to modern science (and their supposedly violent nature), supposing that it’s their religion that’s to blame for the deficiency. The idea that their religion could have possibly contributed to their peacemaking doesn’t occur to him. Nor does he consider the possibility that other factors in many Muslim majority countries — like education, poverty, unemployment, economic malaise, corruption and state-dominated institutions — are serious obstacles for advancement. Dawkins would likely insist that Islam, too, causes those woes, because for him, everything great about the West is the result of secularism and everything miserable about the rest is the fault of religion. In the end, his scientific method of comparison doesn’t pan out very well when it’s turned on him. Muslim Nobel Prizes to date: 10. Dawkins Nobel Prizes to date: zero. That too, is a “fact,” Mr. Dawkins.

The debate over New Atheism and Islamophobia often attracts polar extremes. At one end are those who claim that identifying prejudices towards Islam in the statements of people like Dawkins and calling them out in spaces such as this implies a love for, and defense of, everything related to that faith. At the other end are those who object to any critique of Islam and in knee-jerk fashion render any inquiry of the religion or its tenets as Islamophobic. Yet, it can be possible to detest discrimination towards Muslims and also disagree with some, or even all, of Islam’s teachings. It can also be possible to unpack and criticize Muslim positions on issues like women’s rights or minority rights or other topics without resorting to tired generalizations and stereotypes. Make no mistake; it’s not that Richard Dawkins doesn’t get that. Surely a man of his intelligence must. Rather, he has an agenda. It’s about time that the ugly underbelly of his rational atheistic disguise is exposed for what it really is.

Nathan Lean is the research director at Georgetown University's new project on Islamophobia, the Bridge Initiative. He is the author of three books, including, most recently, "The Islamophobia Industry."