I mother with my brain, not just my body 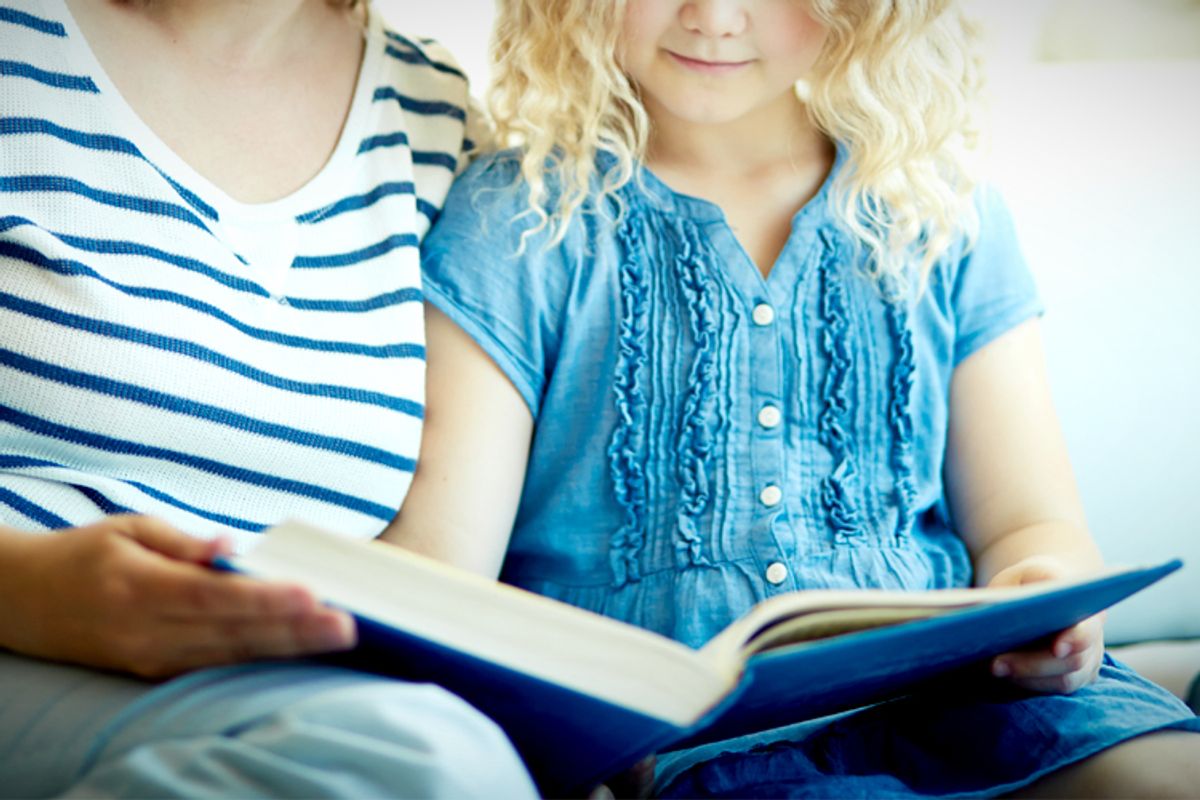 My husband was 50, I was in my late 30s. We had lived adulthoods that did not include infants, except as metaphors. And then like so many in today's America, we had a baby in later life.

It was a predictable shock. She had been expected, after all. At first, she seemed like a foot-and-three-quarters-inch tall inconsolable alcoholic. And then a small (and very pretty) pig rooting for truffles. I wanted to feel the BabyCenterDotCom-like rapture -- my small"‘pineapple-size fetus," as they'd put it, was now "a bundle of joy," as they'd say. But it was hard to appreciate all that, to see my daughter, through the screaming fits. To tell the absolute truth, I was a little frightened of her vague newborn gaze.

I couldn’t wait until it fixed upon something. I had lived through language and culture, you see, far more than nature. Even as a child, I had walked down streets reading novels, waiting for my feet to get stuck in tar as I crossed the road, like the absent-minded animal in a Richard Scarry kid’s book.

For the rest of my life, most conversations were about films and books.

Perhaps it was problematic that I lived so much less in my body than I did in my brain, so much more in culture than in, say, the mineral facts of infancy: the physical intimacy, the jerky arm movements, the exquisite yet anguished cries. But I wasn’t going to change my preferences overnight.

This desire to connect through artifact and parlance were par for the course in my mother’s mothering. She was a Second Wave feminist, after all, who clattered to work each day in Bandolino boots when I was a toddler, her college students’ many blue books in a folder under her arm. She never spoke of my birth or any of the physical demands of childcare, even when I was an adult: These processes held little interest for her. (Workplace labor for her was feminism, birth labor not so much.) Sure, she was sometimes working on her book or articles when I was a child and I wanted her attention instead. But in the end, it was her heartfelt relationship with culture, one she transferred to me, that has been her greatest legacy. She related to me as a young child through her passion, art, taking me every weekend to museums in my stroller to learn about Pointillism and co.

Today, though, not loving the physical aspects of mothering, from pregnancy to breast-feeding onward, can be a new source of guilt. In some pockets of upper-middle-class America, a discourse of naturalness has attached itself to motherhood.

Connecting — or yearning to connect -- through culture rather than nature may now seem strange, as mothers' physical acts are emphasized and lionized, from giving birth at home to refusing painkillers as they dilate to whether they hold out against a C-section.

I am thinking of the well-known birth plan of the former talk show host Rikki Lake, who co-created a famous home birth film, "The Business of Being Born." Lake epitomizes the machisma of the natural mother when she says in an interview of the med-free home birth of her son: "And I also had a goal ... to have this experience, to get through it, so it was really magical." (Of course, there are a few countervailing voices as well, and not just Elisabeth Badinter: books on Unnatural Women, Good Mother Myths, et al.) The lines between what was traditional and “insider” motherhood and “outsider” motherhood seemed to be shifting by the day — I realized that when I was reporting my book "Republic of Outsiders" and I spoke to a group of women who performed DIY home births, sometimes entirely alone and without medication.

I listened in disbelief to Lake’s and other bravura accounts of forgoing painkillers, wondering if I should be ashamed of how much I had loved my epidural: My husband read "American Pastoral" to me while I was in labor. I saw my gender -- and myself -- as something of a construct. Like anyone who read one too many women studies’ books in the 1990s, I aspired to both "do" and undo my sex. That was part of why I was uncomfortable with what I perceived to be a free fall into the purportedly real. Unnatural constructs -- cities and medical pain management -- have always seemed pretty good to me.

The first of many ways to reach my daughter, you see, was not through the promised and militated wonder of my rosy-hued aureole snapping into a perfect latch. Instead, it was via the black-and-white pictures – black and white op-art -- I pasted on the wall above her changing table. When she saw them, and the tile coasters with similar black-and-white geometries, her body flexed, limbs waving. Nothing before had equaled her fascination at witnessing a black outline of a jumping jack on a white background, or a black-and-white checkerboard. Her happiness at encountering an image easily rivaled that of any enthusiast and certainly any critic. In a moment, I understood her, or at least part of her. That was when our love story began in earnest.

Always, I am eager to return to the keyboard and the bookshelf. And now I find myself again and again near the bookshelf of my beloved daughter. Yes, I run around with her in the grass but I also read her books for hours and I am much happier doing so. I think of cultural artifacts as glue when I play the "Pulp Fiction" soundtrack and Chromatics, pretending they are kids' music — I don’t think ignoring Dan Zane is child abuse. I know that people like me have been parodied in  "Portlandia," with Carrie and Fred’s parental characters insisting that their kid appreciates Dinosaur Jr. guitar solos. But I still do it.

I compulsively track down and order out-of-print children's books from the '60s and '70s, some of which I had myself as a child, including early out-of-print editions of the British series "Topsy and Tim." They are full of milkmen and dustmen. The European Community is only a twinkle in the commonwealth’s collective eye. Jet travel is still romanticized. The book where they visit a “flower factory” in Amsterdam is a particular favorite. There are also weirder ones, like the 1970s German books that explore the themes of chance involving a fruit seller vending plastic apples to unwitting customers. My daughter has many, many other books but she keeps asking for these throwback titles, chanting their names so that I’ll read them again and again, maybe because she can tell how much I like sharing them with her.

In the dusty books I read my daughter there are postmen, but at least for now, there are no princesses. And my daughter and I are for hours floating in a sea of language and pictures, together.

Alissa Quart’s nonfiction book on renegade Americans, "Republic of Outsiders," is out this week. Some of the material in this essay appears in the new British essay collection "Fifty Shades of Feminism."