What happens to a municipal worker's pension when a city goes bankrupt? Unlike banks, they won't get bailed out 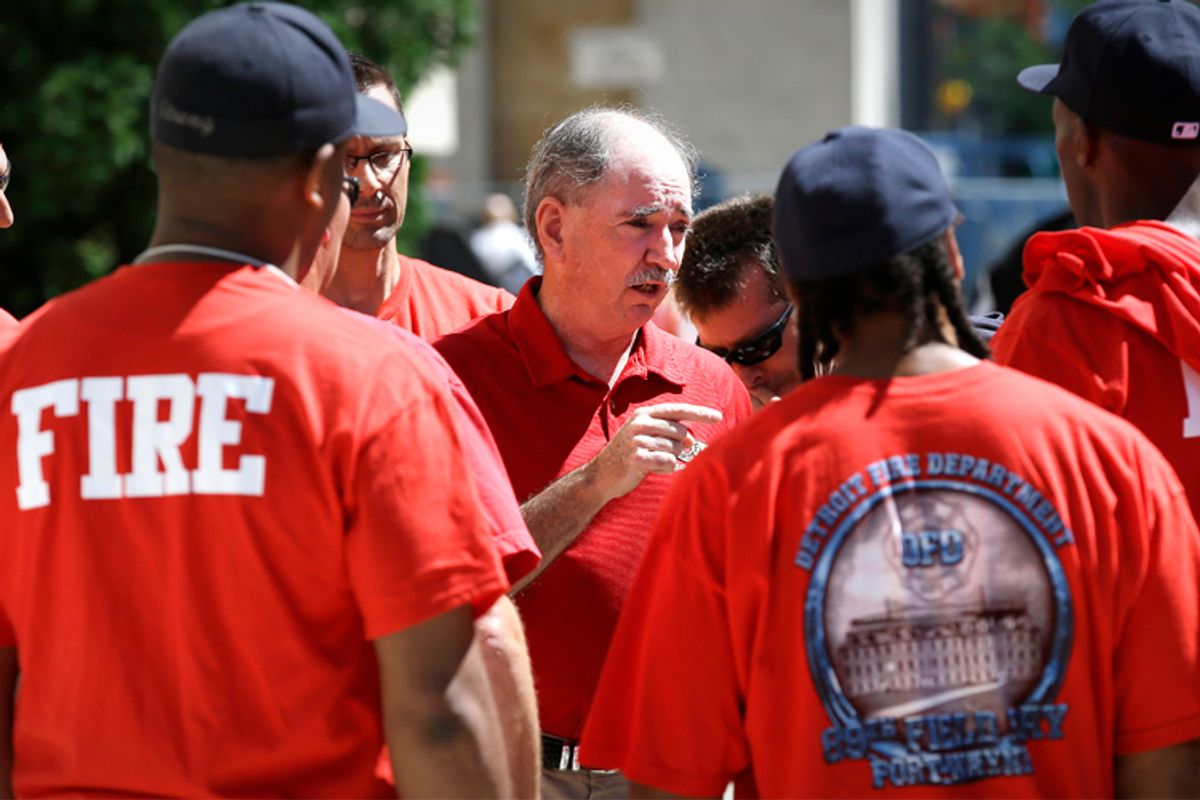 We are now on the cutting edge of a wave of municipal bankruptcies fueled by pension obligations that cities cannot afford. Cities made workers promises in good times based on optimistic assumptions that did not always hold true.

Yet it is far from clear that bankruptcy provides any solution to municipal pension problems. No city has ever reduced its pension obligations in bankruptcy without pensioner consent. While municipal bankruptcy has been around since the 1930s, pension-driven bankruptcies are a new phenomenon. Few of the local government units that have filed for bankruptcy since the 1930s have even been true municipalities. Most have been sewer, water and hospital districts plus oddballs like county fairs and NYC Off-Track Betting or the Las Vegas Monorail.

The cities that have filed for bankruptcy are generally tiny towns that find themselves in economic distress for mundane or ridiculous reasons, not because of pensions: The town treasurer absconded with a million dollars; the city’s tax on strip clubs was an unconstitutional violation of freedom of express; the state shut down the illegal speed trap the town was operating on the interstate. Nor were the largest and most famous municipal bankruptcy cases resolved to date about pensions: Orange County, Calif., and Jefferson County, Ala., both ended up in bankruptcy because of bad investments in financial derivatives. Pensions were one of many factors in New York City’s financial crisis in 1975, but the bankruptcy law at the time made filing impractical because it would have necessitated the city first soliciting the consent of thousands of unknown holders of its bearer bonds.

The new wave of municipal bankruptcies — Detroit, Stockton and San Bernardino being the leading cases — are all set to test the question of whether pensions can be cut in bankruptcy, particularly in the face of state laws protecting those pension obligations. If municipal pensions can be cut in bankruptcy, we should expect to see more cities eyeing bankruptcy as a possibility, and other cities using the threat of bankruptcy as negotiating leverage to wring concessions from pensioners and employees.

Chicago, for example, after undergoing an unheard of three-notch downgrade on its municipal debt, is struggling to find a way to handle its municipal debt without taking the politically unpopular step of raising taxes. Thus far the city has engaged in a questionable campaign to sell off all sorts of public assets, such as its parking meter revenues for the next 75 years. There’s only so long, however, a city can “burn the furniture” to stave off its financial problems.

Pensioners are not well positioned for this contest. They have little negotiating leverage. Bondholders can threaten the city with higher borrowing costs going forward or even being shut out of capital markets if they aren't repaid as promised. There is a lot of bluster to bondholder admonitions, but pensioners cannot credibly make similar threats of withholding labor.

Pensioners also make a politically attractive target for distressed municipalities. It is easier politically to cut the pensions of a limited number of employees than it is to cut services for everyone or raise taxes on everyone. In Detroit, this argument is framed as pitting the interests of 20,000 employees and retirees against the future of a city of 700,000. Pensioners get demonized as the holdouts preventing the recovery of the city.

What really distinguishes the impact of bankruptcy on public pensions from private sector pensions is that the public pensions are uninsured, whereas there is a solid pension insurance system for private sector guaranteed-benefit pension plans. Since 1974, federal law has required private employers with defined-benefit plans to maintain certain funding levels for their pension plans and to pay insurance premiums to a federally run insurance fund called the Pension Benefit Guaranty Corp. (PBGC). In exchange, the PBGC provides partial insurance of the private sector defined-benefit pension obligations — up to nearly $57,500 annually for a 65-year old retiree. The PBGC provides a critical safety net for pension obligations (although not for other retiree benefits, such as healthcare). The lack of PBGC insurance for municipal employees is particularly acute because many do not participate in Social Security; their retirement security rests solely on their uninsured pensions.

Thus, if a private firm files for bankruptcy and leaves behind an underfunded pension plan, the PBGC steps up and assumes the pension obligations. Public sector pensions, however, have always been excluded from PBGC coverage. As a legal matter, mandating federal insurance for local government raises federalism problems. More important, though, when the PBGC was created, state and local governments lobbied to be exempt because they did not want to be required to comply with plan funding requirements or to have to pay PBGC insurance premiums. Municipalities and states argued that they were fundamentally different than businesses because they cannot be liquidated and have a virtually guaranteed source of revenue through taxation. We’ve since learned that cities — and potentially states — can go broke. The power to tax does not guarantee sufficient revenue. Raising tax rates won’t do the trick for Detroit, as much of the population simply doesn’t have the money to pay, and those that can pay may move.

Expanding PBGC coverage to public pension plans would not have to cost taxpayers anything. The PBGC is not taxpayer-funded. Instead, it collects premiums and invests them, just like a mutual insurance company. Premiums would not have to be particularly onerous because only a small number of municipalities would have pension funds making insurance claims in any given year. Yet being forced to pay insurance premiums would in turn impose discipline on municipalities: If premiums were based on the size of a pension’s obligations, it would also act as a disincentive for offering lavish promises of future compensation as there would be an immediate price tag for doing so. And it is hard to imagine public pension insurance creating a moral hazard: No municipal government wants to flirt with bankruptcy, even if some of the cost will be borne by others.

Mandating PBGC insurance for local governments would also help reduce the pension underfunding problem: Local governments could be compelled to properly fund pensions upfront, rather than being allowed to kick the can down the road. Mandating pension insurance requirement would impose costs on responsible as well as irresponsible municipalities, but it is important to recognize that city economies are often liked, regionally and across state borders: Detroit’s problems threaten not just its suburbs, but all of Michigan.

Municipal finance problems are not due only to pensions. The collapse of the housing bubble seriously damaged many cities' finances. Property tax and income tax revenue suffered, while municipalities were saddled with increased costs of tending to abandoned properties. While the banks that fueled the housing bubble got bailed out, local governments had to bear the costs of the crisis on their own. Now, with cities in their weakened state, the fair-weather pension promises that cities made to their employees are coming home to roost. It seems that unlike banks, cities will not get bailed out. The banks came first in the bailouts, and again they will come first in the bankruptcies. Yet that doesn't mean that public employees should not be without the social safety net enjoyed by private sector employees. Congress should extend PBGC coverage to public pension plans.

Adam Levitin is a Professor of Law at Georgetown University.