How would George Orwell, calculate his modern day expenses in the post paperback age? 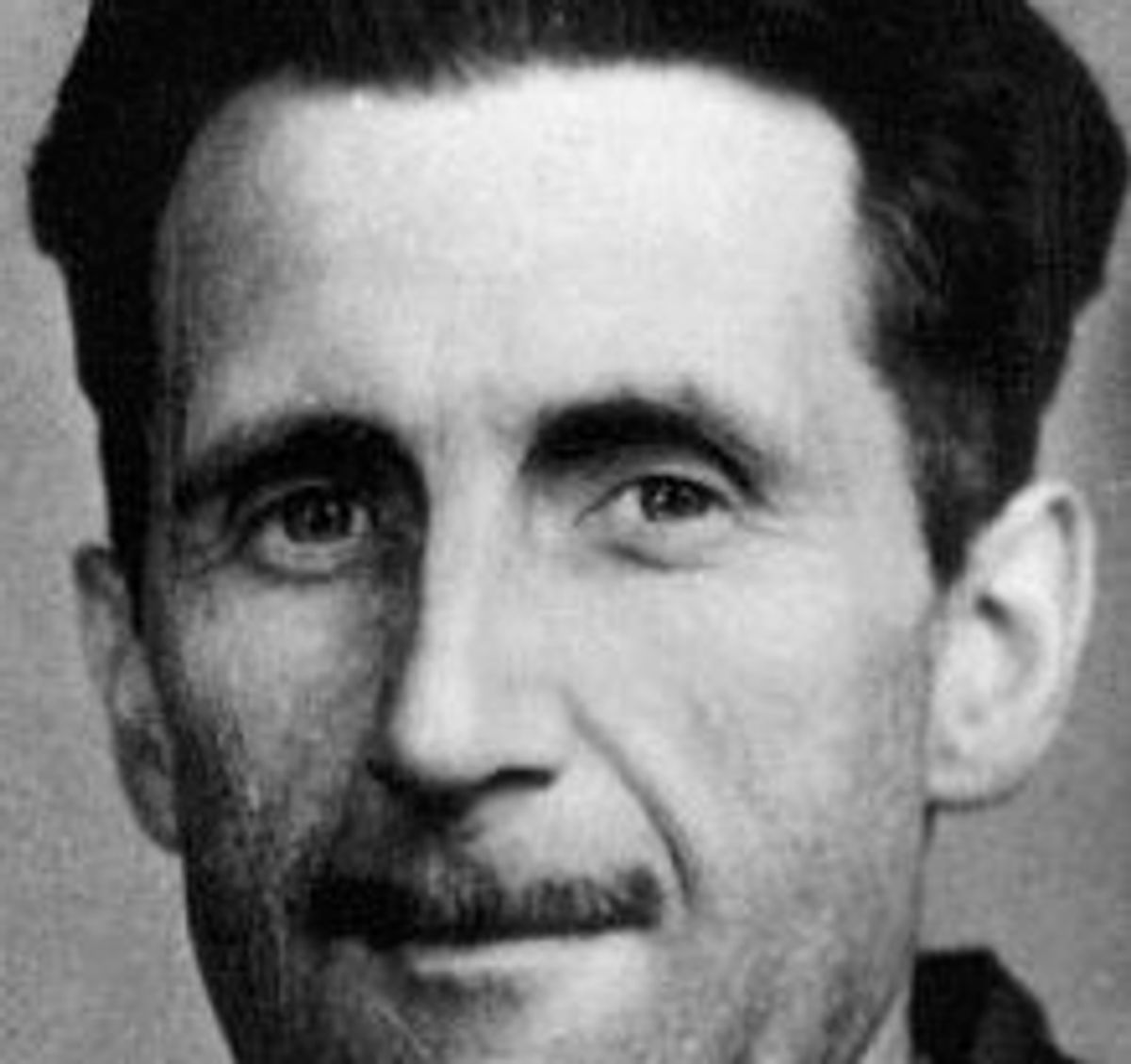 A COUPLE OF WEEKS AGO I walked into a bookshop in a shopping mall in central Istanbul. As I browsed the shelves I was unaware that the day marked the 110th anniversary of the birth of George Orwell. Though Orwell is one of my favorite English authors, my mind was occupied by quite a different fact — namely, that since buying a tablet computer in December last year, the amount of money I have spent on printed books has decreased dramatically. With this decrease followed a decrease in the pleasure I took from purchasing them. In the good, old, and expensive days of literary shopping I would choose books from the shelves, walk to the counter, pay in cash, and head to a coffee shop with my purchases — the favorite ritual of my teenage years. I would open the first book’s cover, accompanied by a cigarette and a cup of strong Turkish coffee. These would always be very physical experiences: I remember the crinkling pages, the waft of the smoke, the oils of the coffee. Afterward my hands smelled of nicotine; my mind hungered for more books.

Lately, however, this ritual has all but disappeared from my life. My reading materials have been thoroughly digitized. I have lost touch with both the printed book and the banknote. In the long chronicle of my reading habits I am currently living through the age of the .EPUB file and the plastic card. It is a chilly period, I must admit, a dark age, and at times it makes me yearn for the good old days of my undergraduate life. In those not-so-distant days I didn’t need to calculate or economize. I didn’t have to pay the rent; as for my insurance premiums, they were taken care of by my parents. Thanks to them I could spend all my money on books and cigarettes, giving little thought to the price I paid for them.

Engulfed in this nostalgia, I decided to break from my current habits. I purchased a couple of print magazines and books: the last issue of The New York Review of Books cost me 30 liras (around 15 U.S. dollars — I am not sure why it is so expensive here), and the Penguin Great Ideas edition of Orwell’s Books v. Cigarettes went for £5. The book was beautifully designed, with a cigarette stub circled by an ashtray that reminded me of my teenage years. I immediately fell in love with it. Paying for a text I knew I could find for free on Project Gutenberg only served to increase the pleasure.

I carried my beloved purchases to the coffee shop adjacent to the bookshop. In a kind voice I requested a cigarette from the young girl at the neighboring table and started placing my reading materials on my lap one after the other. (What a shame you can’t do that in your tablet; I hate seeing my new books, magazines, and albums shelved without any ceremony; they just appear, and, when you choose to delete them, disappear without any ado.)

It was so like the good old days! I even handed the cashier some banknotes; she handed me tangible products in return! In this euphoric mood I began reading (for the first time, I must admit) the classic Orwell essay “Books v. Cigarettes.”

Orwell wrote this short piece in 1946. In it he described how a newspaper editor friend of his had learned from factory workers that they found books too expensive. Could this be the reason why England’s working classes didn’t read as much as the British left desired? Orwell’s curiosity was aroused. He decided to find out, in a rather accountant-like manner, whether reading was indeed an expensive habit.

To that end he calculated his expenditure on books over a period of 15 years. He took note of them (“bought,” “given to me or bought with book tokens,” “review copies and complimentary copies,” “borrowed and not returned,” “temporarily on loan”) and learned that over this course of time he had purchased a total of 442 titles. Since he had roughly the same amount of books stored in another place he doubled the figure for a final calculation. “[I]t seems that I possess altogether nearly 900 books, at a cost of £165 15s,” he wrote.

To fully estimate his reading expenses he added to the sum the cost of newspapers and periodicals. Orwell typically read two daily papers, an evening paper, two Sunday papers, a weekly magazine, and “one or two” monthly magazines. He added these and the cost of his library subscriptions. In the end he concluded that his “total reading expenses over the past fifteen years have been in the neighbourhood of £25 a year.”

In contrast, he had spent £40 a year on cigarettes. His reading habit was cheaper than his smoking one. The workers had had little reason to complain about the cost of books, he decided. If they were not reading literature it was probably because they found books boring — not because they couldn’t afford them.

I gave up smoking almost a decade ago. But since last year, I have also largely given up buying printed books. So I occupy a slightly different position. I spend £0 on cigarettes and £0 on printed books. In place of those I allocate my ever-moderate financial resources toward ebooks, magazine iPad editions, and, last but not least, liters of lattes and Americanos — useful, but costly, friends of the freelance writer.

And, thanks to technology, it is considerably easier for me to calculate my expenditures, and more accurately so. The digital store account of my tablet computer and the loyalty card records of my favorite coffee shop help me list exactly how much I spend on ebooks and lattes. Because my reading habits are under constant surveillance by my tablet computer, I know what I have read, when, and at what cost. My tablet apps tell me I have read 24 books and paid a total of $250 in the first half of 2013 (not a particularly busy reading period for me, since I am writing a new novel). In the same period I have continued my digital subscriptions to three periodicals: TheNew Yorker, the London Review of Books and The Guardian. They have cost me around $135 total, for access over a period of six months.

My e-reading expenditures, then, cost me around $385 — less than my coffee expenditures for the same period, which were in the neighborhood of $1,800. My e-reading habit thus costs only a fifth of my drinking one (maybe a little more when I’m not working on a novel). For every dollar I spent on the likes of Tolstoy I spent four on coffee beans.

Of course, not everyone spends 10 bucks on coffees every day. And with more national newspapers choosing the subscription model for their websites, many readers are paying more for their daily intake of news. So those numbers (£0 on cigarettes, £0 on printed books, and around a fifth of a coffee budget spent on books) are by no means representative of the majority of readers in Turkey, let alone the world.

But though we have different reading, drinking, and smoking habits, the question Orwell asked in his essay has a universal appeal. While I was counting my own nickels and dimes, I realized that others have done the same before. I came across an essay entitled “Books v. cigarettes: 63 years on,” in the November 2009 edition of Structo magazine. K.J. Pratt, the author, is a smoker, although he says he doesn’t “smoke quite the amount as Orwell.” He smokes “around ten a day, or three-and-a-half packs a week.” Pratt spent £930 on cigarettes in 2008. His total expenditure for books was £235 a year. He writes:

[A]s an addiction, reading is around four times cheaper than smoking cigarettes (£930 vs. £235). A book habit in Orwell’s days cost 60% that of a smoking one. The odds have improved for the readers (or worse for the smokers, depending on how you look at things).

He then compares books to electronic games, Blu-ray films, and other forms of 21st-century entertainment. In all of those areas reading comes out as the cheaper habit. According to Pratt’s calculation, books entertain us for an hour at a cost of £1.75; only computer games can beat that price (Max Payne 2 costs £20 and takes 36 hours to complete, so it works out at £0.55 per hour).

I clearly remember this scene from my childhood days: my father inclining toward his notebook, making the household budget, calculating our expenditures on every imaginable thing. At the time it seemed like a summary of middle class existence. I imagined the bohemian life to be its polar opposite: a life less ordinary, a life in which one doesn’t need to calculate.

Less than two decades later I find myself behind a desk, calculating as meticulously as my father. Orwell and Pratt had done the same. Taking stock of expenditures now seems to me a working class, not a middle class, activity. A posh English writer would never think of calculating how much money he spent on books, let alone comparing it to his smoking or drinking habits. A bohemian, too, would object to the vulgarity of it. I can hear the imaginary bohemian as he quotes Oscar Wilde: “Nowadays people know the price of everything and the value of nothing.” For many, the calculative mind attests to an unartistic nature. If you stop to calculate the price of art, there is nothing artistic about you. Only a writer immersed in the material and economic aspects of literary production would come up with the idea of listing the costs of his book purchases.

But Orwell was exactly this kind of a writer; Pratt and I are, too. We calculate because we need to.

I chose the tablet computer as my primary reading device not out of boredom with the printed page, not out of the allures of cutting-edge technology, but out of an economic necessity. The tablet is no more trendy or posh, at least in my mind, than the hard copy of a book, but it is cheaper.The New Yorker’s yearly international subscription fee is twice its digital fee ($120 compared to $60). And most books, without the costs of printing, are the same. Had I purchased printed copies of my books and periodicals, they would have cost me considerably more than their digital versions. Perhaps I couldn’t have afforded them. I certainly couldn’t have afforded them all.

So I am concerned about how much I spend on reading, rather like those workers in Orwell’s piece. There is nothing wrong in my concern, necessarily, except that it may be what’s destroyed the pleasurable book-purchasing ritual of my younger days.

Perhaps I even quit smoking out of the same calculating spirit. A book costs a little less than a pack of cigarettes, as Orwell has shown (this is still the case, at least in modern-day Istanbul). I might have assumed that if I quit smoking I’d live longer and own more books. I know many bookworms who have done the same.

The beauty in “Books v. Cigarettes” arises from the fact that Orwell makes his calculations on our behalf. He considered himself a part of the working class. He feared that workers would erroneously think books were too expensive to read. If workers calculated the costs of their reading, the tediousness might spoil the pleasure. So he did the boring work for them.

Why did such a sophisticated essayist of the English language spare so much time calculating his expenditures? He might have believed this concern for his reader to be a part of the writer’s responsibility. His socialism manifested itself in a sophisticated concern for the reader’s budget, whose importance we act on, yet rarely acknowledge.

Kaya Genç is a frequent contributor to the Los Angeles Review of Books.