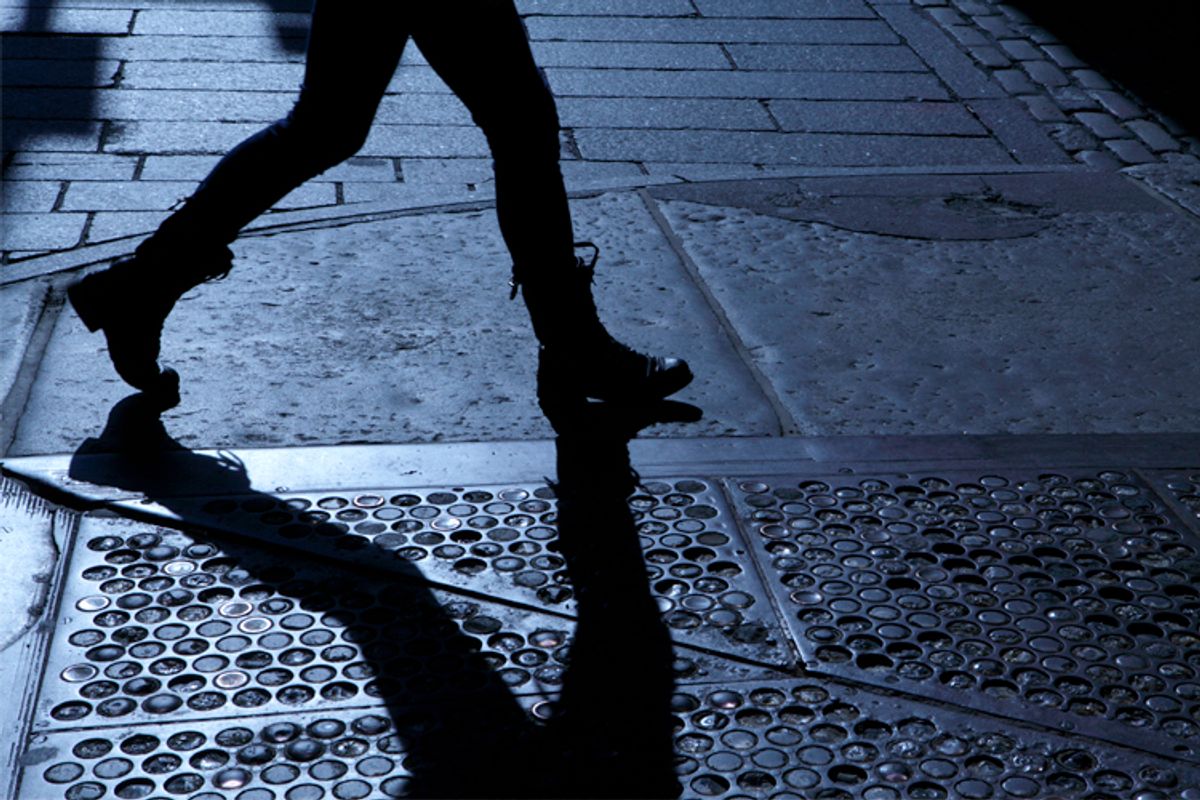 Men, have you every made fun of girls and women you know for going to the bathroom together? This habit is often high on the list of “girl” things men claim not to fathom.

But here’s a simple and easy fact that can dispel a lot of confusion: Women regularly take steps to avoid the threat of rape, even if we don’t explicitly describe them as such.  We train girls early to do things in groups -- yes, including going to the bathroom -- so that they aren’t vulnerable to sexual assault.

Ask yourselves, men, do you feel safe on your neighborhood streets? Do you choose where and when you exercise or shop or commute carefully?  Do you have parking strategies, like not parking near vans? Do you change several times before deciding on certain clothes,  even though you like them? Do you use your keys as a weapon or take other similar measures? Have you considered specialized fighting techniques?

These questions will be familiar to most women, but they don't really address the most common type of sexual assault: that perpetrated by an acquaintance. Some women are indeed assaulted by strangers, but almost 75% of rapists are known to their victims.  The habits we teach girls for avoiding rape reinforce misleading and ultimately dangerous ideas about strangers in alleys. If “don’t get raped” lessons were genuinely meant to help people assess risk and avoid assault, we’d teach girls and boys (because yes, boys and men can be victims of sexual violence too).  Instead, these rules reinforce a gender hierarchy dependent on girls being vulnerable and boys being invincible. Teaching girls to constantly modify their behavior in order to avoid stranger rape is a form of social control.  And telling girls and women it's their responsibility to avoid rape doesn’t stop rape, it just perpetuates rape culture.

But even when we know the statistics, it’s hard to walk away from a lifetime of acculturated fear.  And it turns out that fear is really expensive.  Here are five ways that modifying our behavior to avoid stranger rape cost us:

First, it costs us time and limits our movement in space. We face challenges in everything from daily commuting to traveling to far-flung places.  We go out of our way regularly to find safer walking routes, buses, parking spaces, and exercise spaces. We don’t take shortcuts cavalierly. Aside from these daily "inconveniences," whether we do it for work or pleasure, we have different travel maps. Our freedom to explore is seriously impaired.

Second, it costs money, because it’s expensive to avoid rape.  For example, if a woman can afford it, she will take taxis at night, instead of walking home when she’d like to. Women may join gyms for safety reasons: 24% of American women avoid recreational exercise outside to avoid “being bothered.” That's as if the entire population of Canada didn't ever go outside for sports.  Women who have the means to do so may feel they need to live in neighborhoods that are more expensive, even though they might be interested in other neighborhoods or would rather reduce their housing expenses. And when we travel, we have to spend more money on transportation and guides.

Third, it can limit our employment opportunities, because some jobs can become very dangerous in an instant if you are a woman. Just ask reporters and activists. Or closer to home, ask female taxi or truck drivers how their habits differ, and how their earnings are affected. The military? 26,000 people were raped last year, numerically more men, proportionately, more women. One female vet called rape “part of the job description.” In addition, women who deal with regular threats of violence, like stalking and harassment, are more likely to have to take time off of work.

Fourth, it curtails our speech and public engagement. As a result of being taught to "be safe" and "not get raped" many women silence themselves out of fear. They stop writing about certain topics, or in certain spaces. They don’t confront harassers, they disengage from political and public speech. Free speech requires freedom from coercion and the threat of violence -- in our society, women often don't have those freedoms.

Fifth, it costs us psychic energy. Living like this often feels like the mental equivalent of having a low-grade fever for life, even if we never actually experience sexual assault. And if a woman is assaulted, she's frequently blamed for not doing a good enough job avoiding it, which can make the experience even worse. And she may experience a whole range of post-traumatic symptoms.

All of this is why going to the bathroom together isn't just a fun girly thing that women do. The reality is that moving in packs, taking more time, spending more money, seeming less adventurous, isn’t a luxury. It’s a tax.