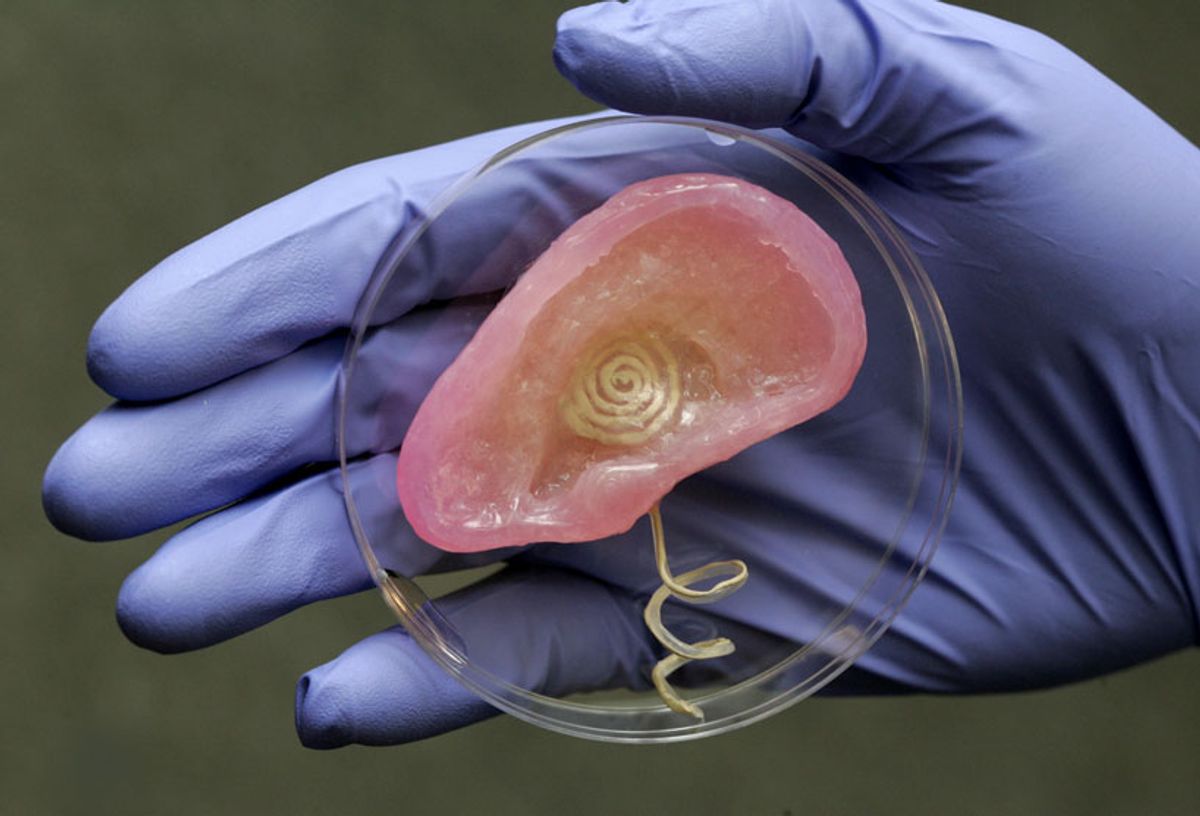 Lab-made organs could do more than just serve as ready options for patients in need: with the right blend of biology and materials science, they might even be able endow people with superhuman abilities.

That's what researchers at Princeton University see as the future of tissue engineering, and they believe 3-D printing is the way there. Michael McAlpine and members of his lab recently reported that a 3-D printer could build a bionic ear capable of detecting frequencies a million times higher than the normal range of hearing.

The ear demonstrates how 3-D printing can seamlessly bring together electronics and biological tissues. Normally, these materials don't play well together—one is rigid and fractures easily, while the other is soft and flexible. But with 3-D printing, the two can be fabricated together, says McAlpine. "It's a way you can naturally intertwine everything together into a three-dimensional format," he says. This could help researchers make body tissues with integrated devices that can monitor health, or even build cyborg organs that augment conventional senses.

The team started with an ear because the shape is difficult to re-create with traditional tissue engineering. Also, much of an ear is cartilage, which lacks blood vessels—structures that elude tissue engineers (for now).

To build the bionic organ, the printer is guided by a computer model of an ear to which the team added the model of an internal electrode coil. Layer by layer, the machine alternates among three "inks": a mix of bovine cartilage-forming cells suspended in a thick goo of hydrogel; silicone, to encase the cochlea-shaped electrodes; and a suspension of silver nanoparticles. The silver nanoparticles are packed tightly so that the cochlea-shaped coil can conduct electricity. "It acts as a metal, but because they are nanoparticles, you can print them in a way that you couldn't normally print a metal," McAlpine says.

Printing takes about four hours. Then the ear is bathed in a nutrient-rich broth so that the cells can grow, produce collagen and other molecules, and replace their original surroundings with cartilage.

With its fully embedded coil, the bionic ear can detect and transmit radio signals—but not sound waves. McAlpine says that functionality could be added to future models by integrating piezoelectric materials, which convert mechanical energy into electrical energy. One day these devices could help a person hear through the same mechanism used to connect cochlear implants, or perhaps provide a sixth sense of electromagnetic reception.

Next McAlpine wants to expand the range of objects a 3-D printer can produce. "There are significant challenges," he says. But with higher-resolution printers, he thinks, his team will be able to introduce higher-end electronics.

Beyond enabling biological tissues to incorporate materials with exceptional properties, 3-D printing could address a tissue--engineering challenge: how to grow organs with blood vessels. "Vasculature networks have an incredibly complicated geometry," McAlpine says. Such a breakthrough would be key to printing organs that contain blood vessels, such as livers, kidneys, and hearts.