State Rep. Kathy Hawken talks to Salon about the threats -- and thanks -- she gets for being pro-choice in the GOP 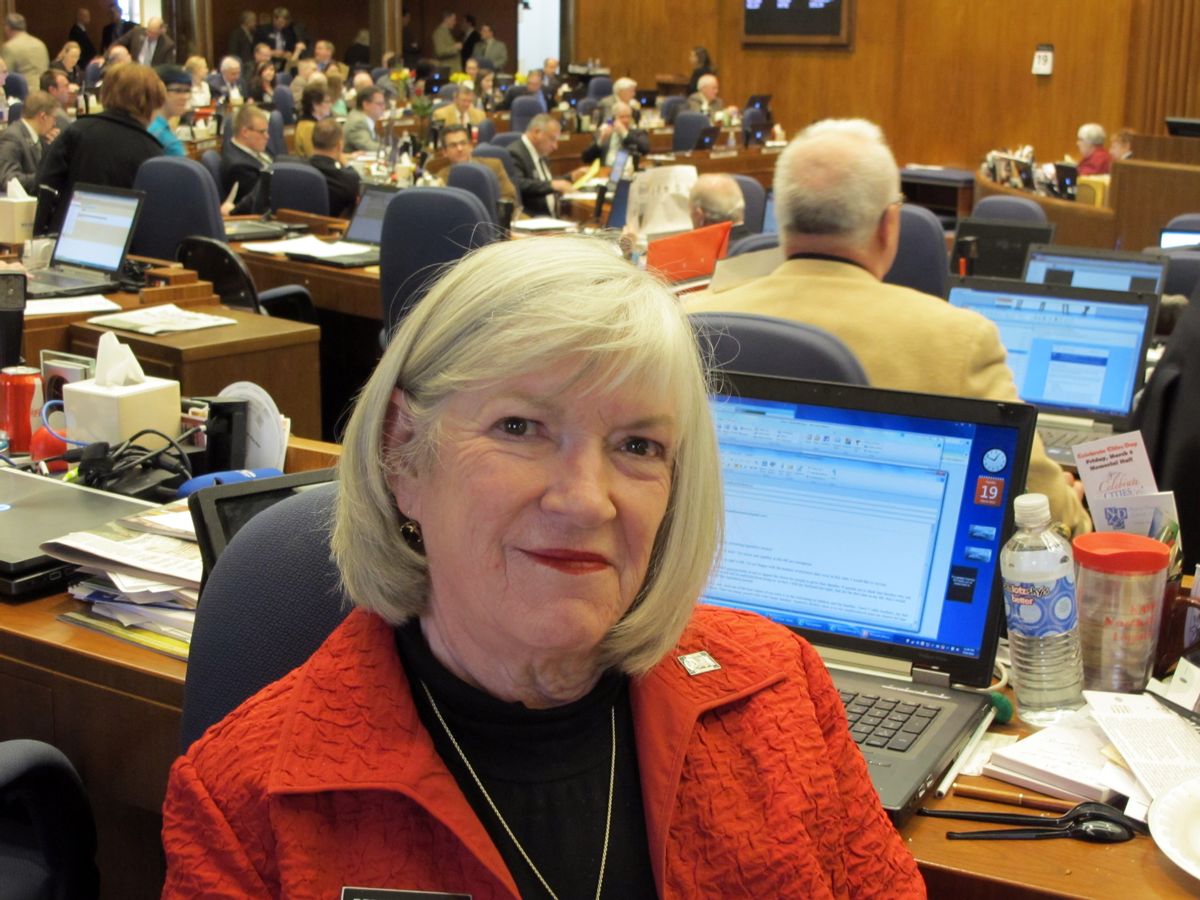 While a majority of her colleagues in the North Dakota Legislature were working furiously to advance the single most draconian pre-viability abortion ban in the country (and a series of restrictions aimed exclusively at shuttering the state's last remaining abortion clinic), Kathy Hawken was working just as hard to stop them.

She rallied with Planned Parenthood in Bismarck, debated passionately with the Republicans behind the measures on the House floor, and warned gravely that these laws had "stepped over the line." Or, more specifically, Hawken said that her party had stepped over the line.

Hawken has served as a Republican member of the North Dakota House of Representatives for the past 17 years, and has been a vocal advocate for women's reproductive rights since the very beginning of her political career. That didn't seem so strange to her two decades ago, but today she knows she may be a contingent of the GOP heading towards extinction.

Salon spoke with her about growing anti-choice extremism in North Dakota and the rest of the country, and why she's chosen to stick it out with her party through the worst of it.

What happened in North Dakota this year?

Within the Republican Party, it is not particularly easy to speak out on this issue, which is for me very sad and very contrary to what the Republican Party has always stood for to me, which is personal responsibility. That’s right in the little card that says, “I am a Republican because.” So I find this distressing that there are members of the party -- people who are in control of the Republican Party currently who feel this is the direction they should be taking. Now, these same people would not vote for a seatbelt law, or a stricter D.U.I. law, but they will vote to curtail women’s health care.

There is no thought given to whether they are interfering with the doctor-patient relationship, whether there’s a problem with the woman’s ongoing health. Those things are totally thrown out with the kind of legislation that’s been put forward this year. It’s terrifying. And if women were doing this to men, it wouldn’t happen. Or for that matter, if men had babies, it wouldn’t happen.

And there’s so much more to women’s health than simply having children. What is happening now goes well beyond that. They’re really putting women back centuries. It’s terrifying.

You mention that your colleagues in the state House aren't even willing to pass a seatbelt law, but I also know you have tried and failed, repeatedly, to rally your party to advance a prenatal health care bill. How could something like that fail in a Legislature that professes to support babies?

Yes, in several sessions -- it wasn’t just one session. We have tried to increase prenatal health care and it doesn’t come out of committee with a due pass recommendation, and of course does not pass on the floor.

How do you explain that kind of disconnect? I know you’ve said in the past that your colleagues in the party seem really eager to get babies born, but don't care much what happens after they get here.

I wish I had the answer to that. That to me is what is so terrifying. People say, "No, this is not a war on women," but I don’t know how else to explain it. It is a control of women. And there seems to be no -- literally, we cannot pass prenatal health care, we could not expand in our state children’s health care. Now that hopefully has gone away, but we couldn’t do it prior to the Affordable Care Act, and the preschool education, child care immunizations -- those kinds of bills do not move forward.

We couldn’t put $300,000 into helping developmentally disabled people in our state get access to extended care hours, but we could fork over -- and it’s going to be millions in North Dakota, because we have several of them -- legal fees to defend these blatantly unconstitutional laws in court? For a good fiscal conservative, it’s really a ridiculous road to go down. If you tick off the things on the list -- the financial piece, the personal piece -- it’s amazingly disconnected from reality.

What are your constituents saying to you about these laws? There seems to be a real disconnect between what lawmakers are doing versus what priorities their constituents seem to have.

I have received 250-300 postcards that have been sent all over the country saying thank you for speaking out. And I got the cutest letter from a 92 year-old woman who hand-wrote it to tell me that she had worked in the clinic as a volunteer for a number of years. And she said people do not understand what happens and why choice in these situations is so very, very important. I’m saving it. It’s wonderful.

And, in other cases -- I don't know whether I should use the word “threatened,” but there was a local talk show host who said he’d make sure I was never reelected. But my support has come from people in North Dakota who feel that women should have the right to make these decisions -- that it’s a personal decision. Either way, however you feel, it’s a personal decision, and the support has been truly heartwarming. Both men and women saying thank you for speaking out. So that’s a plus.

Now, certainly not everybody feels that way, but even the nuns in the convent in my district say I’m doing good work.

Well, the nun endorsement is a pretty good endorsement to have. Now I know that you aren't planning to run for reelection next term, but if you were, do you think that, given the current state of the party, being a moderate, pro-choice Republican is a viable political position in 2013?

Here’s the thing: I’ve been doing this for 17 years. My voting record is 100 percent. I’ve been speaking every year on women's rights, every time we’re in session, and there were women who came before me and I know they’re sitting on my shoulders [like guardian angels]. One of the first was one of my high school friend’s mothers, way early in the process. But I haven’t ever been a silent person on this, so the reelection piece isn't about my record. Really, it's just because of the age I currently am, and because the bills we have this year, I think, in North Dakota, were so abhorrent.

And everything that's going on with the focus on 20 week abortion bans. Well, if you really look at the numbers, there are so few of those [abortions] performed each year.

So that’s a red herring. What is the big push on this? This is not our economy. This is not creating jobs. This is interfering in people’s personal lives. Why is this an issue that has become such a hot button in state Legislatures? And the fact that our Congress is doing it, too, is really awful. They have lots of work to do, none of which they’re doing.

Have any of your Republican colleagues in the North Dakota Legislature tried to explain this to you? How was the six-week ban debated? What do you think is driving the anti-abortion fervor in your state?

Reelection. It’s a conservative state. But I think they’re wrong. I think the vast majority of people here are not -- that’s not their main issue. That’s not what they want us to be doing. Certainly, there’s a percentage -- there’s a percentage of people in my district that, I’m sure, think I’m going directly to hell. But there also are a lot who say thank you very much for giving us a voice. My concern is that we don’t remember this until the next election cycle.

Do you think these laws are going to be something that will come back and bite some of these politicians in the next election cycle, because of how extreme the party's stance has become?

I certainly hope so. That’s my wish, but people can sometimes have a very short memory. So we’ll just have to wait and see what happens.

It’s sad. I have had a pretty good number of people say to me, “I no longer have a party.” These were good Republicans who supported the party and the candidates, and they’ve just reached a point where it’s gotten so radical that they just don’t want to be a part of it. They can’t find a place where they fit. I mean, Barry Goldwater has a great quote about how when the ministers take over the party, you know you’re in serious trouble.

Have you ever considered switching parties or a third-party option?

I’m not sure what Olympia Snowe is doing right now, or Christie Todd Whitman, but whatever it is, I wanna be part of their group. Great ladies.

You still have a lot of work in the Legislature ahead of you, but it's your last term. Do you have any parting words, or future parting words, to your fellow Republicans?

There is a certain group within the Republican party that feels they are right -- on whatever the issue is, they always have the answer. And that’s where I think we’ve made the mistake: because they don’t have all the answers. Nobody does.