He will be an awful senator 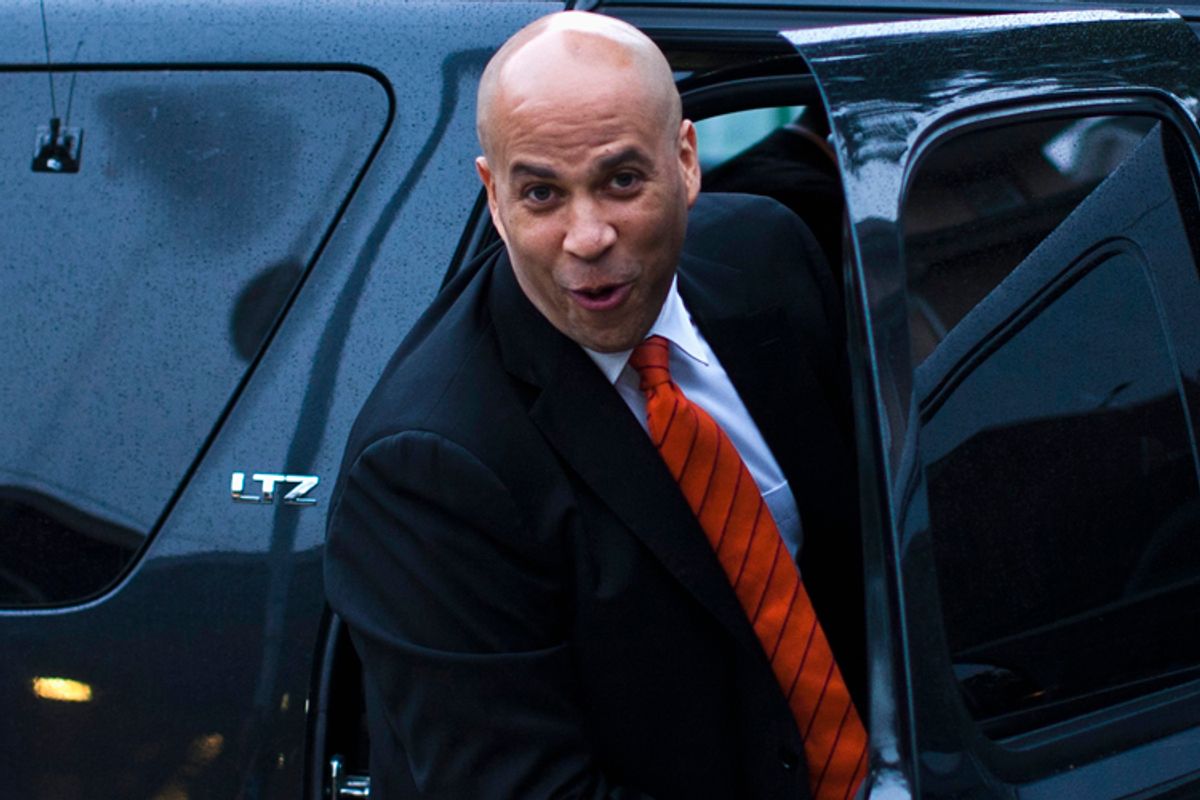 Today New Jersey Democrats will decide who will be their nominee for the United States Senate. The winner of today's primary election will be the heavy favorite in the general election. If any New Jersey voters are reading, and they have not yet voted, consider this a desperate plea: Don't vote for Cory Booker. He's going to be a very annoying senator.

But he's also an avatar of the wealthy elite, a camera hog, and a political cipher who has never once proposed anything to address the structural causes of the problems he claims to care so deeply about. He represents the interests of both Wall Street and Silicon Valley, two very prosperous industries full of incredibly arrogant rich men who believe that the world's problems would be solved if arrogant rich men exactly like themselves were given free rein to make as much money as possible by any means necessary. They see, in Booker, a peer -- a smart man with the right qualifications and the correct worldview. Booker and his crowd believe that the charity of the benevolent elite -- people who know they are rich because of their innate skill, their brilliance, their work ethic, everything besides fundamentally inequitable distribution of resources and opportunities for economic advancement -- is the only acceptable and effective means of addressing the needs of the lower orders.

Cory Booker became a millionaire because this is how the economy works for people of his class: Rich people give other rich people money to do nothing, simply because they "deserve" it. He is the worst sort of Democrat, and Democrats should be doing everything in their power to wrest control of the party away from people like him.

But that is why Cory Booker is bad as a phenomenon. What about his fitness for the specific job he is running for? It is, admittedly, probably not the job he was hoping for. Governors get to have more fun. Time's Jay Newton-Small says Booker would miss retail politics and direct constituent interaction once he's a senator:

Senators don’t fix potholes. Never mind flaming buildings–they rarely even kiss babies. Senators spend their days in meetings: with lobbyists, with interest groups, with other senators, with the administration, with fundraisers and with their leadership. They’re inside operators.

OK, but how do we actually think Booker spends most of his time? Fixing potholes personally, or attending meetings with rich, influential and important people? (Like Jeff Zucker's teenage son?)

In many ways, Booker is perfectly suited for the United States Senate. He won't be expected to accomplish anything. He will have so many more opportunities to spend time with even more rich people with elite backgrounds and worldviews similar to his. He will have much more access to television studios and Sunday shows and cable news cameras.

He will, in short, be the worst kind of senator. The kind that has no power and no real desire to exercise power on behalf of the people the senator ostensibly represents, but the kind that always expresses opinions on television about whatever national issues people on television care about that day. He will be on "Morning Joe" and "Meet the Press" constantly. He has even already said that he might consider Rand Paul and Ted Cruz as models for how a freshman senator might make "big marks." Not "big marks" in the sense of any sort of lasting legislative legacy, because Ted Cruz does not care about legislation or policy, but "big marks" in terms of media attention and stunts designed to appeal to a core of supporters who prefer their senators brash and loud. Another one of those senators will not help anything.

It's not like there aren't any other options. Rush Holt would be a fine senator. He's an actual physicist, which is neat. He cares very strongly about global warming, which is probably the single most pressing issue of our era. He will probably not use the Senate seat as a stepping stone to the White House, which means he may actually stick around long enough to gain seniority and someday actually achieve things.

So don't vote for Cory Booker.