I married a misanthrope

I always knew Pete didn't like people. But I never realized what a problem that would create for me 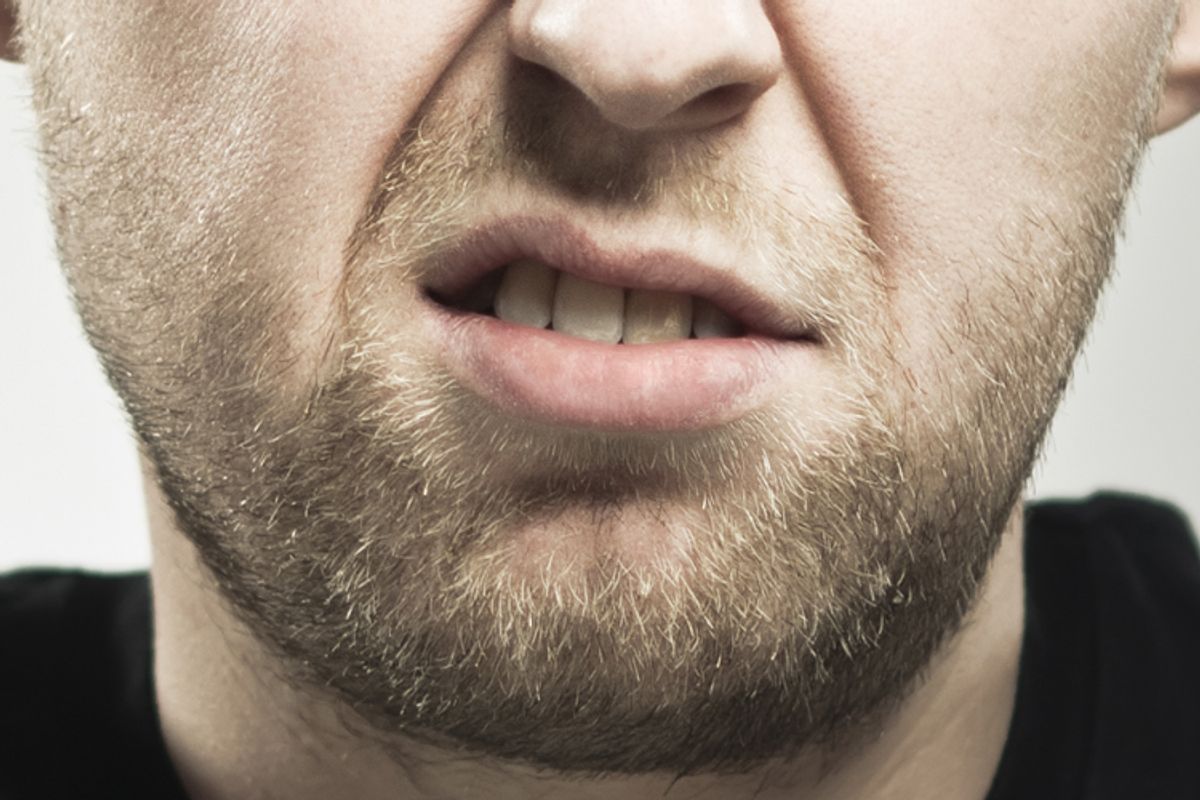 Last Christmas, a friend invited our family to an annual holiday party. My husband and I don’t go to many social events, and I was looking forward to this one. When I mentioned the upcoming date to my husband, I expected him to grumble and groan as usual, but his response surprised me. “I’m not going,” he said flatly. “You can go. I’ll stay home with the kids.”

“The kids are invited,” I replied. “It’s a family thing. They’ll have fun.”

“But you’re invited, too. You’re in my family. We’re married.”

He reminded me how much he hated parties, how awkward he always feels. He told me to tell our friends he had something else to do.

At that moment, something gave way inside me. The whole exchange just felt too familiar, like we were acting out a tired script. I can’t do this again, I thought. I can’t do this every time I want to be around people.

I told him there was something very wrong with him, with our lives. I told him I was sick of going places without him, that sometimes it felt as though I didn’t even have a husband, and that he couldn’t keep using the kids as an excuse, that he was going to turn them into hermits like himself.

We didn’t speak for a couple days.

“Why did you say those horrible things?” he asked me. “You knew I was like this at the beginning.”

Pete and I met in the fall of 2001. We were both starting at the Iowa Writers’ Workshop. He claims that our first conversation took place at a party for incoming students. He says I wasn’t especially nice to him. I have no recollection of this. I do remember that the first apartment I moved into in Iowa City was a strange, dim, oddly carpeted, probably structurally unsound place and when I described it to a few classmates over lunch at the Hamburg Inn Pete offered to help me move out. He had a Chrysler Town & Country minivan. As it happened, I did, too.

By the spring we were essentially living together, and in July we got engaged. I was 24 and convinced I had found my soul mate in this fellow writer who was smart beyond description, who was equally adept at expounding on Polish film and Saul Bellow’s books and baseball, who opened doors for me and wrote me love notes and could at times make people laugh so hard they snarfed beer or boxed wine out of their noses. He had a deep appreciation for the absurd. He read a story I wrote my second semester in which two characters who are having an affair pause their liaison to watch a documentary on doomed Zeppelins. He laughed and laughed when he read it. “This is the most wonderful thing you’ve ever written,” he told me. He woke himself up one night laughing, uncontrollably, and told me he’d been dreaming about aliens marrying cats. He was just so freaking bizarre. And I loved him for it. I loved his weirdness, and his kindness, and his dry, cutting humor. He is the one for me, I thought, even if he had a few quirks, a few idiosyncrasies that might have given me pause.

I write “says,” not “said,” because this was not a statement made once in a single conversation, but again and again, over the course of 12 years. I’m sure he must have said it first, though, at Iowa. I would have wanted to go to some get-together. “You can go,” I’m sure he said. “I don’t like people.”

Over time I’ve learned that “I don’t like people” is Pete’s code phrase for his social phobia, the stress he experiences when he has to deal with new people or unfamiliar situations. When I ask him to explain it to me, the picture becomes clearer: “It’s just different for me than for other people. I have to consciously think about things that come naturally to you — making eye contact, when it’s appropriate to make a joke or not, how to read someone’s body language. [In certain situations] I really don’t like people because they do things that I don't know how to respond to. They’re unpredictable and irritating.”

When I tell him to be serious, he says he is serious. “It’s just the way they interact with one another, talking and connecting and whatnot. Picture yourself in a room with two other people and they're discussing quantum mechanics in Urdu and only switch to English to tell unfunny jokes.”

This conversation took place a few days ago, and though it’s the first time he’s ever described to me in such detail what his social anxiety feels like, I suppose I’ve always known it existed, and I think in some ways it was even one of the things that attracted me to him.

I remember a family wedding we attended together before we were engaged. It was a traditional, ostentatious, Jewish wedding — a giant hotel convention room bursting with overpriced floral arrangements and overfed guests, and we were sitting at our big, white tablecloth table, watching as the several hundred people around us danced and laughed and joked and hugged and wished each other mazel tov, and Pete turned to me with a completely serious expression, an expression devoid of even the faintest flicker of a smile, and said, “This is the worst place on earth. We’re in it. Right now. No, it’s not even earth. It’s hell.”

I laughed, but also, my heart beat a little faster.

He was honest, I thought. He had no tolerance for bullshit and ceremony and small talk. In some ways, I respected that. I was attracted to it. And also, it was flattering to be one of a very select few on someone’s list of bearable others, to make the cut and thus be needed so intensely. If the price I had to pay was a more limited social life, then that was a compromise I was willing to make.

We got married. We moved around the country. We were poor and jobless. Instead of a social circle, we got dogs. We moved to Chicago, where he was from, reconnected with old friends from college and graduate school who lived in the city. We had a son, then a daughter. And with each passing year, with each incremental movement deeper into domesticity, it seemed Pete’s social anxiety worsened, and his willingness to be out in the world diminished.

In response, he began encouraging me to do more things on my own. I went to writing residencies for a few weeks each year, both to have time to myself to write but also to make new friends and to have the chance to socialize without worrying about how he was managing. Early on, during one of my first trips, I was sitting at a communal patio with four or five people, everyone chatting about what they’d accomplished that day, and I joined in the conversation, and it was just so easy and pleasant. And yet I had this strange, guilty feeling that by simply being social for a few days on my own, I was leaving him behind. Pete assured me this was not the case. He understood I needed more from other people than he did -- more time with them, more shared experiences. He only wished that, in return, I would accept the narrowness of what he needed: me, our kids, our dog, and time by himself.

“That puts a lot on you,” a friend said when I told her about this conversation. “And the kids and the dog. To be a person’s entire world is a heavy burden.”

But another friend saw our situation differently. She tried to appear sympathetic when I told her about Pete’s misanthropy, but then started laughing. I asked her what was funny and she said, “The whole thing. Because of course, you don’t like people much, either. It’s one of the reasons we’re such good friends. You’re judgmental, and I mean that in the best possible way. We’re told it’s good to make judgments about everything else: music, food, politics, clothing. Well, why the hell not judge people? People can be irrational and ignorant and irritating. You don’t really like people — most people — any more than Pete does. You’re just better at playing the game.”

I was skeptical at first, but then found myself thinking back to the years before Pete. It was true that for much of my life I’d defined myself by a desire to get away from others. As a teenager I’d longed to get my driver’s license so I could get away from my parents. Then I’d longed to go to college to get away from the people I’d called my friends. In college, I’d gone abroad to get away from a campus where I felt I didn’t fit in. And I started writing fiction, at least in part, because it was a way to feel like I was around people, to feel the energy and hum of others’ inner lives, without the real-time frustrations and difficulties of actual relationships.

So maybe my friend was right. Maybe my falling for a self-proclaimed misanthrope wasn’t an accident. Hadn’t I spent the first phase of my adult life searching for, longing for, that perfect partner in flight, a fellow misfit with whom I might make an island for two.

How much then, could I really blame Pete for my social unhappiness? I found myself thinking back to that holiday party. Why, I wondered, hadn’t I simply gone to the party by myself? It had seemed so important at the time that we go as a couple, that we do things as a couple. In part I attribute this importance to wanting to spend time with him. But was there also a part of me that needed Pete (and his misanthropy), that felt unable to navigate social situations as an autonomous being or to be happy and at ease with others, alone? I thought back to the first party at Iowa where we met, how Pete always said I wasn’t nice to him. As a single person I was terrible at parties, nervous and awkward and painfully self-conscious. I never knew how to stand or float or mingle. I smiled too much or too little. Sometimes, I’m told, I scowled. With Pete, I didn’t have to do any of that. With him, I was the social one.

I’d been focusing so closely on Pete’s social anxiety that I hadn’t noticed how closely it mirrored my own, how in some ways, not liking others made us love each other more. It may sound like a sad swath of common ground to share with a life partner. But then again, I wonder if there isn’t something slightly misanthropic about all romantic love. Everyone’s seen it happen: a bunch of people hanging out, everyone enjoying themselves and happy to be part of the group, and then two people hang back, become distracted by each other, linger on the edges, maybe disappear. Intense adolescent friendships dissolve at the first flutterings of the loins. Serious relationships draw us away from the circle of friends that seemed so adequate, so fulfilling. Marriage cements these inward movements. Children draw partners closer, but they can also draw you further away from the friends and lives you once knew. I wonder if all love affairs, all marriages, all lifelong partnerships, aren’t in some ways a turning away from the world. “You,” we say when we let ourselves fall for someone, not them, not the others.