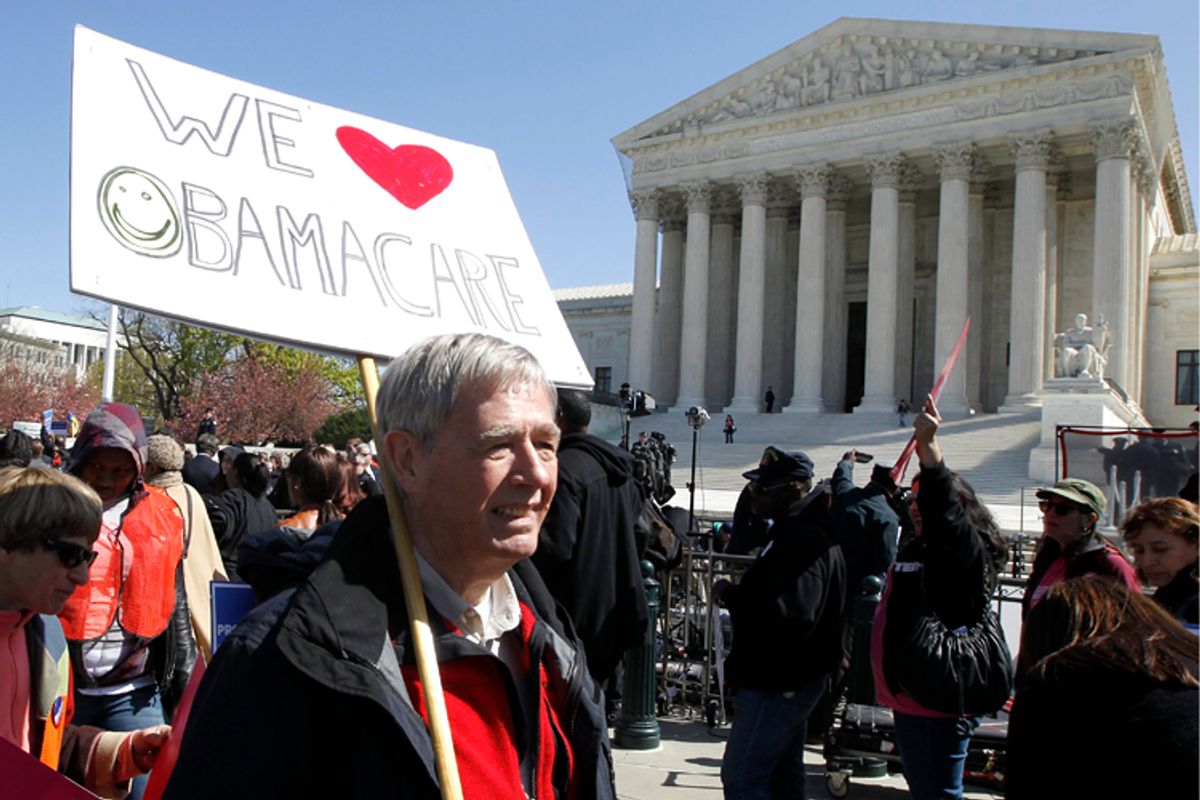 Heritage Action, the activist wing of the conservative Heritage Foundation, is out with a new poll today that's getting some favorable coverage in the mainstream political press. According to Heritage, the survey shows that the GOP shouldn't fear a government shutdown over Obamacare defunding. But there's a catch.

The background here is that a group of conservative senators, including Ted Cruz, Mike Lee and Marco Rubio, are trying to push Republican leaders to demand that Congress defund Obamacare in upcoming appropriations battles , even if it means forcing the government to shut down. Heritage supports the effort, so it took the poll to try to steel the spines of Republican leaders.

"Americans -- including 57 percent of independents in ten critical congressional districts -- favor defunding Obamacare," said Michael Needham, the CEO of Heritage Action. "House Republicans should be much more concerned with the fallout of failing to defund Obamacare than with the imaginary fallout of doing so."

What Needham fails to mention, however, is that even this push poll that dramatically oversamples Republicans (more on that in a minute) finds respondents are more likely to say that the Affordable Care Act should be kept than scrapped -- and that a plurality would blame Republicans if the government were to shut down.

Only 44.5 percent “oppose the health care law and think it should be repealed," while 52 percent either support the law as is or have some concerns, but say they think implementation should move forward. And asked whom they would blame if "there was an impasse between president Obama and Congress on whether to continue to fund the health care law, and that impasse resulted in a partial government shutdown," the top response (28 percent) was Republicans in Congress. The next option, Obama, got 21 percent of respondents.

As for Heritage's sample, which NBC calls voters from "10 relatively competitive congressional districts," and Heritage says represents “the American people” as a whole -- not so much.

Josh Dorner of the Center for American Progress Action Fund -- Heritage Action's ideological rival -- cries foul. He sent over the partisan breakdown of each of the 10 districts and noted that every single one leans Republican:

The poll even asked respondents directly for their party affiliation. Not surprisingly, there were almost 10 percentage points more Republicans (41.8 percent) than Democrats (33 percent). That looks even worse when you consider that more people identify as Democrats than Republicans nationwide, and by a margin of 7 percentage points, according to the latest Gallup survey. That means that Heritage's poll is arguably oversampling Republicans by around 15 percent.

One could further take issue with a poll that asks respondents leading questions like, do you think Congress should "halt funding for the health care law before provisions take effect, to make sure they do not do more harm than good?"

And the key question of the survey -- would you support a government shutdown to defund Obamacare? -- is comically euphemistic, calling a hypothetical shutdown a "temporary slowdown in non-essential federal government operations, which still left all essential government services running."

And yet, despite oversampling Republicans and asking misleading questions, the poll still finds that pluralities favor keeping Obamacare and that Republicans would bear the brunt of the public's wrath if the government shuts down.