A new strategy emerges to keep foreclosure victims in their homes: Buy their mortgages -- and write them new loans 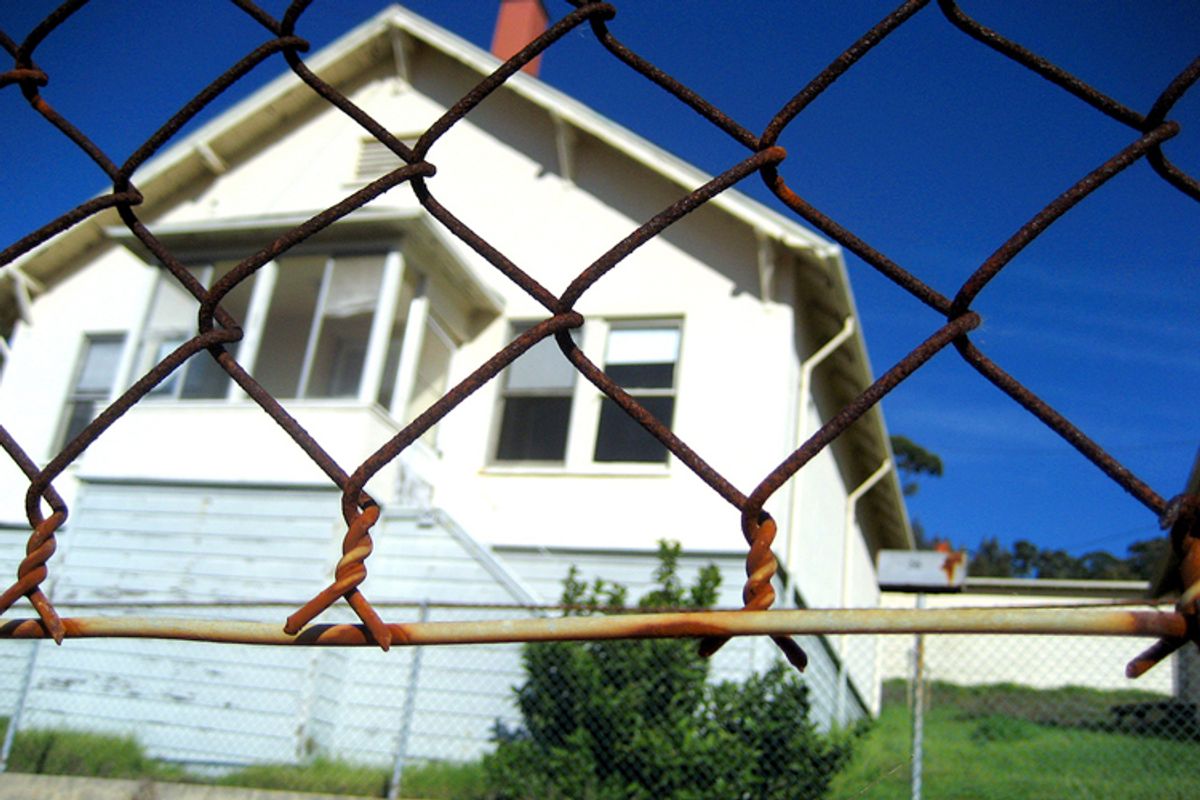 Major cities and some wealthy suburbs may have seen a recovery in the housing market, but between the coasts and in smaller towns nationwide, the flood of underwater homeowners continues.

Take Richmond, Calif., for example, where a staggering 46 percent of homes remain “underwater,” meaning borrowers owe more on the mortgage than the house is worth. These communities have needed a solution for years to prevent successive foreclosure waves and save their neighborhoods from a spiral of blight. And maybe they've hit on something.

"The banks aren’t helping us, so we’re stepping into the void and making it happen ourselves,” said Richmond Mayor Gayle McLaughlin.

McLaughlin became the first U.S. mayor to take steps to use eminent domain authority -- seizing mortgages from the lien holder and selling them back to the homeowner at an affordable rate, giving them the principal reduction that will allow them to stay in their home over the long term.

Other cities have flirted with the controversial strategy, which uses capital funding from a for-profit private investment firm called Mortgage Resolution Partners, but Richmond has actually made purchase offers on 624 loans. The servicers had until yesterday, Aug. 13, to agree to the heavily discounted price, which MRP and Richmond determined through a third-party appraiser. No one has agreed to the terms, and so Mayor McLaughlin will go back to the City Council to get approval to begin the eminent domain process. Other cities are watching, seeing if this can be a national model.

But the mortgage industry has decided to make an example of Richmond, prolonging the fight and preventing relief for borrowers. Investor groups representing the nation’s largest holders of mortgage-backed securities, including government-sponsored entities Fannie Mae and Freddie Mac, filed a federal lawsuit last week against Richmond, arguing that the eminent domain scheme is unconstitutional.

Eminent domain seizures of private property must have a public purpose and must offer just compensation to the property owners. The investors allege in their suit that preventing foreclosures is not a valid public purpose, and they say that the compensation they’re being offered is not just.

The latter point can be argued, as the offers are very low. For example, on a mortgage worth $300,000 where the real property is only worth $150,000, Richmond offered $120,000 in compensation. Then, they plan to help refinance the borrower (probably using a Federal Housing Administration loan) into a new 30-year loan with a small slice of equity, for around $145,000.

Complicating this is the fact that, of the 624 loans Richmond has offered to purchase, 444 of them are performing mortgages, where the borrower is current on their payments. Being underwater does put these families at risk of future delinquency, especially if they run into hard times. And many of these loans have interest rate resets or balloon payments down the road that will make it hard to stay current. So there’s reason to price in the potential for default somewhat. But investors assert, with some merit, that if the borrowers have been paying for years, the fair value of the mortgage is simply the full value of the mortgage.

“You look to the borrower payment stream as the primary source of value,” argues Yves Smith of Naked Capitalism, a critic of the Mortgage Resolution Partners approach. “These are borrowers who are clearly committed to keeping their homes and have income to do so.”

With 223 of the loans in the scheme current, Mortgage Resolution Partners and Richmond will have a tough time claiming the investors will get just compensation, particularly under California’s property-owner-friendly eminent domain laws. In fact, the investors allege they will lose $200 million on the handful of loans in Richmond. And MRP must get the loans at that heavily discounted rate for their scheme to work, and to reap a profit.

Ultimately a judge will decide this, but only after perhaps years of litigation, defeating the purpose of providing an urgently needed solution for borrowers whose struggles could reappear at any moment.  The mortgage industry has united to fight this and will spend whatever necessary. Moreover, conservative lawyers are licking their chops at using this case to roll back what they see as an unconstitutional expansion of eminent domain, particularly the Kelo v. New London ruling of 2005. The Federalist Society held a call last Friday, focusing on the compensation issue, where NYU professor Richard Epstein responded favorably to suggestions that this case could roll back Kelo. The worst-case scenario is that this well-intentioned plan becomes counterproductive, and harms municipal efforts to improve cities through eminent domain.

If firms like MRP really seek to benefit communities through local principal reduction schemes, instead of using the eminent domain power they can simply buy the mortgages outright. One financial intermediary has been able to make this work on a small scale. Boston Community Capital, a nonprofit, launched what it calls the Stabilizing Urban Neighborhoods Initiative in 2009.

The SUN Initiative targets borrowers in default or foreclosure rather than current underwater loans, working with the lender to buy out the mortgage and then refinancing the borrower with an affordable payment.

“We said to lenders, look, you’ve got a mortgage at a bubble price, we’ll pay you the market price and keep the homeowner in the home,” Elyse Cherry, CEO and president of Boston Community Capital, told Salon. “Rather than destabilizing neighborhoods, work with us.”

Through the SUN initiative, the firm has been able to purchase 270 mortgages in the Boston area, raising the capital through individuals and foundations, as well as borrowing. On average, the homeowner winds up with a principal reduction of around 40 percent, financing at a 6.375 percent interest rate. While this is higher than the average mortgage rate, the homeowners they work with, either in default or foreclosure, would have no opportunity to get credit otherwise. The new, affordable mortgage allows the homeowner to clean up their credit score and rebuild equity, ultimately enabling them to refinance into a lower interest rate and save even more money.

Careful underwriting has ensured that the situation works for everyone involved. The lender gets paid off with the market price, more than they would in a foreclosure sale. The borrower gets a loan they can afford. And the community gets much-needed stability.

In the four years of the program, just one of the 270 mortgages has landed back into foreclosure, and the redefault rate is a low 2 percent. For context, redefault rates for the oldest loan modifications in the government’s HAMP program, most of which were not principal reductions, are at a stunning 46 percent. Unlike HAMP, the SUN Initiative bears more resemblance to the Depression-era Home Owner’s Loan Corp., putting individual homeowners at the center of the relief, rather than trying to nudge mortgage lenders to do the right thing at their discretion. And the proof is in its achievement.

“The goal is to use the expansion experience as a template, to move into other markets where the bubble price and the market price are different,” Cherry told Salon.

Given the evidence, it appears facilitating principal reductions at the local level by simply buying out the loans has a better chance of success than using a controversial eminent-domain scheme that could backfire. But in both cases, we’re still only talking about hundreds of loans, when there are millions of underwater mortgages across the country. The real solution here, the one with the appropriate scale, is for the federal government to pursue this type of program itself. But Fannie Mae and Freddie Mac, which could get some of the way there, have rejected principal reduction, despite their own numbers showing it would create a financial benefit.

Until then, we have to rely on people like Elyse Cherry to create the win-win that people in power should have been doing all along. Cherry’s ready to step aside whenever Washington comes to its senses.

“If government decides to pursue this,” she said, “I would be happy to be put out of business.”